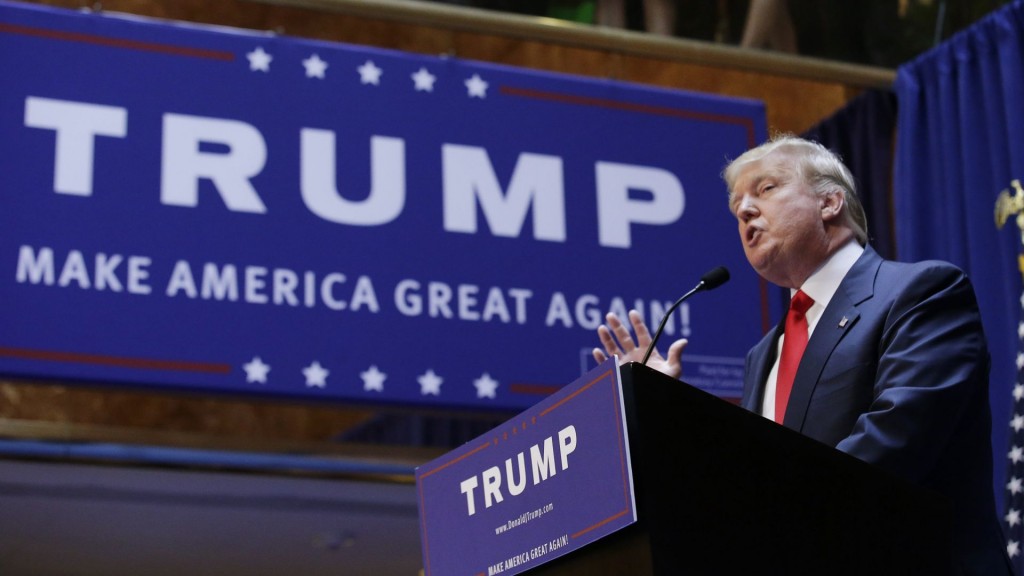 While on an aerobic machine at the gym, I caught Trump on TV. It occurred to me that Trump’s high poll numbers really represent the American people vs the America hating Left. Trump’s campaign slogan is “Make America Great Again.” Them’s fightin’ words to the Left.

For decades the Left has used its domination of the media and public education to indoctrinate our kids into believing that it is racist and mean to think of America as great. The Left says such pride and patriotism is an insult to the rest of the world.

You think I am crazy? Public elementary schools banned Lee Greenwood’s “Proud to be An American/God Bless the USA” in NY and Florida, thus far. http://bit.ly/1KppiLT

A Brooklyn elementary school principal blocked patriotism from teachers’ plans for a school assembly. Students were going to march in carrying US flags while singing a patriotic song. Here is one of the offensive lyrics. “I’ll always do my part, I love my land that’s free.” http://nydn.us/1IVEoJ6

Professors at the University of California, Irvine join students in trying to ban the America flag on campus because they say it contributes to racism. http://fxn.ws/1hFZWCE

Years ago a white friend told me her son came home from middle school a tearful basket case. He was filled with guilt about the evils his white forefathers thrust upon minorities. Today, my friend’s son is an America hating Communist. He also believes white males are the greatest source of evil in the world.

A product of public education, a millennial relative said she would be traveling near South Dakota. I suggested she visit Mt Rushmore. Her reply was venomous, “I wouldn’t travel across the street to see those guys.”

Trump saying such things as wanting to “make America a winner” and “make our military strong” is extremely crass to the Left; repulsive as showing Dracula the cross.

Despite being drilled by the Left to hate their country, I believe American youths instinctively desire to love their homeland. Trump is making it okay to say it out loud.

Even some Republicans are uncomfortable with Trump boldly advocating for America; vowing to make decisions in our best interest. Well trained by the Left, most professional politicians cringe hearing Trump say take the oil, make Mexico pay for the wall and stop giving money to countries that hate us. Talk of putting America first infuriates liberals; deeming it racist and insensitive to the global community.

Ann Coulter is a rare voice on the big stage clamoring for an immigration policy rooted in America’s best interest rather than people to whom we owe nothing. Most pundits fear Leftists branding them racist, heartless and cruel. Consequently, Coulter’s unapologetic common sense is rare.

Not only do Leftists support Obama governing against America’s best interest, they have been cheerleaders for his long list of decisions designed to tear down our country. Obama’s latest betrayal is his insane Iran nuke deal.

Displaying off-the-chain condescension, Obama repeatedly tells us, issue after issue, we are not seeing what we are obviously seeing. For example. Obama says his deal prevents Iran from getting a nuclear bomb. Meanwhile, it is obvious to the world that Obama is green-lighting Iran acquiring a nuclear bomb. Obama’s ego is boundless. For crying out loud, Iran is already breaking the deal. http://bit.ly/1UMiOOy

Despite this Administrations’ pattern of telling us we are not seeing what we are obviously seeing, Admiral Lyons says Obama’s strategy is simple for any thinking American to see. “It’s anti-American; anti-western. It’s pro-Islamic. It’s pro-Iranian and pro-Muslim Brotherhood.” http://bit.ly/1K1MW5j

Obama, Hillary Clinton and John Kerry know Americans would reject dethroning us as the world super power and making citizens subservient to government. Insidiously, this Administration masks its betrayals with lofty words like fairness, compassion and patriotism. Obama’s definition of patriotism includes opening our borders to illegals – taking our guns – taxing businesses out-of-business – repealing Constitutional freedoms and addicting as many able-body Americans to government assistance as possible.

Then along comes this outsider untamed by PC. Fearlessly, he speaks the truth. Wait a minute. This is a crazy way to run a country. I’m gonna make America great again! The people heard and responded positively. The Left is outraged.

This is not an endorsement of Trump for president. I am simply saying the Left’s hatred of Trump’s message reflects their hatred of America and those who love her.

One thought on “Hating Trump’s Message”