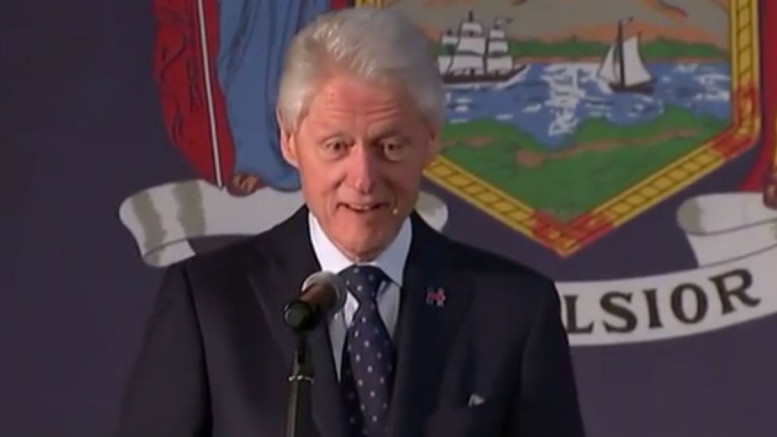 Hillary, democrats and mainstream media have nurtured the hate-group since its infancy. Why? The reason is Black Lives Matter serves their purpose by furthering the lie that blacks are forever victims in a forever racist America. This enables the Left to sell blacks the lie that voting for democrats is the only way to keep white racist America at bay. The modern Democratic party leadership is divisive and insidiously evil.

BLM was birthed out of the Ferguson riots, founded on the lie that poor innocent black boy Michael Brown was gunned down while attempting to surrender with his hands up. A typical white cop, foaming at the mouth with rabid racism, blew Brown away. Oh, and Brown was murdered on his way to visit his grandma.

The truth is Brown had a hefty juvenile criminal record including a second degree murder charge. http://bit.ly/1oJ6W4O Surveillance video showed the 300lb thug robbing a convenience store; towering over the small shopkeeper, Brown grabbed him by the throat and assaulted him. http://bit.ly/1uT5BJd

Confronted by a police officer, Brown was shot while reaching inside the police car trying to wrestle the officer’s gun away from him. http://bit.ly/1V2je6K And yet, democrats and mainstream media ignored the facts; purposely fueling the flames of racial divisiveness and hate by promoting the lie that Brown was shot with his hands in the air surrendering.

I felt like throwing a brick through my TV when the Grammy Awards featured a production number in homage to the Michael Brown “Hands Up Don’t Shoot” lie. I thought, “Why on earth would these people who claim they care so much more than the rest of us about black youths and racial harmony, promote this outrageous hating-generating lie?”

Incredibly, the Left chose not to report or condemn a mob of BLM protesters marching down a NYC street chanting, “What do we want? Dead cops!” http://bit.ly/1BMKT1t

Democrats love BLM spreading the lie that all issues plaguing blacks are due to white privilege and white racism.

The Clintons, democrats and mainstream media are swift to gang-assault any Republican or white pundit who dares suggest blacks assume some responsibility for their woes. Remember the Left’s vitriolic attacks on Bill O’Reilly for compassionately encouraging blacks to implement behavioral changes to help themselves? Everyone knows out-of-wedlock births, dropping out of school, black on black crime and addiction to government dependency are taking a devastating toll on black economic growth and quality of life. http://bit.ly/1HU2tPy And yet, the Left’s rule is criticizing black behavior in any way is racist, punishable by high-tech beheading in the public square.

But when BLM attacked Hillary, Bill threw the Left’s rule out the window. He pushed back with the truth about the hate-group funded by gazillionaire anti-American zealot George Soros. http://bit.ly/1S7L14Y

Over the years, I have prayed for guidance and written countless articles; praying this will be the one that removes the scales from the eyes of my fellow blacks, making them able to see the lies, exploitation and betrayal of the democrats.

Take the issue of blacks and the America Dream. Blacks are clearly living the American Dream, prospering in practically every arena of American life. And yet, blacks feel it is racially disloyal to admit this obvious truth. Blacks feel required to support the Left’s lie that America is a hellhole of racism, stifling black Americans. This lie fills black youths with hopelessness, resentment and hate. Why not physically assault whites for being white http://bit.ly/20nPKzx, loot, give up on school, join gangs and sell drugs to get their fair-share?

I caught a TV show featuring small business entrepreneurs. A segment showcased a black woman who quit her job as editor and chief of a prominent black magazine to start a bed and breakfast. After being open a few months, the city closed her down due to outrageous overreaching regulations. She went through legal hell to reopen. http://bit.ly/1W69uHz I felt like screaming at the TV, “Why do you continue to vote for Democrats who hate capitalism and demonize small business?” No, I cannot confirm that the black business owner votes Democrat. However, given that the magazine she ran is extremely liberal, I suspect she is a loyal Democrat voter.

My point is this successful black female entrepreneur is obliviously living her American dream. She now owns three B&Bs. And yet, I bet you a dollar to a doughnut that she believes all the Democrat standard lies; America is anti-black, anti-woman and her greatest opposition is conservative Republicans. The reality is the greatest enemy of freedom and obstacle to American prosperity is the Democratic party. They hate capitalism and seek to control every aspect of American life via tyrannical government overreaching regulations. Yes, blacks who choose to be Democrat zombies, ignoring the truth staring them in the face drive me nuts!

So no, Bill Clinton will not get any brownie points from me for challenging BLM hate-mongering scum. You dems have been playin’ my people for far too long. I can not wait to get your ilk out of our White House, replaced with a true real man of the people, Ted Cruz.