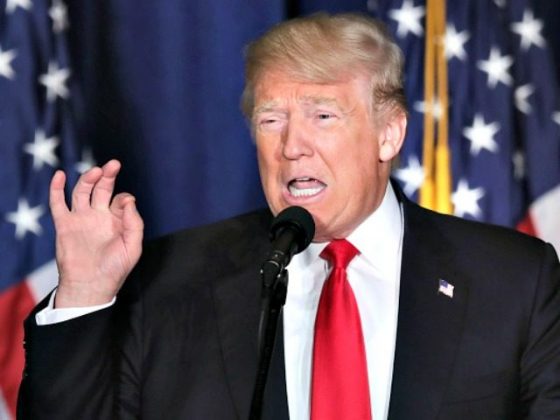 Trump was naïve to the extreme in talking about cooperation with Russia. For example, he repeatedly talked about the threat posed by Iran, without noting that Iran’s main sponsor is Russia. Trump cannot be tough with Iran while playing nice with Russia.

Trump claims to be for Israel, but he ignores Russian backing for the Iranian nuclear weapons program. This makes no sense, except from a pro-Russian point of view. The Iranian threat is made possible by Putin.

Trump said he wanted to pressure China to do something about North Korea’s nuclear program. But China and North Korea are both communist countries. They have a treaty together. North Korea also has a treaty with Russia. The international communist movement is alive and well. China backs North Korea for ideological reasons.

“If President Obama’s goal had been to weaken America, he could not have done a better job,” said Trump. But what is Trump’s goal? Trump failed to articulate a policy of regime change in Russia that would put Putin on trial for violations of international law and crimes against humanity in Ukraine and Syria.

Moscow has created much of the conflict in the Middle East and around the world that threatens the U.S., Europe and Israel. Trump seems oblivious to Russian aggression.

Trump says we can join with Russia against Islamic terrorism. But some experts say the Russians are behind ISIS, al-Qaeda and other Islamic terrorist groups, for the purpose of destabilizing the region and helping Iran expand.

Trump’s approach is the same attitude that characterized the Obama/Clinton administration. After Hillary’s disastrous reset with Russia came Russian membership in the World Trade Organization and more Western investment in Russia. Then, Obama mocked Mitt Romney during the 2012 presidential campaign for calling Russia a geopolitical threat. Now, Trump proposes to ignore the Russian invasion of Ukraine and engineer a reset of his own with Putin. Perhaps Trump’s attitude is driven by his history of trying to do business deals with Moscow.

In one of his most naïve moments, Trump said, “I believe an easing of tensions and improved relations with Russia, from a position of strength only, is possible, absolutely possible. Common sense says this cycle, this horrible cycle of hostility must end, and ideally will end soon. Good for both countries.” A position of strength would seem to dictate that we confront Russia in Ukraine by supporting the government and people there. They want to be free of Russian control. Trump says America should be the leader of the Free World. Yet Trump just hired an adviser who was a member of the team backing the communists in Ukraine. Another Trump adviser works for a Russian gas company.

The billionaire businessman has a strange blind spot when it comes to Putin’s Russia.

A position of strength means confronting Russia over its support of Iran. Trump said, “We desire to live peacefully and in friendship with Russia and China. We have serious differences with these two nations, and must regard them with open eyes, but we are not bound to be adversaries. We should seek common ground based on shared interests.”

What “serious differences?” Ukraine? Trump didn’t mention that. What common ground is there with Russia?

Kissinger has been praised by Hillary Clinton, who says, “Kissinger is a friend, and I relied on his counsel when I served as Secretary of State.” But Kissinger’s work as Secretary of State, and subsequently as a consultant to foreign companies and governments, has resulted in the building up of Russia and China at American expense. Kissinger also engineered our defeat in Vietnam, with the help of a liberal Congress.

Today, our top generals say Russia is the greatest threat to the United States, an ”existential” threat, meaning the Russians can incinerate our nation because of their nuclear weapons advantage. Trump talks about modernizing the U.S. nuclear arsenal, but without being critical of the growing Russian nuclear threat. This strange deference to Russia ran throughout the entire speech.

In throwing out some red meat to conservatives, Trump said, “We will no longer surrender this country or its people to the false song of globalism. The nation-state remains the true foundation for happiness and harmony. I am skeptical of international unions that tie us up and bring America down and will never enter America into any agreement that reduces our ability to control our own affairs.”

Will he get the U.S. out of the U.N. and/or its many agencies? That’s the real test of being against globalism. But rather than get us out of the U.N., it looks like Trump will work with Russia and China on the U.N. Security Council.

Despite the media buildup for the speech, it’s clear that on the matter of the U.S-Russian relationship Trump doesn’t represent a real change from the policies of the Obama/Hillary administration. A contest between Hillary and The Donald means the Russians emerge as the winners—no matter who wins. Another Russian reset is in the cards, compounding the American weakness that Trump says he wants to do something about.