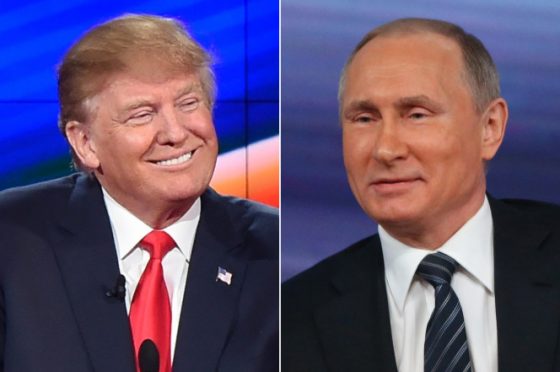 Commenting on Trump’s “reassuring” foreign policy speech, the usually astute Horowitz said it was “a step towards satisfying his conservative critics…” He said Trump had rejected “the neo-conservative dream of democratizing the world” and had instead emphasized an “old-fashioned conservatism” based on “limited foreign policy goals and stability, as the framework of peace.”

Under Obama’s similar limited foreign policy goals, Russia is making major gains, threatening the peace of Europe. Its allies Syria and Iran are on the march in the Middle East. The “old-fashioned conservatism” of someone like Ronald Reagan would never have glossed over the gains made by our enemies. But Trump did.

Horowitz added, “Can’t wait for those Trump-Hillary debates,” a signal from his perspective that the race is over on both the Republican and Democratic sides.

From this perspective, it looks like a debate between two security risks who have no real understanding of the major threats to America and our allies.

Horowitz wrote, “If Mitt Romney had given the speech that Donald Trump did today, and if he had followed its strategy during the third presidential debate with Obama on foreign policy, he would have won the 2012 election.” Romney at least recognized Russia as a geopolitical threat. Trump sounds like Obama or Hillary Clinton, who engineered a disastrous reset with Russia.

In retrospect, Romney looks like a statesman, ahead of his time and aware of the dangers we face. Trump has learned no lessons from the recent history of Russian aggression.

A separate article on the FrontPageMag site by Matthew Vadum was also complimentary toward Trump, calling his speech “important” and “muscular.”

Frederik Pleitgen, the CNN international correspondent, reported the euphoria in Russia over Trump, in part because the speech “did not mention Ukraine at all…” But since Trump didn’t take any questions, he wasn’t confronted about this curious omission.

By comparison to Obama, some conservatives are saying that Trump looks pretty good.

Vadum’s article notes that our “Radical-in-Chief now occupying the Oval Office,” Barack Obama, has or had sidekicks and mentors like Jeremiah Wright, Bill Ayers, Rashid Khalidi, Valerie Jarrett, and Frank Marshall Davis. But Trump has Paul Manafort, who worked for the communists in Ukraine, and Carter Page, an adviser to a Russian gas company. Plus, Trump himself has been doing business in Russia and the old Soviet Union. One of his sons has been involved in looking at Russian real estate deals.

The failure by the liberal media to vet Obama should not cause the conservative media to excuse Trump’s curious associations and omissions.

Those pro-Russian connections explain what we are witnessing in Trump. It was as if Trump during his address was promising “Peace in our time” with Russia. The parallels were frightening, and they went far beyond the echoes of the “America First” mentality that sought to keep America from fighting fascism in Europe before World War II.

How well did ignoring aggression work with Neville Chamberlain and Adolf Hitler?

In addition to an invasion producing thousands of deaths in Ukraine, there’s the Russian record of crimes against humanity in Syria. The Atlantic Council reports, “Putin cynically claimed that the purpose of the mission [in Syria] was to fight ISIS. Nothing could be further from the truth. Russia rarely targeted ISIS in Syria…” Instead, it says Russia’s role was to bolster the regime of Bashar al-Assad, undermine the American-supported Syrian opposition, and prolong the conflict.

The report’s title, “Distract, Deceive, Destroy,” sums up the Putin strategy. Equally significant, the Atlantic Council notes that in prolonging the war, Russia has succeeded in sending “more waves of refugees flooding into Turkey and Europe.”

This is an area in which Trump has practiced his own version of distract and deceive. Opposition to Muslim immigration is his signature issue. He warns that the U.S. should not have to suffer the same fate as Europe. Yet Russia is a significant factor behind the Muslim invasion of Europe. Air Force General Philip M. Breedlove, the Supreme Allied Commander, Europe, and commander of U.S. European Command, has publicly said, “Russia and the Assad regime are deliberately weaponizing migration from Syria in an attempt to overwhelm European structures and break European resolve.”

Trump did not hold Moscow responsible for any of these Muslim refugee problems. He did not attack Moscow for intervening in Syria in such a way as to leave ISIS virtually untouched. Instead, he attacked the United States. Trump said, “Our actions in Iraq, Libya and Syria have helped unleash ISIS, and we’re in a war against radical Islam, but President Obama won’t even name the enemy, and unless you name the enemy, you will never ever solve the problem.”

Our top generals have named the enemy that Trump won’t. And that enemy is Russia. Russia has “chosen to be an adversary and poses a long-term existential threat” to the United States and U.S. allies and partners in Europe, Breedlove said.

Our generals understand that radical Islam and Russia have to be recognized as our enemies. Trump focuses on the former but not the latter. He pretends that the U.S. can work with Russia against radical Islam, when the Russian intervention in Syria proves the exact opposite. Russia is making the Muslim refugee crisis much worse.

We saw news on Friday about how the Syrian air force—backed by Russia—had bombed more civilians and anti-Assad groups in Aleppo. A hospital was hit, killing dozens, including patients, children, and medical staffers. Obama’s Secretary of State John Kerry said he was outraged. He released a statement saying:

“We are outraged by yesterday’s airstrikes in Aleppo on the al Quds hospital supported by both Doctors Without Borders and the International Committee of the Red Cross, which killed dozens of people, including children, patients and medical personnel. It appears to have been a deliberate strike on a known medical facility and follows the Assad regime’s appalling record of striking such facilities and first responders. These strikes have killed hundreds of innocent Syrians.”

In a pathetic plea, Kerry said Russia “has an urgent responsibility to press the regime to fulfill its commitments under UNSCR 2254, including in particular to stop attacking civilians, medical facilities, and first responders, and to abide fully by the cessation of hostilities.”

U.N. resolution 2254 is supposed to be the peace plan for Syria.

Will Trump at least tweet a few words of concern about the actions of Russia and its client state?

On top of this threat, as we noted in an earlier review of the Trump speech, the GOP frontrunner sounds tough on Iran while ignoring Russian sponsorship of the Iranian regime. It’s a nonsensical position. You can’t punish Iran without putting the squeeze on Russia.

Trump’s strange deference to Russia is alarming. It’s no wonder that the Russian ambassador to the United States was invited to sit in the front row as Trump delivered his foreign policy address.

We don’t know if he was applauding wildly, but it’s clear he had to be very satisfied with what he heard from the Republican candidate. The mystery is why Horowitz would find the extremely flawed and even shocking Trump speech so satisfying.

If Trump were to win the nomination and the presidency, we could anticipate our top generals desperately trying to counter the pro-Russian advisers who now surround him. Eventually, they might have to threaten to resign in disgust and dismay. The stakes are that high in Europe and the Middle East.

Horowitz is correct when he talks about how Obama’s agenda has been “American weakness.” But Obama at least gives lip service to the people of Ukraine and Syria. Trump is clearly on the other side—Russia’s side. He doesn’t even give lip service to people struggling for freedom and democracy.

Trump does give lip service to Israel. But how reassuring can those words be when Trump is promising to collaborate in a Russian takeover of Europe and the Middle East?

Peace in our time? Ask the Syrians. Ask the Ukrainians.

What’s been lacking in the Republican presidential contest is a Winston Churchill who will call Trump’s bluff and identify all of America’s enemies, including Russia, by name. Romney did it back in 2012, before events proved him right. Who will do it now before Trump takes the nomination in Cleveland and makes the Republican Party into a presidential vehicle for Vladimir Putin’s favorite foreign politician?