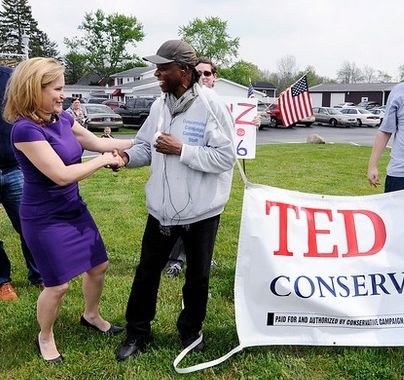 Indiana is truly heartland country. Mary and I have noticed several large families projecting a people of faith aura. Liquor stores are closed on Sunday. Traditional values which have made America great appear to still be celebrated here in Indiana.

Our CCC team attended the taping of the Fox News town hall in Indianapolis Indiana. A local high school allowed 60 students to attend. Several other families brought their kids. It was truly encouraging seeing the hall filled with youths excited about Cruz. Thank God that they have not drank Bernie’s (government rob others to give to you) poisonous Kool-Aid.

A waitress told Mary and me that small business is huge in Indiana; many grocery stores and restaurants are owned by married couples. She has been a happy and proud employee of the same couple for many years. Her bosses now own several restaurants. I detected a vibe supportive of Cruz.

I don’t know about you guys, but I have come to realize that I can not figure it all out. All I know to do is to follow God’s lead, using the information I have to do everything I can to propel Cruz to victory.

Our CCC team implemented standard campaigning initiatives for Cruz. If you’re in Indiana, you could see our CCC team sign waving, Mary and me holding our “Ted Cruz: Conservative Hero” banner. It is crunch time folks. Everyone must do their part.

Thank God that I am wise enough to know that my “little becomes much” when I place it in the Master’s Hands. C’mon folks, let’s get Ted another victory in Indiana, this Tuesday. God bless, Lloyd