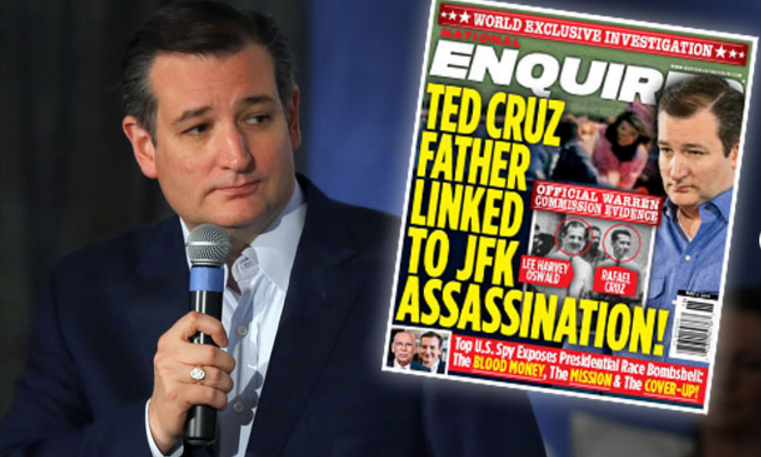 The irony is that one of Trump’s other close associates, Roger Stone, wrote a book trying to implicate JFK’s vice president, Lyndon Johnson, in the murder of the president—not Lee Harvey Oswald.

Referring to Senator Ted Cruz (R-TX), his main opponent at that point in the campaign, Trump appeared on “Fox and Friends” and, without rebuttal, said, “His [Cruz’s] father was with Lee Harvey Oswald prior to Oswald’s being, you know, shot.” He added, “Nobody even brings it up, I mean they don’t even talk about that. That was reported and nobody talks about it.” Cruz told ABC News, “It’s ludicrous, it’s ludicrous. I was never in New Orleans at that time.” He added, “That’s typical of Donald Trump—just attack and make all kinds of innuendo and attacks with no substance.”

Those who have followed how this bizarre charge arrived in the pages of the National Enquirer have also looked at the various outlets of disinformation, many with links to Moscow or Tehran, which also picked it up. Taken together and analyzed in broad terms as a foreign-instigated propaganda ploy, the charge against the father of Senator Cruz reflected the desperation among those who had feared that Cruz would derail Trump’s campaign in the Indiana primary and stop Trump’s march to the nomination. With Cruz out of the way, Trump can complete his hostile takeover of the Republican Party and make it into a carbon copy of the nationalist and populist European parties that have divided Europe and treated Russian President Vladimir Putin as a statesman in foreign affairs.

Trump’s sympathizers saw Cruz as a real conservative whose views made him a foreign policy realist, committed to Ronald Reagan’s vision of peace-through-strength. By contrast, Trump wants to make deals with Moscow and pull back from American support for NATO and U.S. allies in Europe and Asia. With Cruz out of the way, it doesn’t seem to matter much to Moscow whether Trump or Hillary Clinton wins in November. Either way, the Russians and their surrogates stand to make more aggressive moves in Europe and the Middle East.

Here are some of the titles, sources and dates of how the phony story appeared in various outlets, beginning with Madsen:

Once Trump picked up the National Enquirer story, Iranian Press TV went into action, running a report, “Trump accuses Ted Cruz’s father of having ties with JFK assassin.” The reaction among followers of the Iranian “news” agency was ecstatic. Here are a few responses: