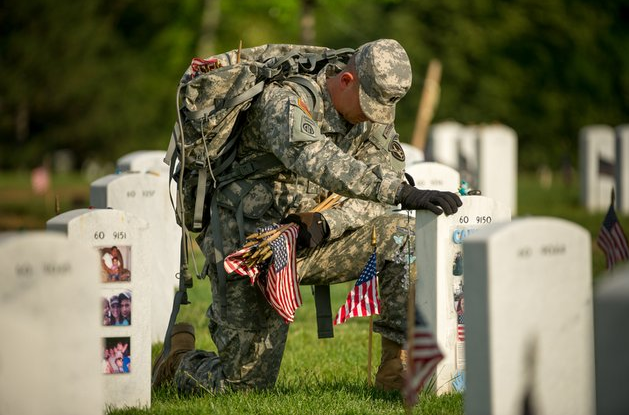 A few Memorial Days ago, I recall myself comfy on the sofa overstuffed with cookout delights, watching a documentary on TV about conscientious objectors. The program portrayed these guys as moral superiors. I thought, “You guys are able to bloviate about the evils of war and pursue careers as American artists, college professors and so on because other brave young men went to war to fight for you; defending your freedom.”

Another Memorial Day TV program featured WWII soldier and character actor Charles Durning. Durning earned three Purple Hearts. He was awarded the Bronze and Silver Stars for valor and the World War II Victory Medal. The French consul presented Durning with the National Order of the Legion of Honor.

At the 2008 National Memorial Day Concert, Durning stood at the podium and wept for his fallen brothers. Wow! Do they make character driven courageous men like that anymore? http://1.usa.gov/20mZ3yW

I served in the US Army stationed at Ft Bragg NC, drafted from 1969-1971. My entire battalion received orders for Vietnam accept myself and another soldier. Thus, I never experienced serving in a combat zone.

My buddy, Gerry “Boats” Milhollen experienced combat in Vietnam. He suffered night terrors for several years and other emotional issues which cost him his marriage. Gerry said what pained him and fellow combat vets the most is that unlike other US troops returning from war, they never received a welcome home. Quite the opposite. Vietnam vets were spat upon and called baby killers.

I asked Gerry to share his thoughts in a tribute I recorded a few years ago titled, “Welcome Home Brother.” http://rvrb.fm/1kznUgL

I was in my late teens when my cousin Jackie’s husband Norman Byrd was drafted and sent to Vietnam.

Norman never returned home. It was all pretty surreal. I found his name on the Vietnam Veterans Memorial Wall in Washington DC.

My daughter recently retired from the US Navy. She went in directly after high school and worked her way up to retiring as an officer. Her cousins on her mom’s side lived in the mean hood of west Baltimore. Many became addicted to drugs. One of her cousins was murdered by thugs.

I remember my daughter telling me that when she came home on leave after basic training, she immediately noticed that she no longer had much in common with her friends. They were still kids and the military made her an adult.

My daughter said before she retired, it pained her to see what the Navy was becoming. The discipline which had molded and shaped her was being thrown out the window due to political correctness. She said rather than training sailors, she felt like a babysitter.

I heard a black preacher tell his congregation that he would love to see the government go through the ghetto scooping up fatherless young black men for the military. They would learn to shut-up, respect authority and receive a paycheck for a job well done. While the preacher’s comments were tongue-in-cheek, I get his point and agree. Despite it being under attack by Obama http://bit.ly/1RkvWWJ, Leftist social engineering and political correctness, the US military is still a pretty good place to turn youths into responsible adults.

Traveling the country on Tea Party Express, I had the pleasure of meeting Debbie Lee, the gold star mom of Marc Alan Lee, the first Navy Seal to die in Operation Iragi Freedom. In honor of her decorated son, Debbie founded AmericasMightyWarriors.org which helps the families of fallen soldiers. I organized patriot music artists across America to record a song titled, “Taking Back America”. We selected 44 songs from the artists to be included in a project titled, Tea Are The World”. All the proceeds benefit Debbie’s AmericasMightyWarriors.org. http://bit.ly/1YRLAPd

While enjoying your family cookouts, please reflect and give a nod to those whose courage and sacrifice made it all possible; the US military.

Have a happy and blessed Memorial Day.