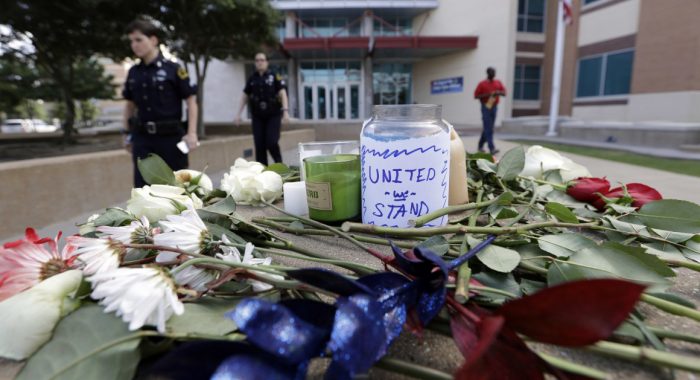 The racial divide in this country, as it exists today, is completely manufactured. It is manufactured by the political and activist class, and for reasons symbiotic to one another.

Politicians need to divide our nation so as to pit demographic against demographic; in order to create political party “battle lines.” This is how they create an “us against them” scenario. True Statesmen and public servants seek to better the nation in ways that are good for all of the population, not just a sympathetic demographic. That does not exist in our country today. True government of and for the people is dead.

Activists – mostly products of the victimhood and grievance class – need to divide to define special interest demographics, again to pit “us against them.” It is how they attain power and influence, as well as wealth for their “movements.” This is serious wealth. One need only look at the personal trappings of Jesse Jackson or Al Sharpton to understand this.

Are there bad cops? Yes. Are there good cops that make bad decisions? Yes. But these are anomalies, not the status quote as the fraudulent #BlackLiveMatter movement, race-baiters and the Obama Administration would have you believe.

As a former first-responder I can tell you that even in the most remote locations, each day a man or woman puts on a badge to go to work, they simply want to do their jobs and come home to their families and friends. There is no other agenda than that. It is a goal. And sometimes, as in Dallas, that goal goes unachieved.

The manufactured racial divide now instituted in our nation is starting to take lives; it is fomenting in acts of domestic terrorism. At this point, the militants taking the shots are Black militants. They are targeting law enforcement and the first-responder community. It is perverted.

The fear among the situationally aware is that other intellectually stunted or militantly activist people and/or organizations that are not Black will be moved to retaliate. Many who are of the mind that a “race war” was by design; conceived and facilitated by Progressives attempting to maintain power through the chaos of “national emergency” will assume vindication at this possibility.

But this fear can only become a reality if thinking Americans – which are the overwhelming majority of our people – abandon the color blind society that we created for ourselves through the pain and growth of the 1960s and 1970s. If we do not give into the divisiveness of fear, they cannot achieve their goal of dividing America for purposes of maintaining power and fundamental transformation.

In this specific case, the catalyst for the carnage was not that a Dallas Police Officer shot a Black man. It was not that access to a “gun” caused this crisis. It was that a group of Black men whose minds had been poisoned to a manufactured racial divide pulled the triggers – repeatedly – to assassinate five police officers; wounding many more.

It is up to We the People to work through this. The Obama Administration is not on our side where this is concerned, nor is the media hacks or the ascribing punditry.

And as we do work though this, let’s all remember one thing: Those men and women who are wearing the badges, even as falsely motivated militants target them for assassination, they just want to make it past the end of their shift, doing the jobs that others fear to do, to achieve their goal of going home.

My condolences to the families, friends and brothers and sisters of the badge who have been touched by this senseless and unnecessary event.