What is terrifying and pathetic is the Obama White House and both Secretaries of State Hillary Clinton and John Kerry have been stooges of Putin….groveling for normalcy just as they have with the regime of Iran. This is an administration that is normalizing relations with all terror regimes across the globe that include North Korea, Cuba and Venezuela. Hillary said thatBashir al Assad of Syria was a reformer when 400,000 Syrians are dead and 4-5 million have left their homes. Then, we all remember that the Obama White House negotiated with Qatar to released 5 Taliban commanders in exchange for one Army deserter. Talks have been ongoing with the Taliban for years until just recently.

But back to Russia….before the hacking, to sway and or interfere with U.S. elections.

Related reading: Hey FBI, the Investigation into the DNC Hacking is Over Here

No one is admitting that Russian in cadence with WikiLeaks has hacked Hillary’s campaign systems, DCC and the DNC as well as other government systems. Why? Perhaps diplomacy due to talks continued talks with Iran and ending the civil war in Syria. Remember that ‘red-line’ on chemical weapons use.

So, let’s go back a way, like over a decade and up to just a couple of years ago when it came to Russian spies in the United States, shall we? This is for perspective and how the Obama administration including his National Security Council and the State Department continue to ‘omit’ history…

Espionage continues and tactics have not changed for Russia where cyber intrusions have replaced in country operatives, however a look at those operatives’ skills and missions must not be overlooked or dismissed.

DailyNews: Sultry former Russian secret agent Anna Chapman ended an exchange with NBC News almost before it began when she was pressed about her playful Twitter marriage proposal to NSA leaker Edward Snowden.

Here is the official criminal complaint and summary of how the FBI tracked her actions filed in 2010. The file also includes an additional spy Mikhail Sememko. This actually began in 1990….yes 1990.

But actually there were 8 more Russian spies and this is the criminal complaint for that case. What is fascinating here is the many stopovers in Latin America…..

The spying spree finally came to its end in the summer of 2014, when the trio were propositioned by a self-described investor who wanted to develop casinos in Russia. The scheme immediately drew red flags among the group, with Sporyshev offering that the proposal felt “like some sort of set-up.”

But despite his misgivings, Sporyshev didn’t stop Buryakov from meeting with the supposed investor, who was, in fact, an FBI informant.

For six hours on Aug. 28, Buryakov and the informant met in the anemic gambling metropolis Atlantic City. The informant, who claimed he had a well-placed source in the U.S. government, handed Buryakov documents that were labeled “Internal Treasury Use Only” and contained a list of Russians who were essentially blacklisted from doing business with the United States.

The valuable document earned the informant another meeting that day, when he offered Buryakov another official document that contained “a list of Russian banks… on which to impose sanctions,” according to the criminal complaint. More from DailyBeast.

Then there was a dead Russian, Mikhail Lesin. found in a hotel in Dupont Circle, Washington DC. A story that came and went real fast. 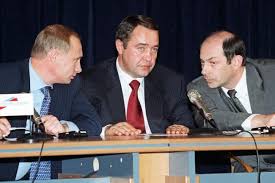 Mr. Lesin was a major figure in Russian media after the fall of the Soviet Union, first as an advertising executive and later as a top government official and media executive.

He had deep connections to the Russian state at the time Mr. Putin was reasserting his authority over the country’s rambunctious and freewheeling media. He was a crucial figure in that process, which began with the takeover of Russia’s first independent television channel, NTV, in the early 2000s, and was viewed with bitterness by many Russian journalists at that time.

He was Russian press minister between 1999 and 2004 — a time of increasing government pressure on independent journalists and media outlets in the country — and later served as a presidential adviser, spearheading the development of the government’s growing media and technology apparatus.

More recently, Mr. Lesin became head of Gazprom-Media, the country’s largest media holding company, in 2013, but resigned from that position in late 2014.

While still with the company in 2014, Mr. Lesin’s personal wealth attracted suspicion in the United States. Senator Roger Wicker, Republican of Mississippi, called for a Justice Department investigation, raising the possibility of corruption and money-laundering charges based on what he alleged were millions of dollars in assets, including $28 million worth of real estate in Los Angeles, controlled by the former civil servant. It is unclear whether such an investigation occurred. More here from the NewYorkTimes.

(Note: Three former U.S. officials said that a trip Flynn took last December to Moscow—where he was filmed sitting at the head table next to Russian President Vladimir Putin during a formal dinner—set off alarms within military and intelligence circles over whether Flynn had notified the U.S. government about his foreign travel, as his security clearance requires.

The Defense Intelligence Agency spokesman said that Flynn had given the proper notices. But a current senior defense official said that word of Flynn’s travel didn’t reach the office of Defense Secretary Ash Carter, and that Pentagon brass were taken by surprise that he didn’t notify the department.

That he would be working with the Trump campaign or pushing for better U.S.-Russian relations, even as the two nations are battling each other on the behalf of proxy forces in Syria, was less surprising, the official said.

“He’s always been a bit of a wild card,” he concluded.

Another former senior U.S. intelligence official who knows Flynn said that he recently praised Trump as a “skilled negotiator” during a meeting of security leaders and experts in Washington. This person said the pair had become so close that, were Trump to win the presidency, he would likely nominate Flynn as the next Director of National Intelligence, the top intelligence official in the government. Via DailyBeast)