Another oil price downturn threatens to deepen the plunging levels of investment in upstream oil and gas production, which could create a more acute price spike in the years ahead.

Oil and gas companies have gutted their capex budgets, necessary moves as drillers went deep into the red following the crash in oil prices. But the sharp cutback in investment means that huge volumes of oil that would have otherwise come online in five or ten years now will remain on the sidelines.

The industry will cut spending by $1 trillion through 2020, according to Wood Mackenzie. Those reductions are creating a “ticking time bomb” for oil supply. The consultancy projects that the market will see 5 million barrels of oil equivalent per day (mboe/d) less this year, compared to expectations before the collapse of oil prices. And next year, the industry will produce 6 mboe/d less than it otherwise would have had the spending cuts not been made.

This is creating the conditions for a supply crunch and a price spike. The reason is simple: demand continues to rise by some 1.2 million barrels per day each year, but supplies are no longer growing because of the spending cuts. That is not a problem today as production still slightly exceeds demand and high levels of crude oil and refined products sit in storage. But by as early as the end of 2016 the oil market could tip into a supply deficit. And because the industry has scaled back so intensely on capex, global supplies could fall short of demand for quite a while. The end result could be a dramatic price spike.

This scenario has been described before by Wood Mackenzie, which published an estimate earlier this year that put the total value of cancelled projects over the past two years at $380 billion, projects that would have yielded 27 billion barrels of oil and gas.

So far, the markets are not pricing in the brewing supply crunch. Oil prices continue to fall, and speculators have taken the most pessimistic position in months, selling off long bets and buying up shorts.

Oil analysts and forecasters do not see a rapid rise in prices either. A Bloomberg survey of 20 analysts revealed a median price forecast of just $57 per barrel in 2017. No doubt that record levels of inventories are on their minds – even if oil production itself flips into a supply/demand deficit, it could take years to work through storage levels.

“We’re looking at a market that’s still in a very slow process of rebalancing and we don’t think that you’ll get a sustainable deficit until the second quarter of 2017,” Michael Hsueh, a strategist at Deutsche Bank AG, told Bloomberg. “Those deficits are necessary to draw down global inventories, but that will still take until the end of 2018, it appears.”

But the swing from surplus to deficit could be more dramatic than many think. Now that oil is once again entering a bear market, with WTI and Brent dropping to $40 per barrel, the industry could be forced to slash spending even deeper than it already has, leaving even more oil reserves undeveloped. And in any case, it is possible that high storage levels and the two-year production surplus is leading to a myopic view of the future – just because the markets are oversupplied today does not meant that they will in several years’ time.

Wood Mackenzie says that while U.S. shale has been the hardest hit by the steep fall in investment, the shale industry will be the first to bounce back because of the short-cycle nature of shale drilling. The price spike will lead to a resurgence in shale, and Wood Mackenzie is predicting that shale production doubles from the 2015 high-watermark of 4.5 million barrels per day to 8.5 mb/d by the mid-2020s.

But that is a long way off for oil executives dealing with deteriorating balance sheets and rising debt levels.

By Nick Cunningham of Oilprice.com 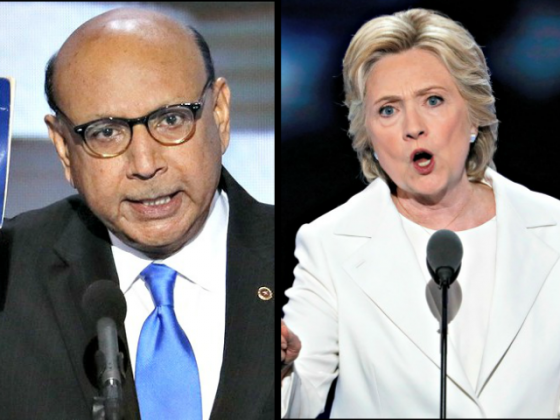 When Khizr M. Khan took to the stage at this year’s Democratic National Convention, he was a virtual unknown. But his message struck a chord with many people.

On stage Khan challenged Donald Trump’s knowledge of the U.S. Constitution and said that “You have sacrificed nothing and no one.”

Khan’s comments struck a chord with anyone who ever had a son, daughter, husband or wife, or parent who ever served overseas in a war zone. He and his wife lost a son who died performing a heroic act to save his fellow soldiers in Iraq. Democrats opportunistically saw this as yet another cudgel to use against Republican presidential nominee Donald Trump, to undermine his influence among Americans, particularly the military. The media saw a great opportunity to finally bury the candidacy of Trump. But as with many of these stories, the Khans turned out to be more than initially meets the eye. In this case, much more.

Trump, ever supremely confident, stepped into the media minefield, and agreed to an interview with ABC’s George Stephanopoulos, who, as we’ve previously pointed out, worked for the Clintons for years as one of their hit men. He was the communications director for Bill Clinton. And as the host of ABC’s This Week, Stephanopoulos failed to reveal an obvious conflict of interest—namely that he was a donor to the Clinton Foundation, and a featured speaker at their events. Despite these circumstances, Stephanopoulos attempted to discredit Peter Schweizer and his book, Clinton Cash, which documents many of the deals and pay-for-play that led to the Clintons raising about $3 billion. Yet the Clinton Foundation uses about 10 percent of its revenues for the causes they claim to be helping, or “direct charitable grants.”

Trump joined Stephanopoulos on his show, and was unprepared. “How would you answer that father? What sacrifice have you made for your country?” queriedStephanopoulos. As a result of his comments Trump is now accused of attacking Mrs. Ghazala Khan—but what he questioned was why she stood by silently. He actually called the Khans’ son a hero on Twitter, and said to Stephanopoulos that Khizr Khan looked like a “nice guy.” Trump’s criticisms were aimed at Islam, where women and gays are second class citizens—at best.

Here was that exchange during the March debate between moderator Jorge Ramos of Univision and Mrs. Clinton. But first a video clip was shown of Patricia Smith, the mother of information officer Sean Smith, who died along with Ambassador Christopher Stevens in the terrorist attacks at the Special Mission Compound in Benghazi on September 11, 2012:

PATRICIA SMITH: Hillary and Obama and Panetta and Biden and all of—and Susan Rice, all told me it was a video, when they knew it was not the video. And they said that they would call me and let me know what the outcome was.

RAMOS: Secretary Clinton, did you lie to them?

CLINTON: You know, look. I feel a great deal of sympathy for the families of the four brave Americans that we lost at Benghazi. And I certainly can’t even imagine the grief that she has for losing her son, but she’s wrong. She’s absolutely wrong.

Mr. Khan went on CNN’s State of the Union and described Trump as having a “black soul,” and being unfit for the presidency. While Mr. Khan quickly became a causecélèbre for the Democrats and the liberal media, Patricia Smith says that she “was treated like dirt. I don’t think the Khan family was treated that way. But I was treated like dirt, I was called a liar.”

Information has now started coming out about Khan’s own background. Amid the heightened scrutiny, Mr. Khan took down his website, which showed that he specializes in “E2 Treaty Investors, EB5 Investments & Related Immigration Services.” He explained to CNN’s Anderson Cooper that the website came down because “there is a risk that somebody will damage it, somebody may hack it. I asked them [the web host] what do you suggest. They said under such circumstances, we normally keep it offline when this madness will go away, we will bring it back. I asked them to do that.”

“The EB-5 is literally a ‘citizenship for sale’ program in which a visa for a whole family can be bought for as little $500,000,” Jessica Vaughan, policy director for the Center for Immigration Studies, told The Washington Examiner.

Khan’s website indicates that he used to work for the law firm Hogan & Hartson in Washington, DC from 1998 to 2007. Hogan & Hartson became Hogan Lovells in 2010. “That firm did Hillary Clinton’s taxes for years, starting when Khan still worked there involved in, according to his own website, matters ‘firm wide’—back in 2004,” writesMatthew Boyle for Breitbart. The law firm, “as Breitbart News has demonstrated is highly connected with the Clinton apparatus and with the Saudi government.”

New York Times reporter Nick Confessore accused Breitbart of conducting an “oppo dump,” or opposition research for one of its articles on Khan. New York magazine’s Annie Lowery also tweeted that the Breitbart research was an “oppo dump.”

Is it opposition research to look into the background of those in the media spotlight? I thought that was called good reporting.

It also turns out that Mr. Khan supports Sharia law, which runs counter to the meaning of the U.S. Constitution.

“In 1983, for example, Khan wrote a glowing review of a book compiled from a seminar held in Kuwait called ‘Human Rights In Islam’” in which he singles out for praise the keynote address of fellow Pakistani Allah K. Brohi, a pro-jihad Islamic jurist who was one of the closest advisers to late Pakistani dictator Gen. Zia ul-Haq, the father of the Taliban movement,” reports Paul Sperry for Breitbart News.

“Khan speaks admiringly of Brohi’s interpretation of human rights, even though it included the right to kill and mutilate those who violate Islamic laws and even the right of men to ‘beat’ wives who act ‘unseemly,’” continues Sperry. “Of course, such cruel and unusual Sharia punishments, ranging from stonings and floggings to beheadings, would be a flagrant violation of the Eighth Amendment of the United States Constitution.”

Mr. Khan aimed to lecture Trump about a Constitution which he himself apparently believes should yield to Islamic Sharia law. Khan’s 1983 paper, “Juristic Classification of Islamic Law,” states that “The invariable and basic rules of Islamic law are only those prescribed in the Shari’ah. …All other juridical works… must always be subordinated to the Shari’ah.”

In that same previously referenced CNN interview with Anderson Cooper, Khan statedthat “I do not stand for any Sharia Law because there is no such thing.”

“No one believes all Muslims represent an inherent threat to the safety and security of the American people. That would be foolish,” writes Joseph Farah for WorldNetDaily. “But to ignore the global pattern of violence and terrorism perpetrated on a daily basis by radical Islamic terrorists and state agents—not to mention oppressive tyranny of the most repulsive kind by many nation-states that deprive women, religious minorities and others of all their human rights—is simply the worst kind of disingenuousness.”

How did the folks at Breitbart discover these facts about Khan? Google. Apparently other media organizations didn’t take the time, or make an effort to find out who Khan is. Or maybe they did and just don’t care. I also want to recommend reading Allen West’s powerful message to Mr. Khan. Mr. West is a retired U.S. Army Lt. Colonel and former U.S. congressman from Florida, as well as a member of the Citizens’ Commission on Benghazi.