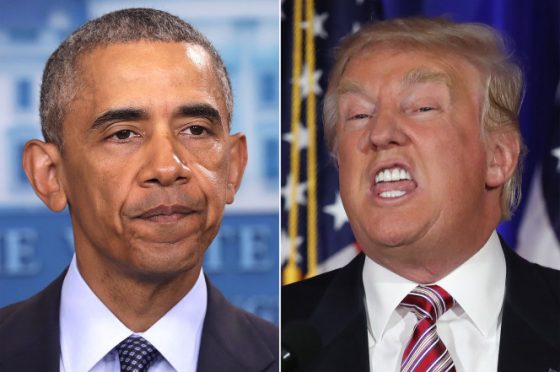 The famous painting of George Washington crossing the Delaware is now being sold by MAD magazine as Washington Cross-Dressing the Delaware. Elsewhere in the magazine, in a look at recycled ad slogans, the old Marine slogan, “We’re looking for a few good men,” has become the slogan for Grindr, the gay dating app. The humor is an indication of how things have changed under Obama. But many Americans aren’t laughing.

The Marine slogan, used for over 200 years, has now taken on perverted connotations because of President Obama’s “fundamental transformation” of the United States. He has been relentless in attacking the military’s traditional culture.

Yet it is Obama who is making headlines by attacking Donald J. Trump for “trash-talking” the military.

Under Obama, America’s military was humiliated when 10 sailors were captured and detained by Iran in January of this year. Iran aired a video of the sailors on their knees, with their hands behind their heads, and some of them crying. Obama sent the Iranians $400 million in cash later that month in conjunction with the release of five other American hostages. Undoubtedly some of that money will be used to finance terrorism against Israel and America.

But Trump is “trash-talking” the military?

Once declared by Newsweek to be America’s first gay president, Obama seems to have a very personal commitment to celebrating the gay lifestyle. He learned about the birds and the bees from his mentor, communist Frank Marshall Davis, a pedophile and pornographer.

Obama was designated the first gay president before it was announced that a Navy ship has been named after a major figure in the homosexual movement, Harvey Milk, who was fond of teenage homosexual lovers. This was followed by the announcement that the Department of the Interior was naming a gay bar in New York City as a national historic landmark. After that, Defense Secretary Ash Carter said that the Pentagon would pay for sex-change operations for military personnel.

This is considered “progress.” The military had already paid for sex change treatments for Bradley Manning, the traitor who became Chelsea, and who recently tried to kill himself/herself.

But it’s Trump who is “trash-talking” the military.

I have been searching in vain to discover any reaction to any of this from war hero Senator John McCain (R-AZ), who has been offended by some of the things Trump has said.

The only thing I can find is that McCain believes there should be hearings on lifting the ban on transgenders in the military. But isn’t McCain a member of the political party running the U.S. Senate? Why haven’t hearings already been held? Why isn’t Obama being sued or impeached for changing the rules and regulations of the Armed Forces without congressional approval?

Why is Obama so determined to obscure male-female differences and celebrate bizarre lifestyles that used to be considered perversions? And to do it in the military to boot?

Rather than talk about issues like the demoralization of the U.S. military through social engineering of a sexual nature, Trump appealed to the LGBTQ crowd in his convention speech.

I think the people he wants to appeal to would rather hear him denounce the idea of having a Navy ship called the USS Predator.

Nevertheless, the widespread rejection of Obama and Hillary is such that Trump is still getting huge crowds. Some say that as many as 20,000 turned out to hear him in Jacksonville, Florida on Wednesday night. He began the event by talking about the $400 million given to Iran by Obama. “How stupid are we?” Trump asked.

As a result of speaking his mind, Trump sometimes comes across as crazy in news accounts. But the transfer of $400 million in cash to Iran by the Obama administration, by any objective measure, looks even crazier. Yet the media defend the transfer as old news and suggest that critics of the deal are unhinged or playing partisan politics. This is an indication that the crazy way of doing things has become normal in Washington, D.C. No wonder people are flocking to Trump.

Meanwhile, Mrs. Clinton, who may be suffering from the lingering effects of the concussion she sustained in 2012, is being carefully guarded at public events with few people, so that she is not questioned in detail. Speculation is mounting that her health is such that she could suffer a stroke-producing brain aneurysm at any time.

Videos of Mrs. Clinton experiencing what some people are calling a seizure are circulating on the Internet. Defenders of the former First Lady say the videos are misleading, and that they simply capture some unusual facial expressions while she was having a good laugh.

MAD magazine is certainly good for a few laughs. It’s funny to see General George Washington, who ordered the court-martial of homosexuals during the Revolutionary War, wearing women’s clothes as he is crossing the Delaware. The laughter dies down when you realize that Obama has set the stage for modern-day generals to wear women’s clothes.

People may not like all the things Trump says, but they are so desperate for change from the suicidal course we’re on that they are willing to roll the dice.