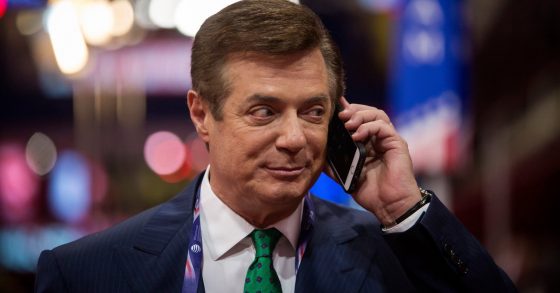 If anyone dares to tell me they are shocked by this, I may have to trout smack them into oblivion. Just sayin’.

Donald Trump’s #1 guy, Paul Manafort seems to have got caught with his paw in the Russian till. Secret ledgers have been discovered that show him receiving millions of bucks from the Russkies. Wonder if corruption was a prerequisite for being Trump’s campaign manager?

And you know who tweeted this first? Corey Lewandowski.

I would have sworn that Lewandowski was a plant for Trump, but this wasn’t very Trumpesque. Unless of course the point was to get back at Manafort and create an opening so he could return to the fold and give Paul the boot. Who knows?

From The National Review:

Anti-corruption officials there say the payments earmarked for Mr. Manafort, previously unreported, are a focus of their investigation, though they have yet to determine if he actually received the cash. While Mr. Manafort is not a target in the separate inquiry of offshore activities, prosecutors say he must have realized the implications of his financial dealings.

Gee, Manafort denied that any of this happened. Imagine that. Looks like he lied… so not surprised. It also appears that he was not only taking legitimate payments from political parties in the Ukraine, he was getting paid under the table clandestinely. One wonders why Manafort would be getting paid off the books… exactly what did he do to warrant this secretive payment of funds?

He came unglued over The New York Times exposing his income streams: “I have never received a single ‘off-the-books cash payment’ as falsely ‘reported’ by The New York Times, nor have I ever done work for the governments of Ukraine or Russia.” Right. I have seen far more than enough evidence to know that denial is utter bullcrap. This guy is a political consultant and a lobbyist. He’s parsing his words there. Notice how he chose them carefully… that doesn’t mean he didn’t work for an oligarch or a political party… or even Putin himself. It means he didn’t ‘directly’ work for one of those governments. Words matter, especially when dealing with sleazy shadowy political figures.

As previously noted at National Review:

Manafort’s friends describe his relationship with Yanukovych as a political love connection, born out of Yanukovych’s first downfall when he was driven from power by the 2004 Orange Revolution. Feeling that his domestic political advisers had failed him, Yanukovych turned to a foreign company, Davis Manafort, which was already doing work for the Ukrainian oligarch Rinat Akhmetov. The former Ukrainian PM and Manafort, the Georgetown-educated son of a Connecticut politician, hit it off.

Manafort’s firm had a set of international clients and produced an analysis of the Orange Revolution that Yanukovych found instructive, according to one operative involved in Yanukovych’s political rehabilitation. Manafort became, in effect, a general consultant to Yanukovych’s Party of Regions, shaping big-picture messaging, coaching Yanukovych to speak in punchy, American-style sound bites and managing teams of consultants and attorneys in both Ukraine and the United States ahead of an anticipated Yanukovych comeback. While it’s difficult to track payments in foreign elections, a former associate familiar with Manafort’s earnings say they ran into the seven figures over several years.

After Yanukovych’s 2010 victory, Manafort stayed on as an adviser to the Russia-friendly president and became involved in other business projects in Eastern Europe.

Russian-friendly doesn’t quite get it here. It went much deeper than that and I’m sure that Manafort was well aware of that fact. Manafort claims: “My work in Ukraine ceased following the country’s parliamentary elections in October 2014.” Well duh. Yanukovych was overthrown and that tends to put a damper on your corrupt connections. In February 2014, Yanukovych was whisked away by Russian special forces to a safe haven in Russia. And I sincerely believe the relationship with Manafort did not end there. 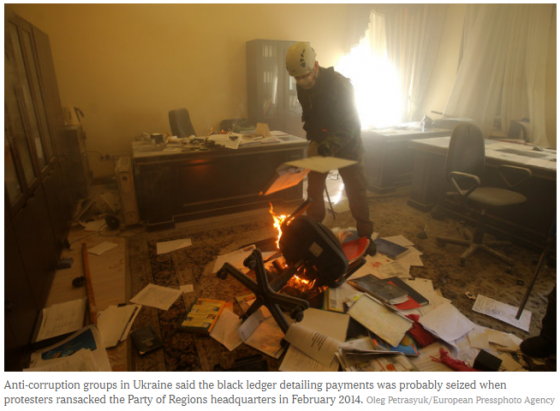 Criminal prosecutors are also looking into a group of offshore shell companies that helped members of Yanukovych’s inner circle finance their lavish lifestyles, including a palatial presidential residence with a private zoo, golf course and tennis court. Among the hundreds of murky transactions these companies engaged in was an $18 million deal to sell Ukrainian cable television assets to a partnership put together by Manafort and a Russian oligarch, Oleg Deripaska, a close ally of President Vladimir Putin. Very, very interesting.

As for Manafort saying that he quit working for Yanukovych in 2014, I find it curious that he had an office in Kiev until May of this year with furniture and personal items that were still there. Tie to that the documents just uncovered that suggest he was involved in looting Ukrainian assets and influencing elections and Manafort starts to look like a thug, if not an asset for the Russians.

The US has always viewed Russia as a threat and an enemy. Especially during the Reagan Administration. And they still should be viewed as such. But during the Republican Convention this year, things went sideways in an alarming way. Donald Trump and Paul Manafort did not oppose anything in the GOP plank… except for one item. They changed the platform to not call for arming the Ukrainians against the Russians. What does that tell you? Does it speak of Russian interests when the one thing that Trump focused on was a plank that supports the Russians directly? Hmmm? His campaign manager worked for those against the Ukraine and for Russia. Gee… usually the answer is the most obvious one and that one puts Trump and Manafort squarely in Putin’s camp. Since the convention there have been statements by Trump saying that he actually favors Russia annexing Crimea.

The Ukrainians are bluntly stating that Manafort had to know of the corruption. I’m sure he did… in fact, I’m certain he was in the middle of it waist deep. More and more of this will be uncovered as time goes by trust me. Manafort has his attorneys aggressively denying any of this, but it looks to me like they have found concrete proof of corruption.

I’m just wondering if Trump approached Manafort, or did Manafort approach Trump? That’s important. Manafort’s biggest clients have been Philippine dictator Ferdinand Marcos and Yanukovych… both deposed in popular uprisings. Exactly what does that tell you about Donald Trump?

What has surfaced now is the “black ledger.” Basically a book that has about 400 pages of scribbled entries that are combined from books once kept at the Party of Regions headquarters in Kiev. In that headquarters were two safes that were stuffed with $100 bills, said Taras V. Chornovil, a former party leader who was also a recipient of the money at times. He said in an interview that he had once received $10,000 in a “wad of cash” for a trip to Europe.

“This was our cash,” he said, adding that he had left the party in part over concerns about off-the-books activity. “They had it on the table, stacks of money, and they had lists of who to pay.”

Manafort’s name appeared 22 times in those documents over a five year period. He allegedly received $12.7 million in payments. Since the entries are pretty much chicken scratch, there is no way to tie them to a bank. He covered his tracks very well. There’s also no way to know what he did to earn that money. Not yet anyway. These accounting records just surfaced this year. Bad timing for Manafort.

The National Anti-Corruption Bureau, whose government funding is mandated under American and European Union aid programs and which has an evidence-sharing agreement with the FBI, has investigatory powers, but cannot indict suspects. No documents have been sent to prosecutors on Manafort, so he’s not part of a criminal case just yet. Make no mistake… this is corruption and that money is dirty.

Manafort also benefited and profited from business deals and connections through political consulting. One of those involved a network of offshore companies that government investigators and independent journalists in the Ukraine have said was used to launder public money and assets purportedly stolen by cronies of the government. These shell companies had owners who were shielded by the secrecy laws of the offshore jurisdictions where they were registered, including the British Virgin Islands, Belize and the Seychelles.

Manafort is tied to a now defunct investment fund called Pericles Emerging Markets. He started the fund with several partners back in 2007. Here’s the kicker. The major backer was Deripaska, a Russian mogul who has supposed ties to organized crime… the Russian mob. See where this is going?

Deripaska agreed to commit as much as $100 million to Pericles, so it could buy assets in the Ukraine and Eastern Europe, including a regional cable television and communications company called Black Sea Cable. But corporate records and court filings show that it was hardly a straightforward transaction. The Black Sea Cable assets were controlled by offshore companies that led back to the Yanukovych network, including, at various times, Milltown Corporate Services and two other companies well known to law enforcement officials, Monohold A.G. and Intrahold A.G.

Mr. Deripaska would later say he invested $18.9 million in Pericles in 2008 to complete the acquisition of Black Sea Cable. But the planned purchase — including the question of who ended up with the Black Sea assets — has since become the subject of a dispute between Mr. Deripaska and Mr. Manafort.

In 2014, Mr. Deripaska filed a legal action in a Cayman Islands court seeking to recover his investment in Pericles, which is now defunct. He also said he had paid about $7.3 million in management fees to the fund over two years. Mr. Deripaska did not respond to requests for comment.

Mr. Manafort’s lawyer, Mr. Hibey, disputed the account of the Black Sea Cable deal contained in Mr. Deripaska’s Cayman filings, and said the Russian oligarch had overseen details of the final transaction involving the acquisition. He denied that Mr. Manafort had received management fees from Pericles during its operation, but said that one of Mr. Manafort’s partners, Rick Gates, who is also working on the Trump campaign, had received a “nominal” sum.

Manafort has not dissolved his company in the Ukraine and his aids have been there this year. Does that sound like he is not involved with the Russians anymore? Nyet.

There is far too much Russian influence around Donald Trump and Paul Manafort is the most prominent one and closest to him. His actions speak of a close relationship with Russian interests no matter what they claim. Does it matter if Manafort took dirty money from the Russians? Hell yeah, it does. And does it matter who Trump surrounds himself with? Even more so.