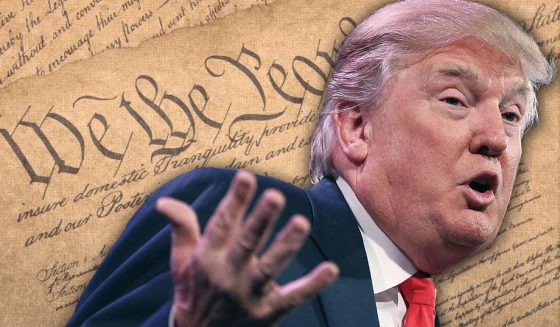 I believe that each of us has a right to support our chosen candidate and that includes Donald Trump. I do not hold that against someone once they have made that decision, for any of a myriad of reasons. However, I do hold it against those that go out of their way to attack and savage patriotic conservatives because they will not kneel at the altar of Trump. Such is the poison written by Edmund Kozak on Laura Ingraham’s website entitled: “Alt-Right vs. Conservative Inc.”

I have been a Ted Cruz supporter from the beginning. Even though he is no longer in this race, I still support him as the Constitutional Conservative we have waited for. I most likely will write him in when I vote. That is not a vote for Hillary Clinton. It is me voting my conscience, standing by my principles and refusing to vote for one evil to stop another. Two evils that I view as two sides of the same coin and equally repugnant.

I was told when I didn’t fall in line with Trump that my vote didn’t matter and wasn’t wanted. Now I’m told that if I don’t vote for Trump, it will be my fault that he loses and Hillary wins. That doesn’t sway me in the least. In my world, right is right and wrong is wrong. I won’t vote for a Fascist to stop a Marxist, especially when the two are interchangeable.

Kozak has written a piece that paints Constitutional Conservatives as the Establishment GOP Elite. Nothing could be further from the truth and he knows it:

In truth, it is the Establishment GOP elite — who profit in both power and dollars by pushing a globalist economic agenda — who have strayed farthest from the tenants of traditional conservatism. These elites have actually created a for-profit structure. This “Conservative Inc.” dupes the base of the party into handing more power and campaign cash to an Establishment network that operates primarily against their interests.

Constitutional Conservatives and patriots such as Ted Cruz and Ben Shapiro in no way support a globalist economic agenda. They are for free trade… perhaps that is something that seems foreign to the likes of Kozak. We are not protectionist as Trump is and there’s the rub. True conservatives believe the market should decide the economic outcome. Those that are true globalists are on the left and this is his attempt to smear conservatives and lump them in with not only the GOP Elite, but leftists as well, essentially branding them the enemy. You see, he has to do this as true conservatism and constitutionalism is a danger to the likes of Trump. We believe in our God-given rights and freedoms and we want the Constitution to be followed, just as we want the rule of law implemented. Nice try on branding, but fail.

The next part I am quoting is simply insane:

The Constitution worship of those like Shapiro and Sen. Ted Cruz reveals that the mainstream conservative movement has largely forgotten the principle of imperfectability.

The Constitution alone cannot guarantee some sort of political utopia. Man is fallen — a city on a shining hill cannot be guaranteed by a mere piece of paper. The fact that within a decade of the documents’ adoption the government was already trying to subvert it should be a clear indication of that reality.

None of us has ever claimed the Constitution was perfect. No document or man is. But the Founding Fathers made sure that could be rectified with Amendments. Whereas it does not create a political utopia, when the Constitution was adhered to, our country thrived and prospered. There have been those trying to subvert the Constitution from the beginning and who still are. Again, I was told that when I would not follow Trump, that Constitutional Conservatism was dead and the document was outdated. I was told that I would regret not following the man and it would destroy me. It hasn’t yet, but if it did, then so be it. My principles and freedom mean more to me than any strongman or his followers who threaten me. Kozak’s argument here is specious and utterly flawed. It is the justifications of someone laying the groundwork for a dictatorship.

It is not Constitutional Conservatives and the likes of Ted Cruz and Ben Shapiro who have lost their way. They aren’t lost period. It is the Alt-Right who has veered off to follow a leader who does not believe in the Constitution or freedom. A man who will rule with an iron grip, an enemies list and who will slam the lid down on this nation so hard it will shatter.

I believe that Donald Trump is a very dangerous man. And some of those around him may be just as dangerous or more so. Steve Bannon comes to mind. Bannon has claimed that he is a Leninist.

This is the definition of Leninism:

Leninism is the political theory for the democratic organisation of a revolutionary vanguard party and the achievement of a dictatorship of the proletariat, as political prelude to the establishment of socialism. Developed by and named for the Russian revolutionary Lenin, Leninism comprises socialist political and economic theories, developed from Marxism, and Lenin’s interpretations of Marxist theories, for practical application to the socio-political conditions of the agrarian Russian Empire of the early 20th century.

Ronald Radosh, a former communist turned conservative, had this to say about Steve Bannon:

Why has the Trump campaign taken as its new head a self-described Leninist?

I met Steve Bannon—the executive director of Breitbart.com who’s now become the chief executive of the Trump campaign, replacing the newly resigned Paul Manafort—at a book party held in his Capitol Hill townhouse in early 2014. We were standing next to a picture of his daughter, a West Point graduate, who at the time was a lieutenant in the 101 Airborne Division serving in Iraq. The picture was notable because she was sitting on what was once Saddam Hussein’s gold throne with a machine gun on her lap. “I’m very proud of her,” Bannon said.

Then we had a long talk about his approach to politics. He never called himself a “populist” or an “American nationalist,” as so many think of him today. “I’m a Leninist,” Bannon proudly proclaimed.

Shocked, I asked him what he meant.

“Lenin,” he answered, “wanted to destroy the state, and that’s my goal too. I want to bring everything crashing down, and destroy all of today’s establishment.” Bannon was employing Lenin’s strategy for Tea Party populist goals. He included in that group the Republican and Democratic Parties, as well as the traditional conservative press.

This is the man who now basically has Trump’s ear and this is what he proclaims and supports. That’s chaos and it is just moonbat crazy. Add that to Russian influence, shady dealings, vile attacks and unconstitutional leanings and you have the makings of a South-American style strongman.

Nationalist populism is not the answer… it is a death knell for this country, just as liberal Marxism is. The only thing that will save the Republic and our country is to return to what made us great in the first place: faith in God, the Constitution, founding principles, limited government and our God-given rights. No one man can save us or solve this and to turn to one is suicide.

The Founding Fathers were brilliant men who sacrificed everything for this country and to ensure our freedoms. The Constitution is a foundational document that has served us well for 240 years. These people keep trying to fix something that is not broken to serve their own political agenda. We don’t worship the Constitution… we revere it and believe that it is the answer to righting this country. The answer certainly isn’t a strongman, nor is it a federal leviathan government.

I’m proud to be a Constitutional Conservative and if one day that has me labeled as a traitor and tried for being a patriot, I will make sure they have enough to convict me.