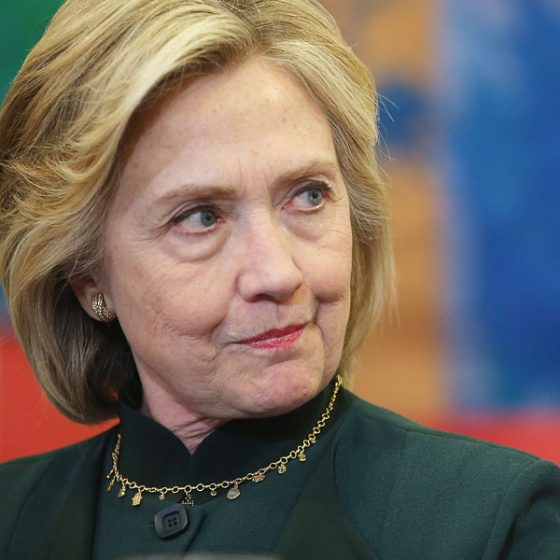 Hillary Clinton is still considered by many people to be a fundamentally dishonest candidate. A recent NBC poll shows that only 11 percent of surveyed voters believe she is “honest and trustworthy.” However, contrary to the mainstream media’s attempt to save her reputation, and her campaign’s complaints about a double standard, Mrs. Clinton has done most of the damage to her reputation herself through her penchant for lying.

This week adds more Clinton lies to the many that have already been exposed. As Accuracy in Media chairman Don Irvine notes, former Secretary of State Colin Powell has taken exception to the Clinton campaign’s decision to “pin” responsibility for Mrs. Clinton’s private email server on him. According to The New York Times, the notes turned over to Congress last week by the FBI about their interview with Mrs. Clinton early last month, said that Mrs. Clinton apparently told the FBI, as she has stated publicly, that Powell had suggested that she use a personal email account.

Powell said, “The truth is, she was using [the private email server] for a year before I sent her a memo telling her what I did,” reports the Washington Examiner. MSNBC’s Joe Scarborough detailed a number of differences between Powell’s and Clinton’s email use, including that Powell didn’t use a private email server and did use a State Department office desktop for classified communications.

The 302s, or FBI summaries, of Mrs. Clinton’s interview with that agency are heavily redacted, according to House Committee on Oversight and Government Reform Chairman Jason Chaffetz (R-UT). He said on Fox News’ Outnumbered on August 22 that he was surprised that the FBI redacted what they did, and was concerned that there wasn’t more detail in the summary.

Records of the FBI interview could contain evidence of contradictions between Mrs. Clinton’s congressional testimony and her statements to the FBI. Yet Chaffetz, asking for a second classified copy, received two different sets of notes from the Bureau, but said they were inconsistent with each other.

Apparent contradictions between the FBI findings and Mrs. Clinton’s assertions extend beyond blaming Powell for her unsecured server. They also include her claims that she sent nothing that was classified at the time through that server, and that her staff “went through every single email” when deciding to delete personal emails.

“Clinton deleted more emails than she turned over,” reports Chris Cillizza for The Washington Post. “Her team never actually read all of the emails, skimming subject lines instead…The essence of Clinton’s argument regarding this email-sorting process was: Trust me.”

But Hillary Clinton has demonstrated time and again that she can’t be trusted. The Post is reporting that the FBI found approximately 15,000 previously undisclosed emails and documents, and “a federal judge on Monday pressed the State Department to begin releasing emails sooner than mid-October as it planned.”

However, Maryland Senator Ben Cardin (D) asserts that the concern over Hillary Clinton’s emails is a “partisan witch hunt,” and he falsely claimed on Fox News Sunday that “Three former secretaries of state used private e-mail servers.” In reality, Mrs. Clinton is the only secretary of state to have established a private, homebrew server. That is what she used for all of her government business.

EmailGate continues to be an enduring scandal that calls Mrs. Clinton’s integrity and judgment into question. The real scandal, as we’ve pointed out before, is not about what device she used for her emails. It is a national security scandal. Hillary regularly sent and received classified information, including Top Secret information, on an unsecured server, putting our nation’s security at risk, as well as potentially exposing sources and methods used by U.S. intelligence to our enemies.

Also enduring is the scandal of the apparent quid pro quo arrangements made between Clinton and her staff and Clinton Foundation donors while she was serving as secretary of state.

The Clintons are trying to control the damage from allegations of pay-for-play. Former President Bill Clinton recently announced that this September marks the last Clinton Global Initiative annual conference, and that if Mrs. Clinton wins the presidency the Clinton Foundation will only accept money from U.S. citizens and charities. The Washington Post reports that these restrictions would not apply to the Clinton Health Access Initiative.

“But my point is that there is all this scrutiny because Hillary Clinton has been transparent,” argued Clinton campaign manager Robby Mook on CNN. “…So, as I said, the foundation is taking unprecedented steps here.”

If the Clintons wanted to be transparent, they would stop the Clinton Foundation from taking foreign donations immediately. Instead, this arrangement serves as a blatant call for foreign governments and corporations to buy access and favors now by paying off the Clintons before the election takes place. After all, each donation is an investment in a possible Clinton presidency.

Some of the press agree. The Boston Globe published an editorial suggesting that the Clinton Foundation should stop receiving any donations now, and should close its doors if Hillary becomes president. Similarly, Slate’s Josh Voorhees has issued cutting words criticizing the Clintons’ current plan: “While the Clintons are now promising to build that firewall for themselves if they win the White House, this announcement does nothing to prevent foreign entities from splashing the foundation pot during the final months of the general election,” he writes. “The Clintons’ cozy relationship with their foundation’s global patrons was a problem when Hillary was secretary of state and it is a problem now that she’s running for president.”

But fear not for the Clinton Foundation. According to the results of a Washington Post investigation reported in June of last year, the foundation had already raised $2 billion since Bill left office in 2001, and the Clintons have personally collected a combined average of $10 million a year for the last 15 years in speaker fees. According to an investigation by The Federalist website, only about 10 percent of the foundation’s money went to charitable grants in 2013.

Hillary’s ethical problem is that she can’t stop lying about things that might make her appear to be a weak or dishonest candidate, one compromised by money in politics. The purpose of the lying is to keep her from being indicted, and convince voters that she can make it to the White House, where she figures she could make this all go away. While the mainstream media continue to pull out all the stops to ensure the viability of her presidential candidacy, the Clinton Foundation quid pro quo has proven to be too bitter a pill to swallow.