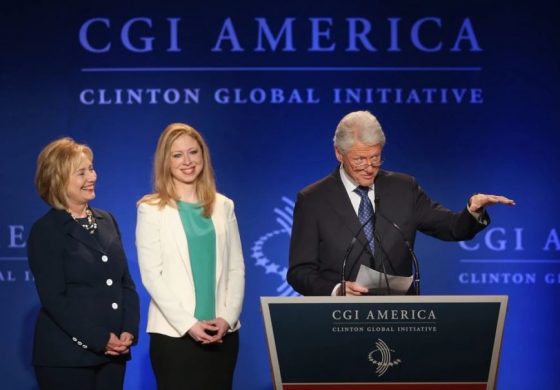 The Clinton family’s history of pay-for-play while Hillary was secretary of state is blatant, willful, and indisputable. The latest chapter in the Clintons’ quid pro quo scheme was brought to light by the Associated Press. But many in the media have quickly moved past this story, even insisting that the AP was cherry-picking their data to make Mrs. Clinton look bad. Some news organizations, such as CNN, reported the latest revelations as being pounced on by the Trump campaign—rather than the product of excellent investigative reporting by the AP, a solid, member-in-good-standing of the liberal media establishment that apparently stepped out of line, just a little bit.

The media also have dwelled on, and repeatedly mentioned, the story that Trump might be waffling on his immigration policy. Where is the similar passion given to a legitimate story of Clinton corruption?

“Clinton critics have not proven that Clinton or the State Department materially granted any favors to possible donors, but the report and other emerging information is reigniting the firestorm over the foundation,” writes Theodore Schleifer in, “Trump, RNC Seize on new report to attack Clinton Foundation” for CNN. “Trump’s campaign and Republicans have sought to cast suspicion over Clinton’s tenure as secretary of state and argued that foreign donors’ contributions to the foundation created inevitable conflict-of-interest questions,” he continues.

Other media organizations, such as US News & World Report, did stories that limited their reporting largely to repeating the Clinton campaign’s defensive arguments. This is all part of the mainstream media’s plan to sow division by, essentially, getting viewers to judge new information by asking themselves whether they are on the side of Trump or Clinton. But the merits of the AP story outweigh Trump’s actions; it serves as one more indisputable example of how the Clintons put a price tag on access to and favors from the State Department.

“More than half the people outside the government who met with Hillary Clinton while she was secretary of state gave money—either personally or through companies or groups—to the Clinton Foundation,” opens the AP article. “At least 85 of 154 people from private interests who met or had phone conversations scheduled with Clinton while she led the State Department donated to her family charity or pledged commitments to its international programs, according to a review of State Department calendars released so far to The Associated Press.”

The Washington Examiner also documented back in 2014 the money flowing to Bill Clinton and the Clinton Foundation while his wife was secretary of state.

“According to documents obtained by Judicial Watch and released Wednesday in an ongoing Freedom of Information Act case, State Department officials charged with reviewing Bill Clinton’s proposed speeches did not object to a single one,” reported the Examiner in 2014. The Obama administration’s State Department simply rubber-stamped them.

The AP story “just plain looks bad,” writes Chris Cillizza for The Washington Post. “Really bad.” He writes that, as with Mrs. Clinton’s deleted emails, the Clinton campaign response boils down to “trust us”—even though polling shows that Mrs. Clinton isn’t considered trustworthy at all.

CNN’s Anderson Cooper deserves credit for some tough questions that he asked of Hillary on Wednesday evening. He asked her to explain why the foundation would stop taking foreign donations if she becomes president, but didn’t stop while she was secretary of state. She dodged the question, saying that if she becomes president there would be “unique circumstances,” and when pressed how that was different—why there weren’t “unique circumstances” when she was secretary of state—she answered, “I know there’s a lot of smoke and there’s no fire.” But she never explained the difference.

When Cooper cited former Secretary of State Colin Powell’s repudiation of Mrs. Clinton’s claim that Powell had advised her at the start of her term as secretary to use a personal email account, she again didn’t answer the question, but instead said, “I’m not going to relitigate in public my private conversations with him.” She then added, “I want people to know that the decision to have a single e-mail account was mine. I take responsibility for it. I’ve apologized for it. I would certainly do differently if I could.” But that’s not the issue. The issue was knowingly sending and receiving classified—including Top Secret—information on her private, unsecured server. If she apologized for that, she would have to face a jury of her peers, so she’ll just keep lying instead.

The reason Mrs. Clinton is considered untrustworthy is, in part, because of her foundation’s shady dealings and quid pro quo. Another reason is that she just can’t stop lying about her emails, or Benghazi, or anything that might embarrass her as a candidate.

“And while nothing in the AP story is proof of any wrongdoing, it is proof of bad judgment,” writes Cillizza. The Clintons’ blatant pay-for-play scheme may have no smoking gun. However, many people have been jailed for less than what has been described here.

But let’s not forget the Laureate Education deal, where, as we’ve cited, “More than $16 million was paid to Bill Clinton through a shell corporation after which more than $55 million American taxpayer dollars flowed out of Hillary Clinton’s State Department to a non-profit run by Laureate CEO Douglas Becker.”

“Bill Clinton resigned from his position as ‘honorary chancellor’ of Laureate in April of 2015, right after the disclosure of the information from Clinton Cash was made public,” we wrote, and asked why Trump University was garnering so much more coverage than the Laureate Education scandal.

While the Clinton campaign and their allies in the media maintain that the AP cherry-picked its information, examples of quid pro quo by the Clintons extend to Russia’sSkolkovo project and the Uranium One deal, to name two more. The AP has pushed backon its critics, pointing out that they stand by their story, and that this was reported by the same team of investigative reporters who broke the story that led to Trump campaign manager Paul Manafort’s departure.

“The idea that this many people on the private citizen side as opposed to all officials were connected to the foundation and meeting with her at the State Department smells bad,”said Chris Cuomo on CNN. “You say nefarious. I’m not saying it’s illegal. I’m not saying it’s a felony. That shouldn’t be the bar for wrongdoing either. It seems wrong and inappropriate. Isn’t that enough to draw criticism?”

The relationship between the Clinton Foundation and her State Department is proving to be a significant problem for Hillary Clinton—but it will only become and stay an election issue if the media allow it to do so. Questions about Hillary’s corruption will only take center stage if the news media stop disingenuously casting real investigative reporting as part of Trump’s reaction rather than discussing the facts uncovered.