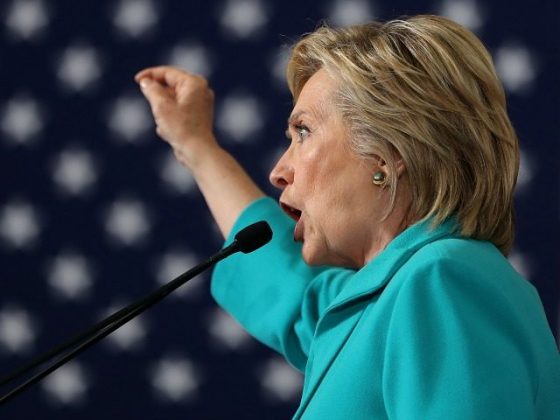 The credibility of our government has been marginalized, and increasingly so for decades. The agenda-driven politicization of departments and agencies – government entities that are supposed to serve the people – has facilitated an all-encompassing bureaucracy loyal to elitist politicians over the American people. This corrupt, special interest-serving politicization has exploded in the almost eight-years of the Obama Administration.

In an unbelievable explanation covered by the Washington Examiner, Hillary Clinton testified under sworn deposition to FBI agents that she believed the classified “C” markings on emails recovered from her private emails were there as a way to alphabetically order paragraphs. This information comes from an 11-page summary of the deposition, alongside 58 pages of notes from the FBI investigation into her illegal use of a private email server and email accounts.

“When asked what the parenthetical ‘C’ meant before a paragraph…Clinton stated she did not know and could only speculate it was referencing paragraphs marked in alphabetical order,” the FBI cited from notes created taken during its interview with her.

The interviewing agent’s notes stated that Clinton swore she had a “limited understanding” of the document classification process; of how and why certain documents are deemed classified. They also revealed that Clinton “couldn’t recall” ever being trained on how to handle sensitive material.

The new information also evidenced that Clinton testified to FBI investigators approximately three dozen times that she “couldn’t recall” specific details or events related to her use and establishment of her private email and server.

Clinton’s excuse for several of her lapses in memory was that the events in question occurred directly her head injury, which left the Democrat nominee with a blood clot on the brain and a concussion.

So, let’s take a brief recounting of Hillary Clinton’s political career to see if it is even possible for her to be so naïve about the document classification process and for her not to have any functional knowledge of how to handle classified and sensitive information.

Hillary Clinton served as a staff lawyer on the House Judicial Committee investigating Watergate during her youthful years in Washington. This position mandated that she have access to audio files that containing classified information; information recorded inside the Oval Office. Are we to believe she wasn’t counseled on how to handle those documents?

Hillary Clinton was also First Lady for eight long, hard years. In that station she would have had to have attained a top secret status just for her ability to enter the Oval Office with regularity. Are we to believe she wasn’t counseled on how to manage information she may or may not have had access to emanating from the President or the Oval Office?

Clinton was a US Senator from New York who sat on the Armed Services Committee and the Subcommittee on Emerging Threats & Capabilities. These committee assignments required Clinton receive at least “top secret” clearance for the military information to which she had access. Are we to believe that during the whole of the time she was on these committees she never once was counseled on how to handle classified information?

And as Secretary of States – a position fourth in line to the presidency, and part of the inner-circle cabinet and structural hierarchy of the President of the United States – she was required to handle all classifications of sensitive information materials, including “Special Access Program” material, the highest and most sensitive level of information our government keeps. Are we to believe that she was afforded this access without anyone – anyone – covering their asses enough to have counseled her on how to safeguard this information?

Clinton’s answers the FBI investigators; her excuses; her attempts at establishing plausible deniability, are so far from the realm of believability they are beyond ludicrous. To believe her narrative is to exist as a human being incapable of even the most rudimentary function.

To put it bluntly: To believe Clinton’s testimony would be to be on the intellectual level of a mentally challenged squirrel, and that is being unkind to the squirrel.

It is beyond obvious that Mrs. Clinton has perjured herself in interviews with Federal Agents, just like her impeached husband did. As we all know, that – in and of itself – is a crime punishable by time in a federal prison and a hefty fine.

It would require the willing suspension of disbelief to accept that over the many years Clinton has existed in Washington she wouldn’t understand how to recognize and/or handle classified information. For that to be true there would be a trail of unauthorized access to sensitive materials that would rival the Oregon Trail and the Trail of Tears combined.

Given how the Clintons are dojo masters at covering their tracks and establishing plausible deniability – and given they were aware enough to BleachBit destroy the emails they really didn’t want anyone to see, it is impossible to accept her story that she “didn’t know” or was “unaware.”

All that understood, perhaps Friday’s FBI document dump isn’t what it appears. Maybe it is based on either a guilt streak or an attempt to make things right in spite of a corrupt Justice Department by FBI Director James Comey, perhaps both. Perhaps that was the plan all along. Would it be ethical? No, it wouldn’t. But when you are battling unethical forces (read: The Clintons and the Washington Progressive machine) that will lie, cheat, steal and, perhaps, even kill, to achieve their goals, sometimes you have to get a little dirty.