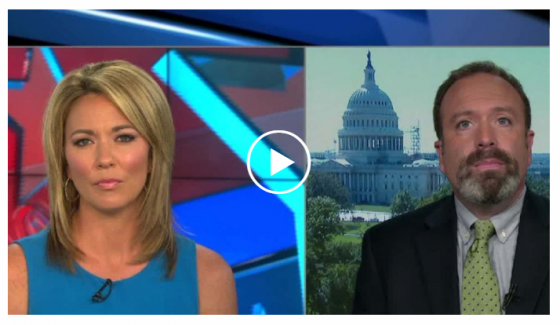 One of my favorite Andy Griffith episodes shows Goober growing a beard to try to look smart. Picking up an apple, he declares, “One time you was a seed.” Unfortunately, the extreme makeover didn’t work for Dana Milbank of The Washington Post during an appearance on the Clinton News Network (CNN). His new beard didn’t disguise the loony opinions that have become his hallmark.

The occasion was an appearance with CNN’s Brooke Baldwin to confirm that Hillary was right in saying that half of Donald J. Trump’s supporters were deplorables. “Come back any time,” Baldwin concluded. The appearance wouldn’t be worth commenting on, except for the fact that Milbank tried to look and sound like an intellectual. It was really funny.

At a time when Mrs. Clinton has attacked half of all Trump supporters as “deplorable,” Milbank was brought on to somehow confirm this. He had no problem with the rise of black hate groups like Black Lives Matter or President Obama’s racially divisive rhetoric. Instead, he saw white people (of which he is one) as the problem.

“There’s been a huge jump in the amount of racial stereotypes expressed by white people in America, people who will say that black Americans are less intelligent or lazier than white Americans,” he declared. “And it’s really quite shocking, something like 62 percent of white voters have these sorts of sentiments, and by better than 2-1 they vote Republican.”

He added that since 2008, “there’s been sort of a 20 percentage point jump in the number of white Americans expressing these racist stereotypes and a lot of that has to do with backlash against the first African-American president.”

Assuming that there is rising racial tension in this country, is it not reasonable to conclude that spectacles like overpaid black athletes protesting the National Anthem have played a role? What about the role played by the media in promoting Black Lives Matter, a group that honors a black cop-killer named Assata Shakur, who killed a white New Jersey State Trooper?

Neither Baldwin nor Milbank mentioned that the nation’s first black president has endorsed not only the ugly protests in the NFL (which included socks depicting policemen as pigs), but the anti-white racism of Black Lives Matter.

Obama has also highlighted the killings of black people in a campaign carried forward by his own Department of Justice against local police forces. Yet, Heather McDonald of the Manhattan Institute notes that, as of July 9 of this year, whites were 54 percent of the 440 police shooting victims, compared to 28 percent of them black. Last year whites made up 50 percent of the 987 fatal police shootings, and blacks, 26 percent. And, she adds, “Blacks commit homicide at nearly eight times the rate of whites and Hispanics combined.”

According to Milbank, rising racial hostility is absolutely not Obama’s fault. White people are to blame. He is a modern-day Goober.

Looking at the violence in places like Chicago, it may be the case that many white people are no longer willing to accept that they are to blame for black people killing themselves and others. Perhaps their opinions of black people have become more critical. They wonder why Obama doesn’t seem to care for his own people. They wonder why black politicians in the Democratic Party are so slow to condemn this violence and do something about it.

Consider the video of a 71-year-old man in Chicago who was recently shot while watering his lawn by a young black thug who wanted his money. Chicago Tribune columnist John Kassreports, “The shooters, these feral young men, aren’t an accident. They are the direct product of the Democratic welfare state that helped destroy families. The government became the father, the fathers became irrelevant or were driven off, and black families that had withstood decades of Jim Crow segregation began to collapse.”

Kass is white, but can anybody seriously doubt the truth of his observation? Where are the black “leaders” sounding the alarm?

CNN posted the video, with the description, “A 71-year-old man was shot and robbed by two men while watering his lawn in a southwest Chicago neighborhood.” The “two men” were black.

Yet talking and bearded heads like Milbank are worried about theoretical white racism, as reflected in surveys about stereotypes.

Milbank is a dishonest but familiar face, with or without a beard, to conservative media figures holding news conferences to announce the results of their investigative reporting about Obama and Hillary that Milbank and his colleagues refuse to do. He has showed up at various events to see what conservatives may have to say about various left-wing scandals. I have personally seen him at AIM conferences on Benghazi and my own conferences on Obama’s ties to the black racist communist Frank Marshall Davis. Usually, Milbank writes his stories during the events, when he thinks he has discovered something he can twist or distort, in order to try to make the conservatives look crazy or foolish.

In the Andy Griffith episode, Goober finally shaves off the beard, after people start fleeing from his pseudo-intellectual rhetoric. He realizes that he has been acting stupid when he has been trying to sound smart.

The Brooke Baldwin-Dana Milbank show is a modern version of that timeless classic. These people don’t realize how stupid they look and sound. They are modern-day Goobers who can only succeed in driving people away from CNN to alternative media.

Yes, we appreciate it, Mr. Milbank. Now, go shave off the beard.