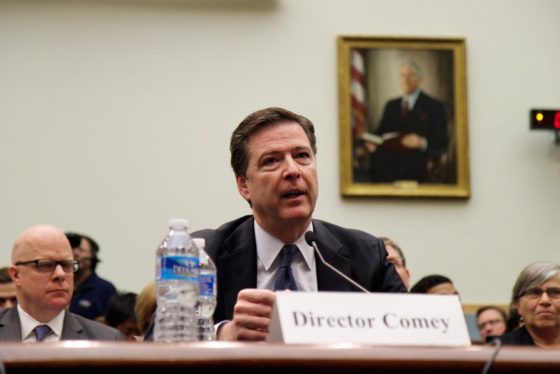 The more that details about the FBI’s investigation into Hillary Clinton’s email practices come to light, the more their efforts appear to have been a sham designed to exonerate her of wrongdoing from the very beginning. As we wrote, the Department of Justice’s (DOJ) failure to indict Hillary, based on the recommendation of FBI Director James Comey, has moved the United States closer to banana republic status.

The Clinton family’s ongoing corruption and Hillary Clinton’s pay-to-play as secretary of state have also created a precedent which could encourage other politicians to enrich themselves at the expense of the integrity of their office. The FBI’s light touch also has created a double standard on national security, where high-profile figures such as Mrs. Clinton walk free while others lose their security clearance or are fined or jailed.

Yet some on the left are unhappy with Comey’s investigation because of the comments he made publicly characterizing Mrs. Clinton as “extremely careless” with classified information. “What Comey should have done…was handle the Clinton probe like any other routine inquiry: provide confidential recommendations to prosecutors, release a strictly factual statement noting that the investigation would be closed, and resist external pressures to inappropriately air the FBI’s findings outside a court of law,” argues Riley Roberts, former speechwriter for former Attorney General Eric Holder, in Politico Magazine.

Arguably, Clinton’s status as a presidential candidate under FBI investigation may have called for some public justification of the FBI’s decision. However, despite Comey’s open criticisms, the fact remains that he decided to recommend no indictment for Hillary Clinton. There will be no accountability for Clinton’s many lies about classified information on her private email server or the way she jeopardized national security as secretary of state.

Upon further review, it appears that Mr. Comey’s investigation was highly unusual, given the five immunity agreements that were handed out. According to Paul Sperry, writing for the New York Post, not only was Platte River Networks’ Paul Combetta granted immunity, the DOJ upheld this immunity despite the fact that he had lied to the investigators during an interview.

“Instead of asking Attorney General Loretta Lynch to revoke his immunity deal and squeezing him, Comey let [Combetta] go because he was a ‘low-level guy,’ he testified at the House hearing. It’s yet another action by Comey,” wrote Sperry, “that has left former prosecutors shaking their heads.”

At that September 28 House Judiciary Committee hearing featuring Director Comey as a witness, Representative Jim Jordan (R-OH) accused Combetta of “trying to cover-up the cover-up” by first using Reddit to solicit information on how to strip email address information and then trying to delete his posts. “The same guy later took Bleachbit and did delete emails,” continued Rep. Jordan.

But Comey insisted that the immunity agreement was necessary to ensure that the FBI got the facts.

“There’s no doubt Combetta was involved in deleting emails,” said Comey. “He had the ‘O-sh-t’ moment, as he told us, and that’s why it was very important for us to interview this guy to find out who told you to do that, why did you do that.”

According to Andy McCarthy, writing for National Review, Secretary Clinton’s former chief of staff Cheryl Mills and Clinton aide Heather Samuelson also received immunity agreements meant to ensure that they gave the FBI access to their laptops. However, the FBI could have just subpoenaed the computers or obtained a search warrant instead.

Sperry makes it clear that Mills was lying to investigators, as well. She, apparently, “told agents she had no idea Clinton maintained a private email server,” he writes. However, the email record demonstrates that she emailed the server administrator to ask about the status of that very server.

McCarthy calls the granting of these immunity agreements “very strange” behavior by the FBI. “The Justice Department could have required the production of the computer by simply issuing a grand jury subpoena,” he writes. “And had there been any concern that Mills would not cooperate, would destroy the computer, or would ‘misplace’ it (as Team Clinton claims to have misplaced so many Hillary devices), investigators could have applied for a search warrant and seized the computer.”

To add insult to injury, the FBI allowed Samuelson and Mills to sit in on Hillary Clinton’s interview with the bureau.

Former U.S. attorney Solomon Wisenberg, who conducted the grand jury questioning of President Bill Clinton, argues that the FBI should never have allowed Cheryl Mills to sit in on Mrs. Clinton’s interview. “Competent prosecutors do not allow a key witness to participate as an attorney in an FBI interview of the main subject,” he writes. “It just isn’t done.” He writes that “if Clinton insisted on Mills’s attendance, the interview would be conducted under the auspices of the federal grand jury.”

In addition, it was inappropriate that the only interview of such a high profile subject wasn’t recorded. It is preposterous that nine people were allowed to sit in during the interview. Comey acknowledged that this was unusual, but he said it was not unprecedented, though he didn’t cite any precedents.

The FBI should have convened a grand jury instead of just conducting light touch interviews, argued former U.S. attorney Joe DiGenova, speaking at a recent Judicial Watch event. “Now, it is evident to me…what Mr. Comey should have done at the beginning of this investigation was empanel a grand jury,” said DiGenova. “When you want to investigate crimes involving national security information, classified information, you don’t do interviews. You issue subpoenas to witnesses, third parties for documents. You make people come into court and fight them in front of a federal judge…”

2 thoughts on “Was the Fix in on FBI Investigation of Hillary Clinton’s Emails?”