Yesterday, James O’Keefe exposed how the Democrats and Hillary Clinton are using a practice called “bird-dogging” to infiltrate Trump rallies and cause violence and chaos to make him look bad. It’s not a new tactic for these people, but it is one they very sneakily implement just as they did against the Tea Party.

In this second investigative video, Project Veritas sends an undercover reporter in pretending to be a Democratic Party donor brainstorming an elaborate voter fraud scheme to fraudulently register people to vote in various states using the lax voter registration policies currently in place. Robert Creamer also stars in this video with his colleague Scott Foval, who was summarily fired yesterday from Americans United for Change because of O’Keefe’s investigative work. Also of note, Foval worked for People for the American Way. I’m sure you will be shocked to know they are primarily funded by George Soros. 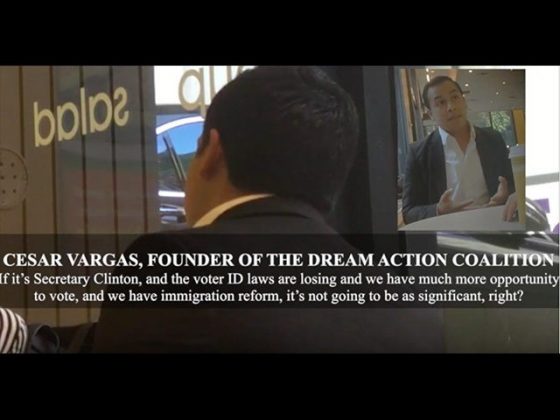 The second video in James O’Keefe’s Project Veritas investigation of the 2016 election reveals what O’Keefe describes as “Democratic Party operatives tell[ing] us how to successfully commit voter fraud on a massive scale.”

Part one in O’Keefe’s investigation unraveled what appears to be an elaborate web of Democrat-trained provocateurs who have been instigating violence at Republican events nationwide throughout the 2016 election cycle, including at several Donald Trump rallies, using a tactic they called “bird-dogging.” O’Keefe’s team has also uncovered evidence that Democratic consultants may have been relaying messages to and from Hillary Clinton’s presidential campaign and super PACs funded by wealthy donors in a system one consultant called “the Pony Express.” Campaigns and Super PACs are not permitted by law to coordinate with each other.

In the preface to the second video, O’Keefe states that the first video “blew up on social media, but sources have told us that several large corporate media outlets are afraid to cover our discoveries for fear of future retribution from a Hillary Clinton administration. Truth is dangerous especially when it challenges power.”

Foval states his adoration for Creamer in the second video:

Bob Creamer is diabolical and I love him for it. I have learned so much from that man over the last twenty years, I can’t even tell you. And he calls me to be his firefighter a lot of the time, because there are people who in our movement will not do what it takes to get shit done. And I’m not that person. I’m the one they send when everything has gone to shit. And so he spends a lot of time on the phone with my boss asking me to go places that I don’t wish to go.

Well, if you call learning at the knee of a felon, committed communist and radical activist who envisioned Obamacare the kind of person you idolize, then you are pretty much the scum of the earth. In the second video you get to see Foval and the undercover reporter brainstorming over voter fraud, however O’Keefe notes that “Creamer hesitated to help our ‘donor’ pull off the voter fraud scheme that Foval crafted.” He must have smelled a trap because this is the kind of thing that is right up Creamer’s alley. Never one to give up what he thinks is a brilliant scheme, Foval then went to Cesar Vargas.

O’Keefe on Vargas: “Vargas is an interesting character. He is the co-founder of the Dream Action Coalition, a New York lawyer and is a dreamer himself. Born in Mexico, Vargas is an undocumented alien. He has known Bob Creamer for years.”

Now we get to hear what Vargas thinks of the whole plan:

Like I said, this is not gonna happen this election. So I think it’s about, for us, let’s see who the next president is. If it – if it’s Donald Trump, it even makes more sense. The issue will be more credible and it’ll give us more opportunity to jump in there. If it’s Secretary Clinton, and the voter ID laws are losing and we have much more opportunity to vote, and we have immigration reform, it’s not going to be as significant, right?

Our intrepid undercover guy tells Vargas that this is voter fraud. To which Vargas replies, “It’s civil disobedience.” Uh no… it’s illegal AND unethical. And if you think Vargas had a set on him, wait until you hear how Foval ends this clip: “We have to do a better job of making our people do what they’re supposed to do. Not asking them. Making them. Not expecting them and taking them for granted, but beating the shit out of them.”

O’Keefe has more videos on the way right on through the election. Should be interesting. Great work by Project Veritas as usual.

Also see: J. Christian Adams, the President and General Counsel of the Public Interest Legal Foundation, has filed a legal complaint to the Federal Election Commission against “Hillary for America, the Democratic National Committee, Democracy Partners, Americans United for Change, and other known and unknown individuals and groups.”