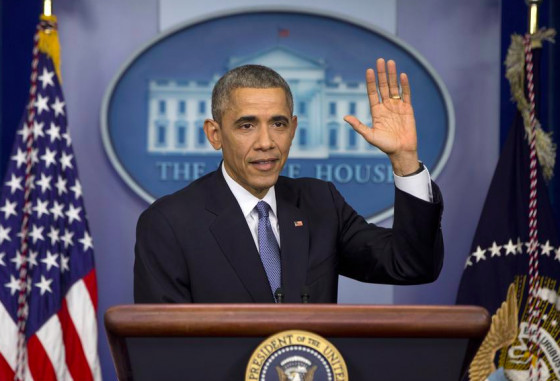 The election of Republican presidential nominee Donald Trump on November 8 was not only a rejection of Hillary Clinton, based on her trustworthiness and her legal and ethical problems, it was also clearly a repudiation of Democratic policymaking, with Trump promising to eliminate or revise a number of Barack Obama’s signature achievements. But, speaking to the press in his first press conference after the election, President Obama maintained that he is leaving the White House and America in as good a shape as possible.

“As I told my staff, we should be very proud that their work has already ensured that when we turn over the keys, the car’s in pretty good shape,” Obama told the press on November 14. He then pointed to the jobs market, poverty levels, health insurance, and curbing carbon emissions. “…[M]y goal is on January 21, America’s in the strongest position possible and hopefully there’s an opportunity for the next president to build on that,” he said.

The press asked Obama questions about Trump’s temperament, rather than calling out Obama’s narrative that America is somehow better off because of his leadership. This has been a problem throughout Obama’s eight years in office. Too many in the media dare not challenge Obama’s claims of great policy successes, or of being transparent, and having a scandal free administration. They want instead, it seems, to be liked by him, to keep their access to him, plus they generally support his agenda. So they rarely contradict him.

For example, we have long pointed out that citing the falling unemployment rate creates a falsely optimistic view of the economy. Gallup argues that real unemployment is at 9.5 percent, not the 4.9 percent that the Bureau of Labor Statistics recently reported. “For example, the U.S. Bureau of Labor Statistics (BLS) does not count a person who desires work as unemployed if he or she is not working and has stopped looking for work over the past four weeks,” states Gallup.

However, even the higher unemployment number downplays the seriousness of the current job situation. The U.S. labor participation rate is currently at its lowest levels since the 1970s. The labor participation rate is an estimate of the share of the population actively engaged in the labor market, either employed or currently looking for work. Nearly 15 million people have left the workforce since President Obama came to office in 2009, bringing the total up from about 80 million people to approximately 95 million. Those people are no longer counted when calculating the unemployment rate, rendering the 4.9 percent rate a very poor indicator of how the economy is doing.

“The incoming administration doesn’t have to put out a huge number of fires,” said Obama at the press conference, alluding to the economic crisis that he faced upon taking office. “And that’s a testament to the tremendous work that my team has done over the last eight years,” he said.

President Obama has repeatedly claimed that he has cut the deficit. During his 2016 State of the Union address, he claimed that his policies had cut “our deficits by almost three-quarters.” However, as the Center for Individual Freedom points out, Obama’s “worst legacy, one that remains grotesquely underreported by the ‘watchdog’ mainstream media” is “by far the worst deficit record in U.S. history.”

“Over an eight-year period, that amounts to an accumulated $2 trillion under [George W.] Bush, or an average of approximately $260 billion,” states CFIF. When campaigning for the presidency in 2008, Obama called it “unpatriotic” that Bush had taken the national debt from approximately $5 trillion to $9 trillion. Today our national debt is just under $20 trillion after eight years of Obama in the White House. Far from leaving the United States in good shape, Obama is leaving it in debt-ridden shambles.

Trump has promised to roll back one of Obama’s key legislative achievements—Obamacare—which Obama claims has made the “uninsured rate” the “lowest level on record.” But, as we have reported, having insurance with large deductibles and skyrocketing premiums has hardly equated to more Americans receiving care.

The press has systematically failed to ask key questions about policies that are meant to bolster Obama’s legacy, refusing to call attention to Obamacare’s faults or expose the unsigned Iran “deal” as an enormous hoax. So it is of little surprise that the mainstream media also allowed Obama to claim the mantle of “scandal-free.”

The press considered few, if any, of the major Obama scandals—the IRS targeting scandal, Benghazi, the Veterans Administration scandal, Fast & Furious, ransom cash sent to the Iranians—as real scandals. That is because the press has made excuse after excuse for Obama’s mismanagement or deliberate malfeasance, perennially ignoring and downplaying his scandals.

President Obama’s administration has also been the least transparent administration in history, fighting against Freedom of Information Act (FOIA) requests to keep government business secret, and systematically targeting journalists who print leaked information. Obama has gone after those compromising national security, unless the person misusing classified information is Hillary Clinton.

Obama’s claim that he is scandal free has been echoed by the token conservative at The New York Times, David Brooks, as well as Obama’s former senior advisor, David Axelrod. As I previously argued, “The question of presidential legacy, however, revolves not around a president’s demeanor but rather his policy successes and failures, as well as his character….These scandals, and the ensuing cover-ups, have stained Obama’s reputation less publicly than in previous administrations not because of their minor importance, but rather because a corrupt media is willing to overlook massive amounts of evidence of malfeasance to benefit their allies in the Democratic Party.”

The Christian Science Monitor disagreed with my—and others’—use of the word “corrupt” to describe the media.

The Islamic State (ISIS) has expanded from JV status, as Obama told the New Yorker in early 2014, to operating in more than two dozen countries. “Since declaring its caliphate in June 2014, the self-proclaimed Islamic State has conducted or inspired more than 140 terrorist attacks in 29 countries other than Iraq and Syria,” according to CNN, “where its carnage has taken a much deadlier toll. Those attacks have killed at least 2,043 people and injured thousands more.”

There are half a million people who have been killed in Syria, which Nick Kristof of The New York Times calls “Obama’s worst mistake.”

Another part of his legacy is that Obama has left the Democrat Party in disarray. The media were assuring us that Trump was about to take the Republican Party down with him, and that it was on the verge of extinction. But, in fact, Republicans now dominate at the combined state and federal level like never before in modern times. As a result, Democrats are on the verge of choosing Rep. Keith Ellison (MN), a radical left-winger who supports the Muslim Brotherhood-front group, the Council on American-Islamic Relations (CAIR), and who has been a harsh critic of America’s ally Israel, as the chairman of the Democratic National Committee. Is that the lesson that Democrats learned from this last election?