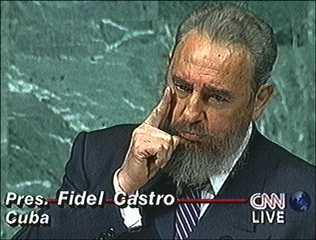 Donald J. Trump is labeled by CNN as a liar on a regular basis, while the dead communist tyrant Fidel Castro is lauded as a revolutionary hero. American reporters are in Havana, Cuba to film people crying on their way to honor a dictator who had recommended that the Soviets launch a nuclear attack on the United States.

Our media never fail to demonstrate that there is no limit to how low they can sink. The sickness in the media is only matched by the pro-Castro sentiments in people like Jill Stein, the Green Party presidential candidate working with Hillary Clinton to overturn the results of the 2016 presidential election. Stein remarked, “Fidel Castro was a symbol of the struggle for justice in the shadow of empire. Presente!”

Virtually all day long on Monday, CNN was broadcasting the “news” that Trump had “falsely” claimed that millions had voted illegally in the 2016 presidential election. CNN had not bothered to provide to its viewers the 45 pages of documentation of Trump’s claim from the Trump transition office. Instead, CNN simply dismissed it out of hand.

CNN correspondent Jeff Zeleny reported, “Donald Trump is showing signs tonight of being a sore winner. The president-elect is suggesting with zero evidence to back up his claim that he won the popular vote,” and that “he’s a victim of widespread election fraud.”

Zero evidence? That’s a matter of opinion. Viewers had no way of knowing that the Trump transition team had provided 45 pages of documentation.

Contrast how quickly our media were able to “debunk” Trump’s claim to how long it took them to determine that the attacker at Ohio State University was an Islamic terrorist. On Tuesday morning, Davan Maharaj, editor-in-chief of the Los Angeles Times, sent an email to subscribers listing various headlines from the news, including that “A man drove a car into a crowd of students at Ohio State University and then attacked bystanders with a butcher knife, injuring at least 11. Officials are investigating whether terrorism was a motive.”

This kind of formulation is not only an indictment of the media, which knew the facts about the Islamic motivations of the terrorist by that time, but also of the anonymous “officials” supposedly investigating “whether terrorism was a motive.”

Why are the media so quick to denounce Trump and so eager to whitewash radical Islam?

This sickness in the media is matched by the reaction of leading “progressive” organizations to Castro’s death.

Black Lives Matter says, “There is an overwhelming sense of loss, complicated by fear and anxiety. Although no leader is without their flaws, we must push back against the rhetoric of the right and come to the defense of El Comandante.”

Black Lives Matter supports convicted cop-killer Assata Shakur, who is listed by the FBI as a domestic terrorist with a $1 million bounty on her head. She is living in Cuba under the protection of the Raul Castro regime.

Global Exchange, a group co-founded by Medea Benjamin, who is also the co-founder of CodePink, noted “with sadness and respect the passing of Comandante Fidel Alejandro Castro Ruz.” It added, “His life has been in the service of humanity. His leadership in the Cuban Revolution can never be forgotten. The peoples of Africa, Asia, Latin America, and the United States are beneficiaries of Cuban internationalism—a unique internationalism not based simply on theory but on practice, sacrifice, and love.”

Ironically, Global Exchange claims to be “an international human rights organization.” The group makes money from trips to Cuba.

Not to be outdone, the Cuban Communist “news” organization, Prensa Latina, highlightedhow Rep. Barbara Lee (D-CA) had praised Castro, saying, “President Castro was a recognized world leader who was dedicated to the Cuban people.”

Lee was a secret member of the Committees of Correspondence for Democracy and Socialism, a spin-off of the Communist Party USA. She was Barack Obama’s Western Regional co-chair during the 2008 presidential campaign.