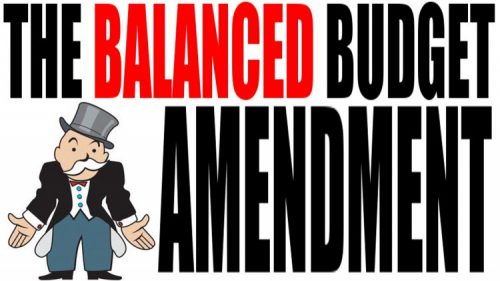 The BBA Made Simple

Say you want your Butler to buy some groceries; so you give him your credit card.  You can:

The first illustrates how our Constitution is written:  The items on which Congress is authorized to spend money are listed – enumerated – in the Constitution.  To see the list, go HERE.

The second illustrates how a balanced budget amendment (BBA) works:  It creates a completely new constitutional authority to spend on whatever the federal government wants to spend money on.  And there is no enforceable limit on the amount of spending.

Our Constitution Limits Spending to the Enumerated Powers

Because everyone has ignored these existing limitations for so long, we now have a national debt of some $20 trillion plus a hundred or so trillion in unfunded liabilities. 1

Various factions are now telling conservatives that the only way to stop out of control federal spending is with a BBA.

Obviously, that is not true.  The constitutional answer is to downsize the federal government to its enumerated powers.  Eliminate federal departments (Education, Energy, Agriculture, Environmental Protection Agency, Housing and Urban Development, etc., etc., etc.), for which there is no constitutional authority.  2

Since our Constitution delegates only a handful of powers to the federal government, most of what they’ve spent money on since the early 1900s is unconstitutional as outside the scope of powers delegated.

Yet our Constitution is still legally in place; and can be dusted off, read, and enforced by a Repentant People.  They can shrink the federal government to the size established by the Constitution which created it. 3

Our Constitution doesn’t provide for a budget.

Spending is to be limited by the enumerated powers.  Pursuant to Art. I, §9, clause 7, the Treasury is to publish periodic Statements and Accounts of the Receipts and Expenditures.  Since the list of objects on which Congress is authorized to spend money is so short, it would be a simple matter to monitor federal spending and receipts.

But since the unconstitutional Budget & Accounting Act of 1921, Presidents and Congress have been putting into the “budget” whatever they want to spend money on.

Oh, Americans!  False friends lead you astray and confuse the path you should take.  Under the pretext of imposing “fiscal responsibility” with a BBA, they would legalize the totalitarian dictatorship which has been developing in this Country for 100 years.

A BBA changes the standard for spending from whether the object is an enumerated power to whatever the federal government wants to spend money on. 4

So a BBA would transform the federal government created by our Constitution from one of enumerated powers only, to one of general and unlimited powers because it would authorize Congress to appropriate funds for – and hence have power over – whatever they or the President decide to put in the budget!

They overlook the profound distinctions between the economies of their own family unit and that of the national government of a Federation of States.  Our federal Constitution sets up a system where Congress is to appropriate funds only to carry out the enumerated powers; and the bills are to be paid with receipts from excise taxes and import tariffs, with any shortfall being made up by a direct assessment on the States apportioned according to population (Art. I, §2, clause 3).

Americans also think that since States have balanced budget amendments, the federal government should have one.  They overlook the profound distinction between the federal Constitution and State Constitutions:  5

A BBA would have the opposite effect of what you have been told.  Instead of limiting the federal government, it legalizes spending which is now unconstitutional as outside the scope of the enumerated powers; transforms the federal government into one which has power over whatever they decide to spend money on; and does nothing to reduce federal spending.

Twenty-eight States have already passed applications for a BBA.  Go HERE to check the status of your State.  Warn your friends and State Legislators.  For a model your State can use to rescind its previous applications, go HERE and look under “Take Action” column, or contact me.  Do not let the malignant elite complete their revolution by replacing our Constitution.

1 State governments are voracious consumers of federal funds.  THIS shows what percentage of your State’s revenue is from federal funds.  Contrary to what RINO State Legislators say, they don’t want federal spending reduced: They want to keep those federal dollars flooding in.

3 Our federal Constitution is short and easy to understand.  The only way you can avoid being misled is to find out for yourself what it says.  Be a Berean (Acts 17:10-12).

“The powers delegated by the proposed Constitution to the federal government are few and defined. Those which are to remain in the State governments are numerous and indefinite. The former will be exercised principally on external objects, as war, peace, negotiation, and foreign commerce; with which last the power of taxation will, for the most part, be connected. The powers reserved to the several States will extend to all the objects which, in the ordinary course of affairs, concern the lives, liberties, and properties of the people, and the internal order, improvement, and prosperity of the State.”