Despite the unprecedented effort to take down President-Elect Donald Trump’s presidential victory, he successfully beat the final challenge to his upcoming presidency: the electoral college vote.

The vile propagandist, millionaire Michael Moore has been flipping out on social media as he attempted a last-ditch move to sway the electoral college to no avail. He has also tweeted out support of a vile anarchist group using the hashtag #DisruptJ20 whose slogan is “No Peaceful Transition” and openly plans to “shut down” the inauguration through violent tactics:

Electors: you’re not seriously going to appoint a president whom the majority of Americans on election day said they didn’t want?

Republican Electors — If you vote your conscience at noon and your state fines you for this, I will pay your fine: https://t.co/LIFVD4xjD4

One last shot: Let’s all send a note to the electors in each of our states before they go 2 bed tonight. Here’s how: https://t.co/Hk6l20divv

Beginning now vigils/protests over the ElectoralCollege are happening at State Capitols in nearly every state. Come: https://t.co/4JtE9x5RjF

A personal appeal from me to the Republican electors of the Electoral College: Do not put our country in jeopardy: https://t.co/LIFVD4xjD4

I’ll be live on Chris Hayes on MSNBC in 5 minutes. Final appeals to the Electoral College.

He pleaded with the electors, writing in part:

“I think you know something is wrong with this man. He just doesn’t seem ‘right.’ One crazy comment or action after another. He may not be well. Don’t you have a responsibility to protect us from someone who might be mentally unstable?”

Speaking of Michael Moore, he is also touting an anarchist group on Twitter who is openly supporting and promoting violent action during the upcoming presidential inauguration.

Disrupt the Inauguration. The Majority have spoken – by nearly 2.7 million votes &counting! Silence is not an option https://t.co/HSmP3pREvy

This final chapter should never have happened, but it did and it solidified Donald Trump’s election as the 45th US president. 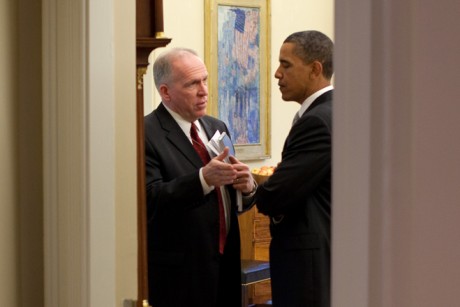 There is an easy way to determine who is a faithful Democratic Party hack in the media and who on the left maintains at least some independence from the party line. Long-time Democrat Bill Moyers thinks it’s an open-and-shut case that Russia’s Vladimir Putin intervened in the election to help Trump and that our democracy is in peril. The Intercept thinks the evidence is weak, and that the CIA may have some other reason for “squaring off directly against Trump.” What could that possibly be?

Could it be that CIA Director John Brennan fears that Trump as president could order an investigation into what the CIA has been up to under President Obama? What could that be? Could the CIA have been interfering in foreign elections, and if so, could such efforts have provoked Russian retaliation?

The folks at the Intercept are on the far-left, but have decided to maintain some semblance of objectivity when it comes to sensational claims of foreign interference in the 2016 campaign. However, the idea they propose—that the controversy can be solved by President Obama declassifying evidence—is not practical. Obama won’t do it, because the intelligence agencies always claim that disclosure will reveal sources and methods. If they do release “evidence,” it will be vague and mostly worthless, just like the stories in The Washington Post and New York Times, where these allegations initially surfaced. These stories are impossible to confirm or deny.

The CIA will want to hide its hand, not because the evidence may implicate Russia in election interference, but because the evidence we do have demonstrates that the CIA is currently interfering in the results of the 2016 U.S. presidential election. That’s the story that cannot be told, and the one which threatens our democracy. The Times and Post are vehicles for this insidious effort.

We do know that CIA Director Brennan is a far-left extremist—just like Obama himself—who once voted for a Communist Party candidate, and whose sympathies for radical Islam are well-known. Questions persist about whether Brennan, an alumnus of Catholic Fordham University, converted to Islam and why he took his oath of office on a copy of the U.S. Constitution and not the Bible.

But rest assured. Snopes, one of those liberal entities that is now part of the Facebook operation to detect “fake news,” says Brennan’s conversion to Islam remains an “unsubstantiated rumor.” Snopes does, however, report that it is true that Brennan “was sworn in to his office not on a Bible but on a copy of the Constitution.” A photo exists of the occurrence.

The real “fake news” surrounds the claims that Putin intervened to help Trump. At a post-election crying session, Hillary Clinton said that Putin hated her because he associated her with protests against his rule in Russia, and he wanted to get even. Putin did accuse her of stoking the protests. But where is the evidence that the alleged hacking was payback? What’s more, is there evidence that the protests in Russia were inspired or funded by the U.S.? Perhaps that issue ought to be resolved.

Since we know that the Obama administration interfered in foreign elections in Canada and Israel, is it that incredible to believe that the Clinton State Department had a hand in the anti-Putin protests? We noted in a column that Obama had tried, but failed, to take out Israeli Prime Minister Benjamin Netanyahu, but did succeed in taking down Canada’s Conservative Party Prime Minister Stephen Harper, a big supporter of Israel. Where was the media outcry over that?

An additional question is whether or not Obama used the CIA to interfere in foreign elections such as those in Russia, Canada or Israel.

It may be the case that the Democrats and their media allies have opened up an entire Pandora’s Box when it comes to interference in elections. Shouldn’t we “drain the swamp” here before we focus on what others have done to us?

The issue of U.S. interference in foreign elections is a matter that should be investigated by Congress if it goes forward with a probe into alleged Russian hacking into the 2016 U.S. presidential election.

If the inquiry regarding Russia determines that Putin wanted to destroy Hillary’s campaign and elect Trump, that doesn’t make Trump a dupe of the Russians. It may have just been a personal Putin vendetta against Hillary.

The real issue is what policies these two candidates would have pursued. We already know that Obama and Hillary staged a Russian reset that was a spectacular failure, and that Putin used this new development in relations between the U.S. and Russia to launch military aggression in Ukraine and Syria. So the former KGB chief running Russia knew he could get the better of Hillary if she became president.

Writing at Forbes, Paul Roderick Gregory looks at the evidence of how Trump poses a far greater threat to Putin, not in threatening military action against the Russian regime, but in seeking American energy independence. He says, “If Putin’s core objective is indeed to protect his petrostate, he would not root for Trump. The US fracking revolution has transformed the world energy market from $100 to $50 oil, has broken Russia’s dominance of the European natural gas market, and has plunged the economy into a prolonged ‘period of stagnation,’ as the Soviets used to call it. Under Trump, Putin can expect a second energy revolution, which will threaten Putin’s hold on power, which looks strong but is weaker than we think.” This is why there have been reports that the Russians are secretly subsidizing anti-fracking groups in the West.

Gregory says that if you look at the energy picture from Putin’s perspective, he would have preferred the Obama/Clinton policies that “blocked pipelines, imposed strict regulations on unconventional oil and gas, froze leases on federal lands, and used other anti-carbon actions” that had the ultimate effect of propping up the value of the oil resources of his shaky regime.

If the Democrats really wanted to take down Putin’s regime, they would abandon their anti-fossil fuel policies, give up on a “climate change” agreement that benefits our adversaries, and support the President-elect’s policies of growth and resource exploration and exploitation. Instead, they want to blather on about Putin’s hatred for Hillary, using anonymous CIA sources in the media to make a case for a narrow probe.

Let the investigations begin. Let them be far-reaching and broad. Let’s determine what Obama and Hillary’s State Department did not only to Russia, but to Israel and Canada as well. And let’s find out if the CIA was part of this destabilization effort.

If pursued by a Republican Congress with the guts to probe what really went on and get to the bottom of what the CIA has been up to, we may be looking at a scandal that could shake the foundations of the political party that has occupied the Oval Office for the past eight years. This might be the only way to teach the CIA a lesson about not interfering with the results of an American election.