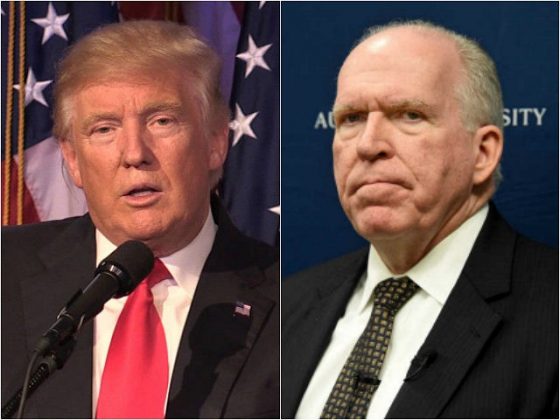 When President Trump was greeted with cheers and strong applause at CIA headquarters, you knew that Obama’s CIA director John Brennan would decide to strike back. The liberal media were quick to quote Brennan as saying that he was “saddened” and “angered” by Trump’s remarks. But where did these quotes come from? Who provided them to the media?

The rest of the story sheds light on how politically partisan the CIA became under Brennan, and how rank-and-file CIA officers who want to “Make America Great Again” seem so happy that he is gone.

Nick Shapiro, the source of the Brennan quotes, is a “former CIA Deputy Chief of Staff,” which sounds impressive until you learn that Shapiro was a partisan mouthpiece not only for Brennan but for President Obama and, before that, John Kerry.

The controversial Brennan admittedly voted communist before joining the CIA and reportedly converted to Islam when he was in Saudi Arabia as CIA station chief. He was in charge of President Obama’s pro-Muslim Brotherhood policy that decimated the Middle East with endless wars that have produced millions of refugees.

“Ex-CIA chief Brennan bashes Trump over speech during CIA visit” was the headline over the predictably partisan CNN story. “Former CIA Director Brennan is deeply saddened and angered at Donald Trump’s despicable display of self-aggrandizement in front of CIA’s Memorial Wall of Agency heroes,” Shapiro said in a statement. “Brennan says that Trump should be ashamed of himself.”

Shapiro’s quotes, attributed to Brennan, were picked up by many other media outlets as well.

In his speech, Trump talked about winning the war against radical Islamic terrorism with the help of the CIA. He discussed his battles with the “dishonest media,” comments that were also greeted enthusiastically.

In contrast to employing a winning strategy against radical Islam, Brennan said it was “regrettable” that Obama’s policy in Syria was a failure, a remark that generated little media interest even though the number of dead in Syria is now estimated as high as 500,000.

It was clear to any objective observer with a set of eyes and ears that Trump’s speech at CIA headquarters was a tremendous success. He was interrupted by applause 11 times.

Brennan, on the defensive for Obama’s policies that have left Europe in a refugee crisis that shows no sign of ending, decided to use Shapiro, a public relations operative, to bash the President.

Despite his CIA affiliation, Shapiro graduated from Tulane University in 2002 with no background in intelligence matters or foreign affairs. He had a Bachelor’s degree in communications and went to work for a public relations agency. He worked on Democrat John Kerry’s 2004 presidential campaign and then as Deputy Press Secretary on Barack Obama’s 2008 election campaign. He went to work for President Obama, handling “national reporters on a 24/7 basis,” according to one account. It looks like he was then dispatched to the CIA to help Brennan with the national media.

Those kinds of media manipulation skills were on display when the media lapped up the anti-Trump allegations from Brennan’s CIA, packaged in the form of anonymous sources. They were designed to depict Trump as winning the presidential election unfairly with the help of the Russians.

During the current controversy, Shapiro put Brennan’s comments on his Twitter feed and then promoted a CNN story attacking Rep. Mike Pompeo (R-KS), Trump’s nominee to run the CIA.

In other words, this is more politics from those who were running the CIA under Obama. They seem to be afraid that Trump and Pompeo will shake up the agency and get to the bottom of the damage that Brennan has inflicted on the CIA.

Kellyanne Conway, counselor to President Trump, was absolutely correct on ABC News’ “This Week” when she called Brennan a “partisan political hack” for criticizing the President’s speech. She noted that Trump got a standing ovation.

On “Fox News Sunday,” White House Chief of Staff Reince Priebus indicated that Brennan was “bitter” over being replaced. He also said that Brennan “has a lot of things that he should answer for in regards to these leaked documents,” a reference to the unverified sexual charges made against Trump that were leaked to CNN and BuzzFeed. Priebus added that “I find the whole thing despicable. I think that it’s unprofessional.”

Rather than quote Brennan, shouldn’t the media investigate the former CIA director? If that’s not possible because of past media collusion with Brennan’s CIA, the job will have to fall on the shoulders of Trump’s new CIA Director Pompeo, and the House and Senate intelligence committees.

A few days before Inauguration day, my 89 year old black preacher dad said God is responsible for Trump becoming president. I thought about the scripture in which God says, “My ways are not your ways.” Frustrated with Obama declaring America no longer a Christian nation http://bit.ly/2iNPKxg while cramming the Left’s ant-God and anti-America agenda down our throats, millions have been intensely praying for our country. If I were God, I would have answered Americans’ prayers by making Ted Cruz president. But God is smarter than me.

Trump is exactly what America needs at this point in time. No traditional politician could get away with confronting anti-American Leftist operatives in the media, calling out Washington establishment corruption and boldly vow to put America first. Few Republicans would have the cojones to even try.

Meanwhile, Americans were crying tears of joy. They have not heard such common sense patriotism in a very, very long time. The Left still does not understand who they are dealing with in Trump and why We the People chose him over Hillary. Standard Leftist tactics for silencing, destroying, intimidating and blocking Republicans (calling them racist, sexist and homophobic) have failed miserably on Trump.

Unlike most pro politicians, Trump has not been neutered in the politically correct school of politicking 101. Our 45th president is simply a patriotic brilliant businessman following his instincts to make America great again.

Here are a few vows Trump made in his Inaugural Address that are as repulsive to the Left as showing Dracula the cross.

“…we are transferring power from Washington, D.C. and giving it back to you, the American People.”

“From this day forward, a new vision will govern our land. From this moment on, it’s going to be America First.” Them’s fightin’ words to the Left (Democrats, Hollywood and mainstream media).

“We will get our people off of welfare and back to work…” The Democrats’ insidious scheme is to always hand out more welfare checks, getting as many Americans as possible addicted, enslaved and dependent upon government. http://bit.ly/2jB6pRv

“I will fight for you with every breath in my body — and I will never, ever let you down.”

“For many decades, we’ve enriched foreign industry at the expense of American industry; subsidized the armies of other countries while allowing for the very sad depletion of our military; we’ve defended other nation’s borders while refusing to defend our own; and spent trillions of dollars overseas while America’s infrastructure has fallen into disrepair and decay.” Leftists barfed.

Trump vowing to govern according to the best interest of our country is basic common sense. And yet, it sounded extraordinary and cause for celebration because Obama’s governing has been the complete opposite.

I strongly encourage President Trump to stay who he is. Keep fearlessly pushing back when attacked by deplorable racially divisive democrat hacks like John Lewis http://washex.am/2jIYv7O and Maxine Waters.

By the way, I LOVED it when Trump exposed CNN as a propaganda outlet, calling them fake news during his press conference. http://bit.ly/2j7VrV7 CNN sunk to a new low, incredibly sowing seeds to inspire the assassination of Trump. http://bit.ly/2jBo0vc This is why it blows my mind that some on our side are offended that Trump does not play by the Left’s dictates for Republican behavior. Trump realizes that it is absurd to respect, try to reason or work with unreasonable evil people obsessed with plotting your demise.

Mr President, please to do not succumb to the Left’s mantra that you should dial-back your behavior; becoming more presidential. This is their trap to control you; trick you into abandoning your instincts which won you the presidency with a majority of Americans in your corner, watching your back.

Bottom line: Mr President, We the People are with you. Please, please, please stay who you are. God bless you and your family. And may God continue blessing America!