If one uses fed fund futures, which are a gauge of market sentiment, FRB Chair Yellen’s testimony was almost a nonevent. Before she began testifying, the market was suggesting a 30% probability of a change in monetary policy in March. Now it is 34%.

Yellen said the Fed panel’s outlook for a “moderate pace” of growth is based on continued stimulative monetary policy and a pickup in global activity. She did not mention Trump administration proposals as a key element in the central bank’s forecast.

The Chair stated that consumer spending has continued to rise at a “healthy pace,” supported by gains in household income and wealth, favorable sentiment and low rates. The Fed chief said changes in fiscal and economic policies could affect the outlook, though she declined to speculate how, adding it is “too early to know” what policy changes will be put in place.

Did yields advance because of Yellen’s remarks suggesting a gradual increase in the overnight rate, which then may suggest the central bank could fall behind the proverbial inflationary curve?

Speaking of which, wholesale prices jumped in January by the most since September 2012, led by higher gasoline costs, thus suggesting inflation is beginning to stir. The 0.6% gain in the PPI followed a 0.2% advance in the prior month. Consensus called for a 0.3% rise.

Equites led by the financials, staged an advance on economic optimism. 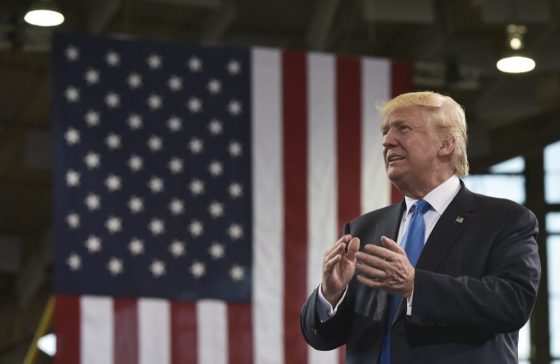 I’ve heard that making sausage is a pretty messy, ugly and unpleasant process to witness. Well so is implementing real change in Washington DC. I’ve said it before and I’ll say it again. I believe God gave us Trump because I do not believe a pro-politician could pull off dismantling so many Leftist sacred cow strongholds at the lighting speed at which Trump is moving.

I remember Bahamian actor Sidney Poitier saying when he came to America he simply pursued his dream, undeterred by supposed limits for blacks. Consequently in 1964, Poitier became the first black to win an Academy Award for Best Actor.

Political outsider Trump is cleaning up the mess, undeterred by corrupt DC establishment procedures designed to continue the status quo. Consequently, we have Scott Pruitt fixing the overreaching anti-business tyranny of the EPA. http://bit.ly/2keXsBi We have Jeff Sessions who will implement equal justice for all Americans http://fxn.ws/2kfa2Ae, unlike Obama’s attorneys general. One said he would not prosecuted fellow blacks. http://bit.ly/2kDYa9B The other supports Black Lives Matter’s infamous lie that cops are racist. http://bit.ly/2lBNbf9 Leftists’ heads are exploding because new Education Secretary, Betsy DeVos vows to ensure that every child receives a quality education. http://fxn.ws/2jVZqBu

While some of the rude, crude and violent illegal actions of Leftist anti-Trump protesters is organic, the vast majority of it is paid for by America hating billionaire, George Soros. From the airport protests http://nws.mx/2khV4st to the Women’s March http://bit.ly/2kDVI2Y to Black Lives Matter http://bit.ly/2aYw0Ol murdering cops and numerous other incidents of chaos in our streets, Soros is the money man behind the curtain. Soros is also tied to the Left’s campaign to impeach Trump. http://bit.ly/2kduRsi

Even before Trump took his oath of office, the Left launched their immoral, unethical and lawless 1,460-day (four-year) plan to destroy Trump. The Left intends to block Trump from implementing everything we elected him to do.

Despite Leftists cautioning their side to tone down their over-the-top hysteria, the Left’s rabid opposition to Trump continues to escalate to absurd levels. http://bit.ly/2lAQenh It’s a bright sunny day. If Trump comments about it, the Left will try to convince the public that it is raining, and Trump lied about the sun.

I submit that the Left can not tone down their brain-dead emotion-driven foot-stomping temper tantrums because it is who they are. It is like the old joke, “I helped you because you promised not to bite me. Why did you bite me?” The snake replied, “I’m a snake. It’s what I do.”

When Education Secretary Betsy DeVos showed up for work, she was attacked by protesters. One jerk even stood in front of DeVos’ car when she tried to leave. http://bit.ly/2keykdI Folks, the Left is going to pull this crap every day for the next 4 years. When Leftists push free speech to breaking the law and destroying public and private property, I say lock their derrieres up! Thank God. Finally, a Republican administration that is doing just that. http://bit.ly/2kgpwzA

The Left’s goal is to cement their lie that a majority of Americans regret voting for Trump and hate his agenda. In other words, they hope to “Bush” Trump. Relentless unchallenged distortions and lies about President George W. Bush caused his approval to plummet to 33% when he left office. Clearly, the Left has begun their triple-the-intensity campaign to do even worse damage to Trump’s approval.

All seeking to see America made great again (patriots) must pull out all the stops, using their creativity and every tool at their disposal to counter the Left’s tsunami of anti-Trump and anti-Trump agenda lies.

The Left relentlessly and creatively sold us their far-left-radical Trojan Horse disguised in the form of an articulate black man. From Greek columns in the background when he spoke, extra reverb on his microphone to kindergartners mandated to sing of his greatness, the Left practically branded Obama a deity. As part of Black History Month indoctrination, kindergartners were taught to sing, “Barack Obama is the man” and “He’s our man, yes we can!” http://bit.ly/2lvAGoT

In celebration of capitalism and the entrepreneur spirit, it would be fun to see kids start Trump Lemonade stands.

Folks, the Left still does not get it. They do not understand the Trump Revolution. I realized something was amiss during the campaign. I witnessed thousands of Americans of all stripes from well-dressed white seniors to black bikers covered in tattoos waiting in line, enduring 85 degree Florida heat and sun, hoping to get into the Trump rally at Daytona Beach Convention Center.

If we are relentless in expressing our support for Trump implementing his 100 day plan, the Left’s efforts to “Bush” Trump via chaos in our streets, fake news and violence with fail.

Oh, one last point. I’ve heard concerns that the Left will react violently if we resume Trump rallies. Well, I am sorry folks, but freedom “ain’t” free. As a matter of fact, God has designed life in such a way that anything worth having requires backbone and risks.