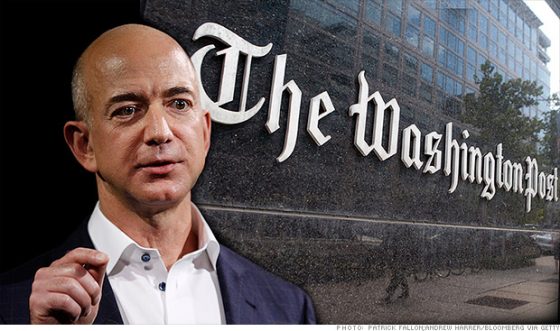 One of The Washington Post’s big disclosures on Sunday was a front-page story about President Donald Trump’s choice of a cemetery. It was the latest contribution from reporter David A. Fahrenthold, whose job it is to probe every aspect of the life of the new President, no matter how esoteric and trivial. On the other hand, when it comes to covering the paper’s owner, Amazon’s Jeff Bezos, and his ties to the CIA and the National Security Agency (NSA), the paper is AWOL.

Bezos is known for Amazon.com, the world’s largest online shopping retailer, and said at the time he purchased the paper for $250 million in 2013, “The Post has the good fortune of being the newspaper of the capital city of the United States of America. That’s a great starting point to being a national and even global publication.”

During and after the 2016 presidential campaign and election, writes Cheryl K. Chumley of The Washington Times, a competitor, Bezos decided to “sic his Post team on Mr. Trump.” This is evident in the paper’s obsessive focus on Trump as an alleged Russian agent of influence, a charge also peddled by the U.S. intelligence community. She notes the CIA’s “shady background with media infiltration,” as well as the “present-day tight, multimillion dollar relations” between the Post (via Bezos) and the CIA.

This untold story involves an important global aspect of his business—the secretive Amazon Web Services (AWS), which specializes in cloud-computing systems for storage. It advertises its wares to the federal government by saying, “Our cloud services can be employed to meet mandates, reduce costs, drive efficiencies, and increase innovation across Civilian agencies and the Department of Defense.”

It appears that much of the growth for AWS has come because of relationships with the intelligence community.

Post reporter Amrita Jayakumar wrote a story published on April 23, 2015, mentioning that Amazon Web Services “is widely known for providing computing power to start-ups and companies such as Netflix and Airbnb, and media organizations, including The Washington Post.” The next to the last paragraph of the story noted, “The company also won a $600 million contract to design a private cloud for the CIA, and prevailed against a bid protest, cementing its status as a trusted vendor, analysts said.”

This is journalistic jargon designed to conceal the fact that Amazon’s bid was $54 million higher than IBM’s. The Government Accountability Office (GAO), which reviews contract-bidding processes at government agencies, looked into the matter and urged the CIA to re-open the bids. IBM eventually gave up the fight.

After the CIA began using Amazon cloud services, it was announced that the NSA was moving some of its IT infrastructure to AWS.

But how secure are these cloud networks?

At a conference in 2015, representatives of the CIA and NSA were said to be confident and happy with Amazon’s cloud services. “Intelligence community loves its new Amazon cloud” was the headline over a Fortune story by Barb Darrow on June 29, 2015. Amazon senior vice president of web services Andy Jassy said that security-conscious companies would use the same kind of services because they figured that “if the security and performance is good [enough] for the CIA, then it’s probably good enough for us.”

Now, that security is being questioned. The highly classified CIA documents released by WikiLeaks originated from an “isolated, high-security network” at the CIA’s Center for Cyber Intelligence in Langley, Virginia. The leaks involve tools that the CIA can reportedly use to hack smartphones, apps and other gadgets for surveillance. The hacking tools can be used against terrorists and other foreign enemies and adversaries. But the purpose of the leak from WikiLeaks, a known conduit for Russia, is to create the impression that the hacking tools are being used on ordinary Americans.

An AP story carried by the Post said, “It was not immediately clear how WikiLeaks obtained the information,” but that it could have come from a rogue employee, a federal contractor or penetration of a staging server where such information might have been temporarily stored. A staging server can be in a cloud.

Don’t look for the Post to investigate the source of the leaks. After all, it is dependent on similar leaks for stories damaging to the Trump administration.

But wouldn’t it be interesting to discover that one of Amazon’s cloud services had been penetrated by the Russians or their agents? It would mean that the paper is attacking Trump for ties to the Russians when an associated company was aiding them.

The Post is so bad on reporting on the CIA—in contrast to using information supplied by the CIA—that on February 20 it published an article from a former agency official who took a shot at President Trump without disclosing his own partisan connections. “I didn’t think I’d ever leave the CIA. But because of Trump, I quit,” was the headline, with the author’s bio as the following: “Edward Price worked at the CIA from 2006 until this month, most recently as the spokesman for the National Security Council.”

“Nearly 15 years ago, I informed my skeptical father that I was pursuing a job with the Central Intelligence Agency,” Price said. He added that he intended to pursue a career there. “That changed when I formally resigned last week. Despite working proudly for Republican and Democratic presidents, I reluctantly concluded that I cannot in good faith serve this administration as an intelligence professional.”

The allegations were picked up by many other media organs. “Veteran CIA Analyst Quits Agency Over Trump’s Intel Moves, Criticism,” was an NBC headline. “CIA analyst quits over Trump disregard for intelligence,” was the MSNBC headline. Mediaite ran with, “Former National Security Council Spox Writes Op-Ed to Explain How Trump Led Him to Quit CIA.” Real Clear Politics proclaimed, “Former CIA Analyst Edward Price: I Left the CIA Because Of Trump.”

But his alleged bipartisan credentials were a lie. This “professional” had been acting in an unprofessional manner.

The Post was forced to add a clarification which said, “This column should have included a disclosure of donations made by author Edward Price in support of 2016 Democratic presidential nominee Hillary Clinton. In August, Price gave a total of $5,000 to the Clinton campaign and the Democratic Party.”

It apparently didn’t occur to anyone at the Post to question this former CIA official’s credentials before running his misleading piece.

If the standards are this low for an op-ed contributor to The Washington Post, you can imagine that the owner’s relationship with the CIA will be treated in strictest confidence and never questioned.

The investigative engines of the paper were revved up to cover his purchase of the biggest house in Washington, D.C. Digging through real estate records, the paper determined that Bezos bought the house through a front company for $23 million in cash. The buyer of the house was identified as “Cherry Revocable Trust.” The Post unleashed its investigative reporters and revealed that Bezos was the purchaser.

The Bezos house is located in the Kalorama neighborhood, one of the most expensive, where the Obamas live. Just a coincidence, we’re sure.

One thought on “The Washington Post, Amazon, and the Intelligence Community”