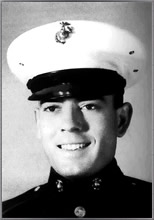 Ever since his forced resignation in disgrace, Dan Rather has continued on a downward spiral. His career, such as it is, has been kept alive by appearances on the Rachel Maddow show on MSNBC, where he takes potshots at his former employer and President Donald Trump. It is a sad spectacle.

Rather has now suffered another major embarrassment. The former anchorman of the CBS Evening News has been accused by a website devoted to exposing military corruption of falsely claiming to have been a member of the U.S. Marine Corps.

The editor-in-chief of the website www.MilitaryCorruption.com, retired U.S. Army Major Glenn MacDonald, says he stumbled across a published photo of Rather in a dress blue Marine Corps uniform in his book Rather Outspoken and decided to investigate the claim. The photo caption, “as a young Marine,” clearly indicates Rather had been a member in good standing of the Marine Corps.

But the truth, MacDonald says, is that Rather left the Marines before completing boot camp and the photo was obtained under questionable circumstances.

It has been known for years that Rather was discharged before he finished basic training. Those facts were established by investigator B.J. Burkett in his book Stolen Valor.

“In our exclusive story, we interviewed a senior retired Marine noncommissioned officer who was in around the same time as Rather claimed to have been in the Marines,” MacDonald said. “He told us the photo in question probably was the result of a policy the Corps had then of putting a blue blouse (from dress uniform) and ‘white cover’ (the saucer cap) on each ‘boot’ several weeks into their training to make sure the Marines had head shots of members of each training cycle to use for the Marine yearbook each successful Jarhead received at completion of USMC boot camp.”

That is the photo that Rather somehow obtained to use in his book so he could claim to be a “young Marine.”

“Dan Rather has written several biographical books over the past 40 years, but this was the first time the Texan climbed out on a limb and portrayed himself in print as a onetime member of the Corps,” reported MilitaryCorruption.com “It was a risky move, as Dan knows he didn’t graduate from boot camp.”

MacDonald said the photo used by Rather in his book was Marine Corps property, not his to use for self-promotion. So how did Rather get his hands on his photo, especially when he failed to graduate back in 1954?

We left questions about this with Rather’s new website, www.newsandgutsmedia.com, but have not received a response.

MacDonald tells AIM that the story has to be set straight for the sake of all of those who did serve. “I remembered all the Marines I had known over the years, some of them now dead, who would spin in their graves to know such a self-righteous phony was trying to trick Americans into thinking he was once part of their beloved Corps,” he said.

MilitaryCorruption.com reports that Rather had been verbally referring to himself as having been a Marine, or in the Marines, and “he must have figured at this stage of his career that he could get away with publishing the photo and deliberately deceiving the public.”

Ironically, Rather was forced out of his job at CBS after having been exposed by bloggers for using fake documents to misrepresent the military service of then President George W. Bush.

In the case of the Dan Rather-as-Marine story, notes WorldNetDaily, Rather has published fake news about himself.

Strangely, Rather was played by actor Robert Redford in the movie, “Truth” about the CBS phony documents scandal. Rather still insists he got the story right.

Almost as bizarre as Rather, Redford played reporter Bob Woodward in a movie about the Nixon Watergate scandal and wrote a recent column for The Washington Post, “45 years after Watergate, the truth is again in danger.”

In the column, which blasted President Trump’s treatment of the press, Redford said, “Sound and accurate journalism defends our democracy. It’s one of the most effective weapons we have to restrain the power-hungry.”

The column appeared before Trump’s claim about being wiretapped by the Obama administration was confirmed in revelations about the Watergate-style surveillance of Trump officials implicating former Obama National Security Adviser Susan Rice.