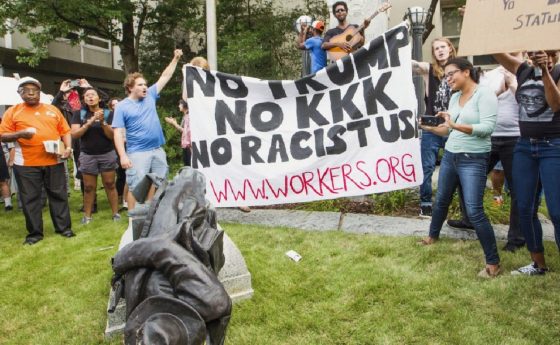 Take a look at the picture on this post. Www.workers.org… those are communists. They toppled a Civil War monument last night in Durham, North Carolina and no one stopped them. Then they stomped on it. The left is destroying our history and our culture and the powers that be are allowing it to happen. I couldn’t believe what I was seeing last night. In America, radicals and communists are literally tearing down monuments to our history. It doesn’t matter whether they are good, bad or indifferent. You don’t destroy your history just because you don’t approve of it.

These useful idiots were yelling, “No KKK! No fascists! USA!!” I agree… I don’t want the KKK either. But I also don’t want the communists, Antifa or Black Lives Matter. This happened in front of a local government building. How come the police didn’t step in here? This is the left stepping up their game just as they promised and the white nationalists will do the same. They toppled a nearly century-old statue of a Confederate soldier on Monday at a rally against racism and instead went with fascism.

Video posted to Twitter shows protestors surrounding the statue and chanting “No KKK! No fascists! USA” as several protestors appear to pull down the statue with a rope.

WNCN reports the statue was dedicated in Durham in 1924 and was located in front of a local government building.

The statue represented a soldier who fought in the Civil War and an inscription on the front read “The Confederate States of America.”

One organizer of the protest told WNCN that toppling the statue was in response to the violence at a white supremacist rally in Charlottesville, Va. this weekend.

“It needs to be removed,” organizer Loan Tran told the news station. “These Confederate statues in Durham, in North Carolina, all across the country.”

The protest follows the “Unite the Right” rally in Virginia this weekend, where white supremacists, white nationalists and neo-Nazis gathered to protest the city of Charlottesville’s decision to remove a statue of Confederate Gen. Robert E. Lee.

Radicals in Durham brought a ladder up to the statue and used a rope to pull down the Confederate Soldier’s Monument that was dedicated in 1924. A mob of dozens cheered as the statue of a soldier holding a rifle fell to the ground in front of an old courthouse building that now houses local government offices. Seconds after the monument fell, protesters began kicking the crumpled bronze monument and stomping on it.

They are redefining our history. This isn’t the America I grew up in or have loved my whole life. This is something entirely different and it’s evil and dark. This will send shock waves through the nation and it will not end well. When they get done with Civil War monuments, they will turn on our Founding Fathers as well. It’s coming. What was done in Durham was actually against the law there and not the way to handle this. Anger and hatred will follow and a lot of it will not be from white nationalists. Americans won’t stand for communists destroying our heritage.

After the statue fell, several dozen protesters congregated on the street in front of the old courthouse. Some took pictures standing or sitting on the toppled soldier, in front of a pedestal inscribed with the words “In Memory of the Boys Who Wore The Gray.” Police cruisers blocked off the street and officers looked on — some filming. As it got dark, rally participants began to peacefully disperse. This is beyond disgraceful and those police officers should be fired for behaving this way. We can’t allow communists to do this freely… you are supposed to employ the rule of law.

Equities staged a bifurcated rebound on the perception that tensions are easing with North Korea. Volume was anemic as trading was dominated by technology based momentum programs.

Data released this week will offer some insight into third quarter economic growth. As I wrote yesterday, the St. Louis Fed is projecting a 3.68% 3Q rate. To write the obvious, a lot can happen in the next six weeks and preliminary estimates should always be treated with suspect.

Today retail sales are released as is a housing sentiment indicator. How will such be interpreted?

All will accept the method of retail shopping is changing, albeit perhaps not to the degree many may believe. According to the Commerce Department during the first quarter of 2017, approximately 8% of total retail sales occurred via the Internet. Like many, I thought this amount would be higher.

For what it is worth department, Wal-Mart is 10% of non-automotive retail sales and its Internet sales are included in the 8% figure mentioned above.

Yes, the overall growth rate is hyperbolic as compared to traditional channels, but on-line sales are far from taking over. I was also surprised to learn annual same store sales from “non store retailers” are up only 10% on annual pace according to the Commerce Department. Based upon the popular narrative, I would have thought sale increases would be considerably higher.

Perhaps the greatest impact of on-line sales is the additional venues of selling a product where often times price is only the determinate of a purchasing decision.

Analysts are expecting a 0.3% increase in overall retail sale in July, up 0.4% ex autos.

It has been reported ad nauseum that alleged Charlottesville killer James Alex Fields Jr., 20, is a white supremacist. But high school teacher Derek Weimer revealed among other things, that James Alex Fields Jr., who reportedly slammed his vehicle into a group of protesters at the infamous Unite The Right rally in Virginia over the weekend, was diagnosed with schizophrenia and “had been prescribed an anti-psychotic medication.”

No stranger to violence, the “admirer of Adolf Hitler and Nazi Germany” also “was arrested and put in juvenile detention after his mother reported in 2011 that he stood behind her wielding a 12-inch knife.”

It is not clear if James Alex Fields Jr. is still medicated.

Do you think his schizophrenia had anything to do with it?

Do you think his #Schizophrenia had anything to do with it?

While the mainstream media seemingly collaborated to uniformly describe Antifa, the Democratic Socialists of America (DSA), the International Socialist Organization (ISO), Industrial Workers of the World (IWW), Black Lives Matter and others as “counter protestors,” the individuals who came to protest the “Unite The Right” rally are communists and their allies.

Excuse the brevity, but it is way past time that Americans – including conservatives – recognize that communists exist and they have power. This discussion is important – vital, in fact.

The unfortunate victims of James Alex Fields Jr. were communists and their allies. At least the ones that this author has been able to find so far.

By the way, did you know that “clergy” can work with the Antifa?

Let’s agree that Heather Heyer was brutally murdered by a mentally ill white supremacist in what could be described as a domestic terror attack (Is it still a terror attack if the perpetrator was mentally ill?). But what the mainstream media leaves out, and they should NOT leave it out, is that Heather Heyer was likely a member of the Industrial Workers of the World (a.k.a. “Wobbly”)

According to the Urban Dictionary, “Many wobblies subscribe to some form of anarchism.”

The Preamble to the IWW Constitution reads in part,

“Instead of the conservative motto, ‘A fair day’s wage for a fair day’s work,’ we must inscribe on our banner the revolutionary watchword, ‘Abolition of the wage system.’

It is the historic mission of the working class to do away with capitalism. The army of production must be organized, not only for everyday struggle with capitalists, but also to carry on production when capitalism shall have been overthrown. By organizing industrially we are forming the structure of the new society within the shell of the old.” (author emphasis)

Heather Heyer was a “strong woman,” a paralegal, “brave,” but she was also a revolutionary.

Don’t let the media erase the fact that Heather Heyer, the woman killed at #Charlottesville, was a member of the @_IWW. She was our comrade.

Says the capitalist hoping to capitalize on the death of a comrade, not mentioning that Heather Heyer was a Socialist and an IWW member. https://t.co/lD5WMt0Jph

Heather Heyer was a socialist working with IWW. Stop erasing her.

Two of our members are confirmed hurt in Charlottesville with a leg injury and a concussion and thankfully recovering and being discharged.

The #WhiteSupremacists in #Charlottesville murdered a comrade from the #IWW and injured 2 DSA members. The fascists won’t win #defendcville https://t.co/nh9K9JFWtT

Isn’t it funny that the mainstream media, with all of their resources, is not interested in the fact that James Alex Fields Jr. has schizophrenia or that his victims were communists and their allies? Why do you think that is?