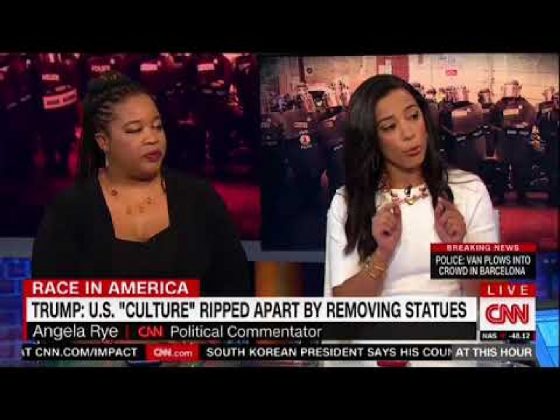 President Trump predicted this and he wasn’t the only one. I did and so did many other pundits. The communists, radicals and leftists never intended to stop at taking down Confederate statues. Their real target was the Founding Fathers and destroying the heritage and history of this country. It’s what communists do. They want to destroy the Constitution and rewrite our history and propagandic media outlets such as CNN are helping to push their agenda.

CNN political commentator Angela Rye either doesn’t know history at all or is just a racist, bigoted liar. It’s true that the Founding Fathers owned slaves. Thomas Jefferson for example had slaves who he wanted to free, but could not because he had debts. By law, he was prohibited from freeing them. George Washington’s family also owned slaves, but Washington did not approve of it either. In fact, they set up our Founding Documents the way they did with careful wording so that slavery would eventually be abolished. Look it up, that’s exactly what happened. I was never taught that everything we did as a nation was perfect, but I have read our real history and our nation is a great and good one. These people want to destroy that.

President Trump predicted that people will start going after statues of our slave-owning Founding Fathers after Confederate monuments are taken down and he couldn’t be more right.

On Thursday, CNN political commentator Angela Rye made an impassioned plea to remove all vestiges of slave owners around the United States, saying:

“I think that we have to get to the heart of the problem here, and the heart of the problem is the way in which many of us were taught American history. American history is not all glorious… George Washington was a slave owner and we need to call slave owners out for what they are, whether we think they were protecting American freedom or not, he wasn’t protecting my freedom.”

Rye added, “My ancestors weren’t deemed human beings to him. And so, to me, I don’t care if it’s a George Washington statue, or a Thomas Jefferson statue, or a Robert E. Lee statue, they all need to come down.”

When she was confronted with the idea that she was “feeding in to Steve Bannon’s and Donald Trump’s talking points,” Rye recoiled, saying she was “calling out white supremacy for what it is.”

No, these statues should not come down. They are reminders of our past and history. I don’t see these people calling for the statues of Robert Byrd to come down, or the Lenin statue in Seattle to be removed. They hate the Founding Fathers because they were white and if you get right down to it, the primary instigators in all this are communists, who want to rip the very fabric of this nation apart. Trump is not a racist or a white supremacist. What about black supremacy and racism? Because there is sure plenty of that here as well.

This woman is disingenuous. The violence she speaks of happened all right… but whites and other races faced it as well. The first legal slave owner in America was black. And there were many white indentured slaves in America. And you might want to speak to the Chinese about slavery as well. All of this has nothing to do with modern day America and we owe nothing to these people. This will probably become the norm now as a pastor in Chicago is calling for the same thing. And someone burned an Abraham Lincoln statue there yesterday. None of these people know the first thing about our history and what’s more, they don’t care. They just want to burn it all down. One last thing… George Washington united and gave birth to this country… the Civil War sought to tear it apart. It is idiotic to compare the two.

I will close with a quote from one of my favorite writers, Daniel Greenfield: “Civilizations are built on virtue. Without virtue, there is no civilization.” Reason and virtue are in short supply in America today and our Republic is in danger of falling. An SDS radical and communist once wrote: “The issue is never the issue. The issue is always the revolution.”