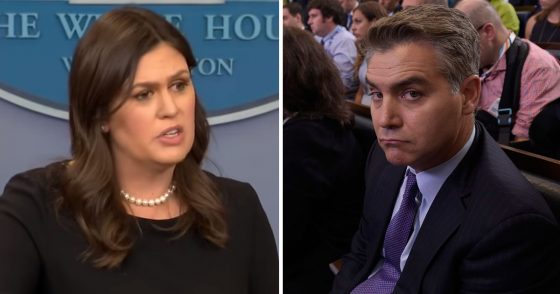 Yesterday, CNN’s Jim Acosta once again stepped way out of line. Big surprise. At the White House press briefing, he launched into another attack on the Trump administration. This time he ranted on about the separation of illegal alien families at the border… tearing apart parents from children. Except he didn’t mention this is a policy that was enforced by Obama and one that the Republicans are currently trying to undo legally. White House Press Secretary Sarah Huckabee Sanders let Acosta have it with both barrels this time, telling him, “I know it’s hard for you to understand even short sentences.” Too true. Nice.

Following a question about North Korea, Acosta asked Sanders about comments made by Attorney General Jeff Sessions earlier in the day, where Sessions quoted a verse from the Bible while seeking to explain immigrant children being split up from their parents. “Can I just ask a second question, completely unrelated, on these children who are being separated from their families as they come across the border,” Acosta asked. “The attorney general earlier today said that somehow there’s a justification for this in the Bible. Where does it say in the Bible that it’s moral to take children away from their mothers?”

Wow, now that’s richly hypocritical even for Acosta. I don’t think he’s even a little bit religious, but boy, did he reach for the Bible and Jesus when he needed a weapon. That’s immoral, Jim. By the way, where in the Bible does it say its moral to break the law by illegally sneaking into the United States? I don’t remember that passage and I happen to be a devout Christian.

Sanders actually answered this hack. “I’m not aware of the Attorney General’s comments or what he would be referencing. I can say that it is very Biblical to enforce the law. That is actually repeated a number of times throughout the Bible. (Acosta interrupts) Hold on, Jim, if you’ll let me finish — again, I’m not going to comment on the Attorney’s specific comments that I haven’t seen.”

Acosta then snapped at Sanders, “You just said it’s in the Bible to follow the law.” That is when Sarah had had enough of this cretin: “That’s not what I said; I know it’s hard for you to understand even short sentences, I guess, but please don’t take my words out of context, but the separation of alien families is the product of the same legal loopholes that Democrats refuse to close, and these laws are the same that have been on the books for over a decade. The President is simply enforcing them.” Damn, that was good.

Of course, Acosta ignored the need to enforce the nation’s laws and made an uber-emotional appeal: “Can you imagine the horror that these children must be going through when they come across the border and they’re with their parents and suddenly they’re pulled away from their parents? Why is the government doing this?” He doesn’t give a flying crap about those kids. The left wants them as a voter base and progressive Republicans want them as cheap slave labor. Spare us your faux outrage Acosta. Sanders bluntly replied, “Because it’s the law, and that’s what the law states.” Acosta, being the liar and leftist tool that he is, replied, “It doesn’t have to be the law. You guys don’t have to do that.” He knows that’s dishonest and that it is the Democrats themselves doing it and keeping that law in place. What a self-serving jerk.

Sanders put it right back on the Democrats: “You’re right. It doesn’t have to be the law, and the President has actually called on Democrats in Congress to fix those loopholes. The Democrats have failed to come to the table, failed to help this President close these loopholes and fix this problem. We don’t want this to be a problem; the President has tried to address it a number of occasions; we’ve laid out a proposal and Democrats simply refuse to do their job and fix the problem.” Game, set, match. Acosta loses again.

Brian Karem, a Playboy Magazine reporter who is also a CNN political analyst, jumped on the bandwagon, shouting at Sanders while she was responding to another reporter’s question: “You’re a parent, don’t you have any empathy for what these people are going through?” Karem exclaimed. “They have less than you do! C’mon Sarah, seriously!” he added. “Seriously!” “I’m trying to be serious but I’m not gonna let you talk out of turn,” Sanders responded. “These people have nothing, they come over here with nothing!” he continued.

“Hey Brian, I know you want to get some more TV time,” Sanders interjected, “but that’s not what this is about. I want to recognize you, go ahead Jill.”

“It’s not that,” Karem objected, “it’s not about that, it’s about you not answering a question, Sarah.”

“Honestly answer the question!” he continued. “It’s a serious question! These people have nothing, they come to the border with nothing, and you throw children in cages. You’re a parent – you’re a parent of young children!”

“Don’t you have any empathy for what they go through?” he asked.

Sanders ignored the question and went on to the next reporter as Karem turned away in disgust.

Children are not being thrown in cages. That was under Obama, you moron. I’m with Jeff Sessions on this one: “Stop crossing the border illegally with children,” Attorney General Jeff Sessions said in defense of the policy. “Apply to enter lawfully. Wait your turn.” Amen to that. Come in the right way or not at all.

I have called for a long time now for Acosta to have his White House press credentials pulled. The same should be done to Brian Karem, April Ryan and a number of others. If they can’t act like professionals and have some decorum, kick them out and tell them not to come back. Sanders rocks and was very professional in handling this, just as she always is. I’ve had it with these leftist propagandists.

4 thoughts on “Sarah Huckabee Sanders Nails Acosta: ‘I Know It’s Hard For You To Understand Even Short Sentences’”