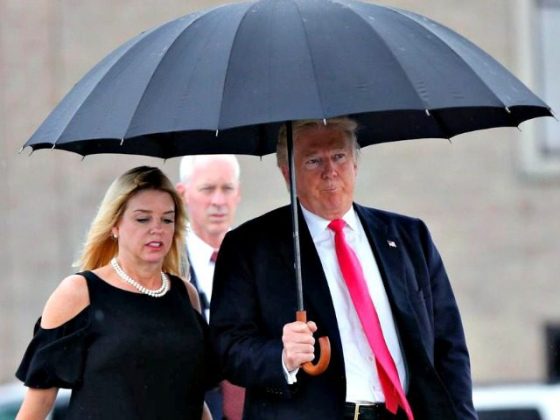 Things are quickly spiraling out of control here in America as communists, progressives, liberals, Democrats… whatever you want to call them have stepped up physical attacks against conservative politicians. First, it was Homeland Security Secretary Kirstjen Nielsen who was harassed at a Mexican restaurant in D.C. and was basically forced to flee before it escalated. Those were the Democratic Socialists of America and one of their comrades was a paralegal who works at the Department of Justice. The next day, they surrounded her home and protested her there as well until she left.

Then came White House Press Secretary Sarah Huckabee Sanders and her family who were booted from The Red Hen restaurant in Lexington, VA over her support for President Trump’s desire to ban transgender people from the military. And don’t forget the threats of violence from actor Peter Fonda and other celebrities against Nielsen, Sanders, Barron Trump and others.

Now, it’s Florida Attorney General Pam Bondi’s turn. She is of course a Republican and a supporter of President Trump. Yesterday, she attended a screening of the Mr. Rogers documentary at a movie theater entitled, “Won’t You Be My Neighbor?” A video posted to Twitter shows Bondi being escorted out of the building by police officers as protesters chant slogans and demand Bondi support healthcare provisions from the Affordable Care Act.

Pam Bondi attempted to attend a screening of the Mister Rogers documentary a day after announcing her plan to end protections for health care consumers with pre-existing conditions. Here, via @timintampa, is what happened. pic.twitter.com/zMLrSayS8M

“What would Mr. Rogers think about you and your legacy in Florida? Taking away health insurance from people with pre-existing conditions, Pam Bondi!” yelled Maria José Chapa, a labor organizer, according to the Tampa Bay Times. Another person shouted at Bondi, “You’re a horrible person!” “Shame on you!” These are union thugs and communists. They also slammed Bondi over immigration. Timothy Heberlein of the left-leaning group Organize Florida, took the video and uploaded it to Twitter.

Erick Erickson over at The Daily Wire wrote an excellent piece yesterday called, “The Left’s Most Dangerous Game.” He spoke of Hitler using brown-shirted thugs and Mussolini using black-shirted thugs in the 1930’s and the uncanny resemblance to what the left is doing currently. He also brought up the antics of Antifa and how the left is turning into a communist mob. These people are communists and fascists and they are stepping up their game right on cue against the right and President Trump.

Erickson: “The Nazi and Fascist thugs would harass businesses that were not sufficiently supportive of their dictators’ policies. Private citizens would be harassed, threatened and eventually beaten or shot. Government officials not considered sufficiently supportive might be killed or scared badly enough to fall in line. The mobilization of the mob to strike fear in the hearts of its opponents is literally a tactic used by fascists, Nazis and communists.” That’s exactly what is happening now and it’s going to get much, much worse and far more violent if this keeps up.

The Tampa Bay Times reports Bondi received a police escort because of the threats to her safety. Bondi protester Maria Jose Chapa said it was an impromptu demonstration after someone spotted the attorney general, who has a national following as a contributor on Fox News and as ally of President Trump. The video shows that as Bondi and her companion left the theater surrounded by officers, Chapa followed her, yelling.

Heberlein told the Times that he and his comrades would have confronted Bondi regardless of the movie she was seeing, but noted that the neighborly message of “Mister Rogers’ Neighborhood” clashed with Bondi’s recent decision to join 19 other Republican-led states in a lawsuit to overturn key tenets of the Affordable Care Act. Gee, I thought Mr. Rogers was a conservative. They are twisting his message to fit their political agenda. Shocker there. In particular, the suit would end the act’s protection for Americans with pre-existing conditions from insurance company discrimination. Under a free market that would happen just as it should. Special programs could be set up for pre-existing conditions. We don’t need Marxist Obamacare to take care of the ill in this country.

“I feel like even if we went to see ‘The Incredibles’ we would have said something,” Heberlein said. I’m sure they would have because that’s what communists do. In a phone call, Bondi characterized the protesters as being ready for a confrontation. “We were in a movie about anti-bullying and practicing peace and love and tolerance and accepting of people for their differences,” Bondi said. “That’s what Mr. Rogers is all about. We all believe in free speech, but there’s a big difference there.” She’s right and that little confrontation could have turned very violent and ugly fast. If the left keeps this up, it’s only a matter of time before someone gets severely hurt or killed and then the whole left vs. right thing is going to explode. That’s what the radicals want. It’s always been their end game.

Former Democratic Rep. Jason Altmire for Pennsylvania’s 4th congressional district expressed concern and fear over increasing levels of intolerance towards Trump administration officials. “Public officials heckled at movies, denied service at public restaurants, have water thrown on them when dining.” “Where are we going with this?” he asked. Straight into chaos and revolt it would seem. Somewhere Saul Alinsky is smiling.

.@PressSec got kicked out of the Red Hen restaurant in Lexington, Va tonight. Apparently the owner didn’t want to serve her and her party out of moral conviction. pic.twitter.com/jr3bfiY3XY

Last night I was told by the owner of Red Hen in Lexington, VA to leave because I work for @POTUS and I politely left. Her actions say far more about her than about me. I always do my best to treat people, including those I disagree with, respectfully and will continue to do so