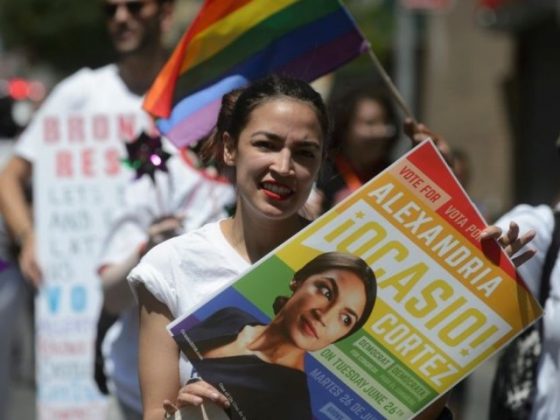 Democratic Socialists of America New York candidate Alexandria Ocasio-Cortez won in an upset last night in the primary against incumbent Rep. Joe Crowley (D-NY) in the 14th congressional district there. She is a 28 year-old Latino and the new communist millennial face of the Democratic Party. Her district spans Queens and the Bronx and she self-describes as a “democratic socialist.” No one thought she had a chance, but she crushed Crowley, 57.6% to 42.4%, a margin of nearly 3,600 votes. As much as I despise Crowley, this is far worse. It looks like the Dems are fully embracing the Marxists and aren’t afraid to run with it now.

Crowley was in his 10th term and was the chair of the House Democratic Caucus. He was ranked 4th in the caucus and was considered a possible future candidate for Speaker of the House to replace Nancy Pelosi. Crowley had not faced a primary challenge in 14 years. He just got handed his hat by a young Latino woman. He is now the first casualty of the so-called “Resistance,” but even worse… this is the first DSAer to have a real shot at sitting in Congress. Perhaps New York should have taken Trevor Loudon seriously on this.

Politico stated that Ocasio-Cortez “challenged Crowley on ideological and racial grounds.” She made the argument that the district needed a more left-wing representative, as well as someone who reflected the “majority-minority” demographic of the area, which has become increasingly Latino. That hit a chord with her liberal districts. They say she is a shoo-in to become the youngest woman ever elected to Congress in November. That should scare the crap out of Americans.

Ocasio-Cortez is not shy in her views. She’s a devout follower of socialist Bernie Sanders. Her platform promises the abolishment of ICE and the nationalization of healthcare using a single payer system. She promises to impeach President Trump as well. Other planks include Medicare for all, a universal jobs guarantee, no tuition for education at schools or universities, paid family and sick leave, housing as a human right, ending the war on drugs, demilitarization of the police, doing away with prisons, open borders and decriminalization for illegal aliens, an infrastructure overhaul using green energy, ending corporate donations in politics and a peaceful economy (whatever the heck that means). Her campaign even adopted the zombie-like “mic check” first seen at radical Occupy Wall Street protests in 2011.

“These results are also a shot across the bow of the Democratic establishment in Washington: a young, diverse, and boldly progressive Resistance Movement isn’t waiting to be anointed by the powers that be,” said Matt Blizek, of MoveOn. Ocasio-Cortez ran a low-budget campaign and was outspent by an 18-1 margin, but won the endorsement of some influential groups on the party’s far left, including MoveOn.

Just before the New York primary, Ocasio-Cortez traveled to McAllen, Texas to join left-wing protests against President Trump’s immigration policies. She organized a large volunteer contingent to canvas her district while she was away. Like Obama, she is an expert organizer. Most communists are. She claims that ICE is running ‘black sites’ on the border where human-rights abuses occur. That’s a blatant lie.

In an interview with The Intercept's @ggreenwald, @Ocasio2018 compared the violent Hamas protesters on Gaza border to the Ferguson protesters or teachers on strike https://t.co/ZeTVJ9bW2M https://t.co/C9ZPACjdzt

She’s also an anti-Semite. Ocasio-Cortez called Israel’s response to violent Hamas “protests” at the Gaza border a “massacre.” She also went after Crowley for his alleged support for the transfer of the U.S. embassy in Israel from Tel Aviv to Jerusalem. Above is an interview with left-wing journalist Glenn Greenwald of The Intercept published on June 12. According to The Washington Free Beacon, “Ocasio-Cortez called the riots orchestrated by Hamas “political expression.” Greenwald claimed Israel had shot “more than 1,000 peaceful, unarmed protesters in Gaza” as he formulated his question and read out a tweet quoting Ocasio-Cortez calling the violence a “massacre” perpetrated by the Israelis.”

Celebrities love Ocasio-Cortez. Susan Sarandon came out for her… she’s always been a big Bernie Sanders supporter. Her campaign ads were slick, sharp, innovative and eye-catching propagnada. And she drew on widespread grassroots frustration with the Democratic Party establishment. Ocasio-Cortez will face Republican Anthony Pappas, an economics professor, in November. Let’s hope and pray he wins. This is yet another sign of the Democrats sliding to the extreme left of the spectrum. MSNBC’s “Morning Joe” slobbered all over the young Marxist.

“Have you had a chance to take it all in, and how are you feeling?” Mika Brzezinski asked Ocasio-Cortez. “You know, it feels great,” she responded. “It felt great even before the results came in, walking around the community, seeing how many people were excited to vote yesterday was incredible. And I think we’re just kind of still processing with the rest of the nation right now.” Brzezinski also claimed that Ocasio-Cortez has the “clearest message” that she’s heard from a Democrat while Joe Scarborough fawned over her “hard work” knocking on doors to win the election.

Alexandria Ocasio-Cortez is a member of America's largest Marxist organization, the Democratic Socialists of America. She just won the NY Primary posing as a democrat. #NY14

Alexandria Ocasio-Cortez is proud of her heritage… but she prefers to be called the gender-neutral pronoun “Latinx.” “Latinx,” as HuffPost explained in 2016, is the new, progressive way to refer to people of Latin American descent, replacing the traditional -o or -a for male or female, respectively.” She strikes me as racist in her extremes and certainly uber radical. She is very dangerous and could sweep away any remaining somewhat sane politicians in the Democrat Party. If she wins, she will herald in a whole new raft of young progressive communists who will follow in her wake. 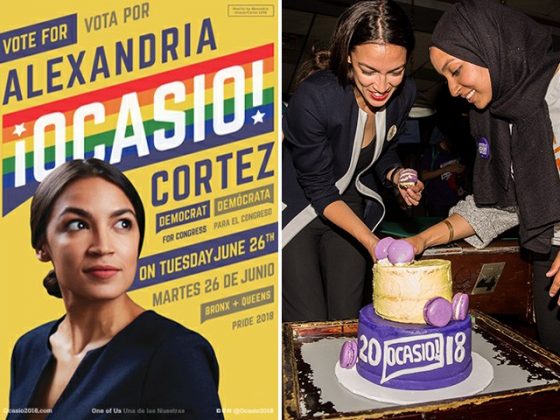 Left: a campaign poster for Ocasio-Cortez. Right: Ocasio-Cortez celebrates with supporters at a victory party in the Bronx. (Scott Heins/Getty Images)

The video of Alexandria Ocasio-Cortez realizing she won is my favorite thing in the whole world https://t.co/CJuc5DnlLA (via @NY1) pic.twitter.com/Dhlb05H3vo

This was @Ocasio2018's platform, taken from her office in Elmhurst, Queens —> pic.twitter.com/w9KqwRl00x

It’s time we say it: New York politics has an enormous misogyny problem. It has far-reaching consequences.

In NYC our Governor, Mayor, Council Speaker, and Queens Dem Boss are all powerful white men.

That’s not an accident. It’s a culture. #MeToo https://t.co/TB7f6BKNKC

ICE is operating exactly as designed when it rips screaming children from parents. That’s exactly why we must abolish it.

We MUST have the moral and political courage to #abolishICE.

Weak half-measures do nothing. This is a defining moment of our time – the time to act is now. pic.twitter.com/0viiQ4qdz8

In order for me to go to the border 2 days before the primary, our whole movement nationwide had to come together & hold it down in New York City.

They did.@DFAaction, @justicedems & @BrandNew535 all sent staff to manage canvasses.

This is a massacre.

I hope my peers have the moral courage to call it such.

No state or entity is absolved of mass shootings of protesters. There is no justification. Palestinian people deserve basic human dignity, as anyone else.

Democrats can’t be silent about this anymore. https://t.co/wJGATOtDsR

In a bizarre twist, Rep. Crowley sent a woman with slight resemblance to me as his official surrogate to last night’s debate.@repjoecrowley’s surrogate said he is in full support of Trump’s embassy change in Israel last month (where 60 people died).

The community was in shock. https://t.co/LvNj0rlhFw

Most of us don't know what percentage we are of what. We are generations upon generations Latinx. /3

In the question of "Race," Latinx identity is 'irrelevant.' But that excludes hundreds of millions of people + reinforces old paradigms. /8

This month I’d like to celebrate some Afro-Latinx ICONS.

What better way to start than with the inimitable Celia Cruz?

Nuestra Reina de Salsa (Queen of Salsa), Celia wrote the soundtrack to my childhood and pretty much all of Latin America. pic.twitter.com/GGpmMYfHtg

.@TimKaine & @DougJones, you both should be ashamed of yourselves.

You each campaigned on the backs of Latinx & African American voters. Now you’re COSPONSORING legislation that makes redlining (a major element of poverty in these communities) easier for Big Banks?

The Latino community is an electoral sleeping giant in the US.

Both parties have tried for years to capture Latinx turnout, but neither has delivered on critical issues like the DREAM Act or protecting Puerto Rico from Wall St & the PROMESA Act.

We conveniently forget that large, massive swaths of the United States used to be Mexico.

Latinx people are baked into the land of the Americas and the United States.

We are a product of indigenous peoples, who have been displaced and fleeing violence for most modern history.

11 thoughts on “Democratic Socialists Of America’s Alexandria Ocasio-Cortez: The Communist Millennial Face Of The Democrat Party”