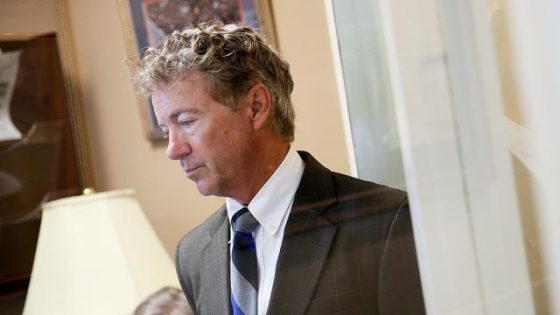 Senator Rand Paul (R-KY) has had a really, really rough year. First, he’s at a baseball practice where a Democratic terrorist named James Hodgkinson tried to kill a bunch of Freedom Caucus Republicans. Then, he’s personally attacked by his Democrat neighbor, Rene Boucher, who claimed it was over gardening issues involving tree limbs. Never did buy that and the guy got only a slap on the wrist for it too – a thirty-day sentence. But that’s being appealed to get him more time behind bars if possible. Paul got several broken ribs, broken teeth and a punctured lung that led to pneumonia.

He revealed today at an event in Litchfield, Kentucky, that some unhinged nutcase threatened to kill him and chop up his family with an ax. The guy that threatened Paul and his family was just arrested by police after a warrant was issued.

The Courier Journal reports that the man was taken into custody after he allegedly called in the threats to Paul’s Bowling Green office. “Capitol Police have issued an arrest warrant, this man had threatened to kill me and chop up my family with an ax,” Paul said while speaking to WHAS11 News’ Chris Williams. “It’s just horrendous that we have to deal with things like this.”

Thank you to the US Capitol Police for their arrest of the man who recently threatened to kill my family and me.

And it’s getting worse by the day. I suggest that Rand Paul get a security detail for his family and himself. “That on top of being attacked personally and having a very serious life-threatening attack on my person and then being shot at, I’ve had a year where it’s becoming more and more aware of we have these real threats out there,” Paul continued.

There are loony people on both sides, but there seems to be an inordinate amount of violent mental cases on the left these days. Marxism is driving them mad. This is just horrible and terrifying for Paul’s family. He’s right… this has got to stop. “Thank you to the US Capitol Police for their arrest of the man who recently threatened to kill my family and me,” Paul tweeted. The man was taken into custody in California… shocker there. He was identified by WBKO as Nathaniel Blane Huffman, who was arrested in Berkeley, California. He is originally from Murray, according to WBKO. Huffman is known to the Capitol Police for making aggressive statements to Senate Majority Leader Mitch McConnell and others.

Huffman had not been in Kentucky for many months, but he felt the need to threaten Rand Paul and his family, so he called his office. Not very smart and I am thrilled he’s in custody. The left is going to keep this up until someone gets killed. Then this whole political powder keg will blow sky high. That’s what they want evidently. Chaos in the streets just like in Portland, Oregon last weekend with Antifa.

I am glad that Rand Paul and his family are now safe from this guy. It’s the violent ones we don’t know about that worry me and they are all leftist radicals of one flavor or another.

Man allegedly threatens to chop up Rand Paul and his family with an ax https://t.co/5Pr9h6hvSX pic.twitter.com/eWZcOh3NeN

Sen Rand Paul describes threat from man who he says claimed he would chop up the senator’s family w/ an axe. @RandPaul describes his thoughts w/ this happening months after being attacked in his yard & the baseball practice shooting. @WHAS11 pic.twitter.com/xx581BlFj7

First he was shot at, ribs bashed in, and now another man threatening to kill Rand and his family.

This needs to stop. https://t.co/VRdHwr8usy

2 thoughts on “Man Threatened To Chop Up Rand Paul And His Family With An Ax: ‘This needs to STOP!’”