The U.S. Navy and allies are drilling in the Pacific Ocean as part of the massive Rim of the Pacific naval exercise. After years continuing to sail alongside China in RIMPAC, even as the peer competitor militarized man-made islands in the South China Sea, the U.S. decided enough is enough and rescinded the invitation. (Andrew Jarocki/Staff)

Twenty-six nations, 47 surface ships, five submarines, 18 national land forces, and more than 200 aircraft and 25,000 personnel will participate in the biennial Rim of the Pacific (RIMPAC) exercise scheduled June 27 to Aug. 2, in and around the Hawaiian Islands and Southern California. As the world’s largest international maritime exercise, RIMPAC provides a unique training opportunity designed to foster and sustain cooperative relationships that are critical to ensuring the safety of sea lanes and security on the world’s interconnected oceans. RIMPAC 2018 is the 26th exercise in the series that began in 1971. The theme of RIMPAC 2018 is “Capable, Adaptive, Partners.” Participating nations and forces will exercise a wide range of capabilities and demonstrate the inherent flexibility of maritime forces. These capabilities range from disaster relief and maritime security operations to sea control and complex warfighting. The relevant, realistic training program includes amphibious operations, gunnery, missile, anti-submarine and air defense exercises, as well as counter-piracy operations, mine clearance operations, explosive ordnance disposal, and diving and salvage operations. This year’s exercise includes forces from Australia, Brazil, Brunei, Canada, Chile, Colombia, France, Germany, India, Indonesia, Israel, Japan, Malaysia, Mexico, Netherlands, New Zealand, Peru, the Republic of Korea, the Republic of the Philippines, Singapore, Sri Lanka, Thailand, Tonga, the United Kingdom, the United States and Vietnam. This is the first time Brazil, Israel, Sri Lanka and Vietnam are participating in RIMPAC. Additional firsts include New Zealand serving as sea combat commander and Chile serving as combined force maritime component commander. This is the first time a non-founding RIMPAC nation (Chile) will hold a component commander leadership position. This year will also feature live firing of a Long Range Anti-Ship Missile (LRASM) from a U.S. Air Force aircraft, surface to ship missiles by the Japan Ground Self-Defense Force, and a Naval Strike Missile (NSM) from a launcher on the back of a Palletized Load System (PLS) by the U.S. Army. This marks the first time a land based unit will participate in the live fire event during RIMPAC. RIMPAC 18 will also include international band engagements and highlight fleet innovation during an Innovation Fair. Additionally, for the first time since RIMPAC 2002, U.S. 3rd Fleet’s Command Center will relocate from San Diego to Pearl Harbor to support command and control of all 3rd Fleet forces in 3rd Fleet’s area of responsibility to include forces operating forward in the Western Pacific. The Fleet Command Center will be established at a deployable joint command and control on Hospital Point for the first part of the exercise and then transition to USS Portland (LPD 27) for the remainder of the exercise. Hosted by Commander, U.S. Pacific Fleet, RIMPAC 2018 will be led by Commander, U.S. 3rd Fleet, Vice Adm. John D. Alexander, who will serve as combined task force (CTF) commander. Royal Canadian Navy Rear Adm. Bob Auchterlonie will serve as CTF deputy commander, and Japan Maritime Self-Defense Force Rear Adm. Hideyuki Oban as CTF vice commander. Fleet Marine Force will be led by U.S. Marine Corps Brig. Gen. Mark Hashimoto. Other key leaders of the multinational force will include Commodore Pablo Niemann of Armada de Chile, who will command the maritime component, and Air Commodore Craig Heap of the Royal Australian Air Force, who will command the air component. This robust constellation of allies and partners support sustained and favorable regional balances of power that safeguard security, prosperity and the free and open international order. RIMPAC 2018 contributes to the increased lethality, resiliency and agility needed by the joint and combined force to deter and defeat aggression by major powers across all domains and levels of conflict.

The location of the garrison, confirmed through satellite imagery here, can possibly support a brigade-sized intercontinental ballistic missile formation.

New Delhi: China has built a new garrison in its central Sichuan province for its intercontinental ballistic missiles (ICBM) which have the capacity to cover all of India, the Indian Ocean Region as well as large parts of continental America.

On 27 May, the 10th test of the Dongfeng-41 or DF-41 (East Wind-41) ICBM, with a reported range of 12,000-15,000 km, was conducted at the Taiyuan Space Launch Center in Shanxi province. China’s PLARF, or the People’s Liberation Army Rocket Force, formerly Second Artillery Corps (SAC), claimed it a success. 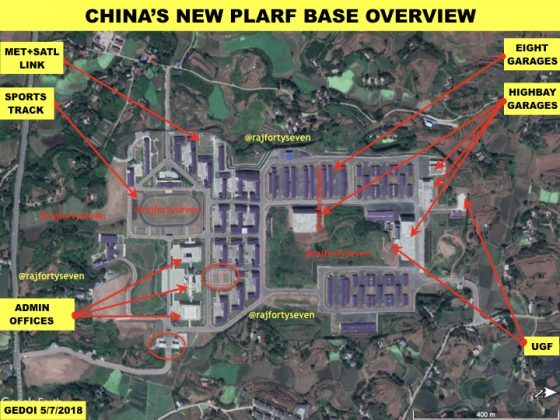 ThePrint has now identified a never-before revealed PLARF location, which may possibly be a DF-41 garrison, with the help of satellite imagery.

ThePrint had in April reported that PLARF had built a garrison in the southernmost Hainan province to store DF-31AG missile.

This is the first time that the new Chinese garrison has been confirmed through satellite imagery (as of 7 May, 2018), although it has been covered by ground human intelligence before.

It is located 15 km east of Yibin town in Sichuan province, away from towns and cities but close to a highway to enable quick deployment. Construction is said to have begun three years ago.

The ICBM is likely to be armed with 10 multiple independently targetable re-entry vehicle (MIRV) warheads each with 150kT yield. 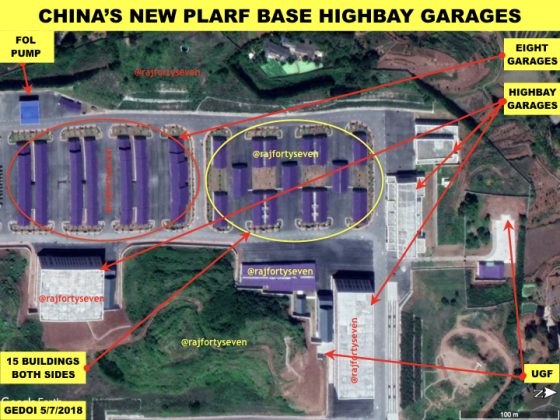 This new garrison is typically built around a sports track with a football field in it. It also has two basketball grounds and an obstacle course adjoining the sports track.

There are two locations where dugouts are observed. These could possibly be underground DES igloos. 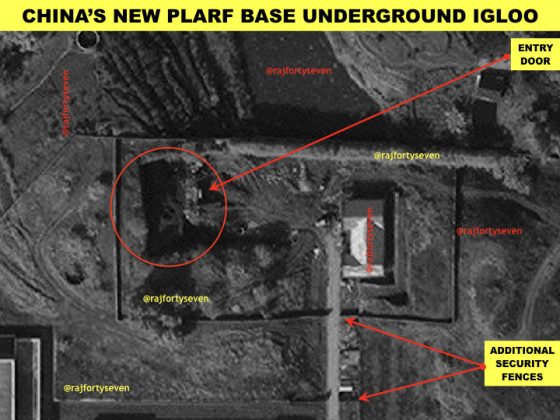 There are about 15 triple storied C-shaped barracks, possibly for troops’ living accommodations.

Three large multi-storey buildings connected with each other could be administrative offices. A meteorological station with possible satellite link is also seen to the west side of the complex.

All buildings except central administrative buildings and high-bay garages are provided with slanted box gable roofs. 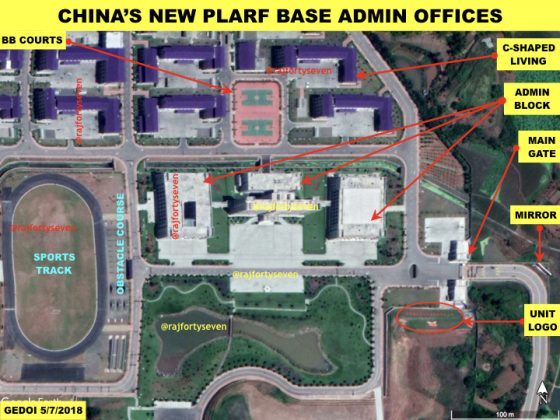 The entire garrison with its support buildings has a very high-walled security with four entrances. The main entrance is heavily guarded with around 200m approach under visual observation with the help of a large convex mirror.

It has typical layout of eight garages with six of them being interconnected. There are 30 smaller buildings (15 on either side of highbay garages) with different dimensions which are difficult to assess.

In the latest satellite image, a large tractor trailer of 22m is seen plying on the highway 400 metre south of the complex, suggesting that DF-41 truck erector launcher (TEL) of similar size can easily manoeuvre in this area.

The DF-41 vehicle has most advanced technologies incorporated for the smooth ride of the missile. It is an eight-axle, 16-wheeled TEL with possibly a six-axle drive.

The steering mechanism of DF-41 TEL is very uniquely purposed to provide high-speed turning stability and smallest possible turning radius to the behemoth.

As for the 27 May ICBM test from the Taiyuan Space Launch Centre, it was first reported by Washington Free Beacon quoting Pentagon spokesman Marine Corps Lt. Col. Christopher Logan who said, “The US was aware of recent flight tests and we continue to monitor weapons development in China.”

The well-known defence magazine IHS Jane’s Defence Weekly claimed that after the latest launch, DF-41 had moved closer to commissioning and deployment. Chinese experts claim that DF-41 is the most advanced ICBM in the world.