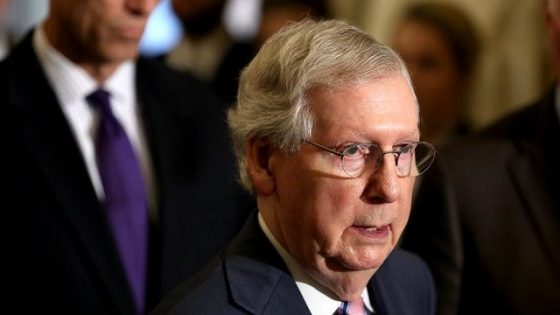 Well, well, well… uber-RINO Senate Majority Leader Mitch McConnell (R-KY) may not be a total waste after all. He may be playing footsies with Chinese communists, but he seems to have grown a spine when it comes to American socialists. Who knew? McConnell said yesterday that he will not be intimidated by protesters who confront him calling for the abolition of U.S. Immigration and Customs Enforcement. He’s been harassed at two restaurants in Kentucky and at least one event in Washington, D.C.

As he was leaving one establishment in Kentucky last weekend, a demonstrator shouted “Abolish ICE!” at him and the protesters surrounded McConnell like a bunch of jackals. He was also confronted as well at Georgetown, where his tiny little wife, Elaine Chao, let the attackers have it good. These are Mexican Marxists and members of Democratic Socialists of America (i.e. communists) who are hassling other Republicans over the Trump administration’s immigration policies. A number of high profile Democrats have called for abolishing ICE, including the newest and loudest millennial socialist voice… Alexandria Ocasio-Cortez from New York. McConnell dismissed their demands for “open borders” and said it is worrisome that some Democratic senators would entertain the notion. It’s predictable as the day is long senator.

“Let’s understand what they are suggesting here: Getting rid of ICE, the Immigration and Customs Enforcement, and having no one at all patrol the borders,” he said at a press conference. “What I worry about is that that point of view seems to be moving into the United States Senate.” It isn’t ‘moving into’ the Senate, it’s already there. McConnell went on to name Sens. Kirsten Gillibrand (D-NY), Elizabeth Warren (D-MA) and Kamala Harris (D-CA) as “credible Democratic United States senators” taking this line. Somebody’s earned a cookie.

I see what they did here. They waited until Elaine wasn’t around. -MM #dontleavehomewithouther https://t.co/tfjLu0IRok

Gillibrand and Warren have been screeching at the top of their harpy lungs that ICE needs to be disbanded, going so far as to call it a terrorist organization. Harris has wobbled on the issue, stating recently that ICE’s role must be “reexamined.” Trust me, she’ll toe the socialist line and go on record to abolish ICE and soon. It’s in her Marxist political nature.

McConnell is adamant that he will not be intimidated by these people. “I’m not sure what about my career has led them to believe that I am easily intimidated. … This is all about intimidation. It’s not about persuasion but about intimidation. And I assure you I will not be intimidated by these groups of socialists who apparently prefer open borders,” McConnell told reporters in Kentucky. Ah, he said the ‘S’ word. Finally! “Honestly, I enjoyed my lunch,” McConnell added, referring to Saturday’s incident. “I’m just sorry that other people at the restaurant seemed to be inconvenienced by all of this.” Buckle up people, because a whole bunch of Americans are about to be ‘inconvenienced’ by all this.

Erick Erickson is now asking when the shooting will begin. I wonder that too:

Progressives once claimed Republicans were racist. Now they claim Republicans are racist killers who need to be stopped. According to Democrats, Republicans attempted to kill people through passing tax cuts, repealing Obama era net neutrality regulations, merely considering the repeal of Obamacare and now by the president nominating Brett Kavanaugh to the Supreme Court.

We are already at a point where progressive protestors are showing up at the homes of Trump administration employees. White House staff, members of Congress, Fox News personalities and other notable conservatives are getting harassed and thrown out of restaurants. A random 16-year-old in San Antonio, TX was assaulted in a restaurant last week for wearing a “Make America Great Again” cap.

Democrats are increasingly vocal about the idea that they think Republicans in Congress are doing Russia’s bidding. They view Donald Trump as an authoritarian figure waiting for just the right moment to suspend elections and impose a dictatorship. Hollywood Director Josh Whedon declared merely considering Kavanaugh’s nomination would create the first American dictatorship.

On Independence Day, “The First Purge” came out in theaters. The movie posits that the National Rifle Association backed a coup that put a dictatorship in power in the United States. Democrats consider the group a terrorist organization that Republicans show fealty to. They also believe Immigration and Customs Enforcement is a terrorist organization that should be abolished. (emphasis added by me)

At this rate, it is only a matter of time until the left takes this to the next level. Then all hell will break loose. McConnell vowed just today that Brett Kavanaugh would be confirmed to the Supreme Court by October 1st. Will that be the tipping point? I guess we’ll see.

McConnell made no bones about letting the protesters know that he would not fear them or worry about what they will do. He tweeted out a threat of sorts earlier this week that he would make sure his wife is with him next time. She is a pit bull and savaged the last morons that attacked Mitch. It was impressive… savagely awesome in fact. His wife, Elaine Chao, is the secretary of transportation. She literally had to be held back by security as immigration protesters were shouting at McConnell and she snarled at them, “You leave my husband alone!”

Many of the Democrats pushing to abolish ICE are craven cowards. Three of the House Democrats who put forth a bill to abolish ICE said they will not even vote for it, accusing House Speaker Paul Ryan (R-WI) of pulling a “political stunt” by allowing the bill to be voted on. It would not surprise me if Ocasio-Cortez smacked them up alongside the head for folding like that. Meanwhile, dozens of GOP senators, including McConnell, are backing a resolution that offers support for ICE and dismisses calls to nix the agency as “an insult to the heroic law enforcement officers of ICE.” Good for them… it’s about time they grew a set.