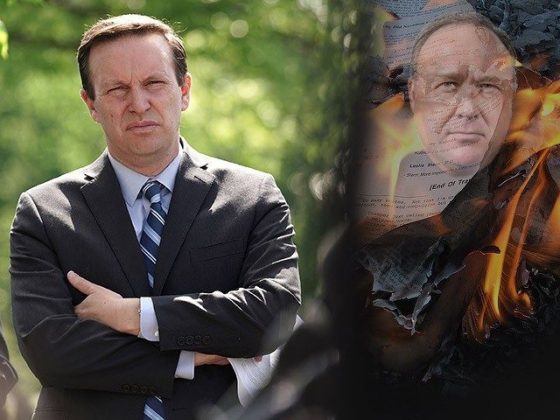 I’m not a fan of Alex Jones, never have been. But what is happening to him is nothing less than coordinated censorship and it should alarm every person out there on social media. It is true that the tech giants are private companies and can do as they see fit, but yesterday’s banning of InfoWars was a coordinated hit. Virtually all social media except for a very few banned Jones. I am a First Amendment proponent and the language you hate the most is the language that should be most protected. Yesterday’s shunning of Alex Jones was an attempt to make him non-existent… to shun him into silence. That will backfire I imagine as it will only make InfoWars more popular. I heard he moved his social networking to Gab after all this.

Immediately after InfoWars was banned, Media Matters started calling for all climate change deniers to be banned as well. Senator Chris Murphy (D-CT) is also saying that “InfoWars is just the tip of a giant iceberg.” Facebook, YouTube, Apple, Pinterest, Google, and Spotify are among those who banned Jones and InfoWars.

As The Daily Wire points out, Murphy has a problem with the First Amendment: “I know Facebook and Apple and YouTube have gotten so big they sometimes seem like the government. But they aren’t. They are private companies that shouldn’t knowingly spread lies and hate. They took a good first step today by removing Infowars.” Followed by: “Infowars is the tip of a giant iceberg of hate and lies that use sites like Facebook and YouTube to tear our nation apart. These companies must do more than take down one website. The survival of our democracy depends on it.” Except this isn’t a democracy, you dolt… it’s a republic.

They are private companies that shouldn’t knowingly spread lies and hate. They took a good first step today by removing Infowars.

More from The Daily Wire: “Apple removed five out of six of Jones’ podcast streams, including The Alex Jones Show. Facebook and Google did the same, with Facebook dumping four pages controlled by Jones, and Google removing the Alex Jones Channel.”

Murphy has been calling for something like this for some time. In 2013, Murphy and Senator Jon Tester (D-MT) proposed a constitutional amendment to restrict free speech. As UCLA professor Eugene Volokh noted at the time:

The proposed amendment would authorize Congress, states, and local governments to, for instance, (1) restrict what most newspapers publish, (2) restrict what most advocacy groups, such as the ACLU, the Sierra Club, and the NRA, say, (3) restrict what is said and done by most churches, and (4) seize the property of corporations without just compensation. (It might also allow restrictions on the speech of unions, depending on whether they are seen as “corporate entities.”)

That’s not the America I recognize and love. It is a Democratic fascist utopia. Murphy also hates the Second Amendment: “I support the real 2nd Amendment, not the imaginary 2nd Amendment. And the real #2A isn’t absolute. It allows Congress to wake up to reality and ban these assault rifles that are designed for one purpose only – to kill as many people as fast as possible.” This guy wants to basically do away with the Constitution and the Bill of Rights and rewrite them communist-style.

Infowars is the tip of a giant iceberg of hate and lies that uses sites like Facebook and YouTube to tear our nation apart. These companies must do more than take down one website. The survival of our democracy depends on it.

Murphy’s website is enlightening. He backs “universal background checks, cracking down on straw purchasers and illegal weapon sales, and limiting access to high-capacity magazines and military-style assault weapons.” He wants to pass “legislation to close loopholes in our background check system; to make it illegal for those on the FBI terror watch list to buy a gun; to end the ban on gun violence research at the Center for Disease Control; to encourage licensing requirements for handgun purchases; and to help keep guns out of the hands of domestic abusers.” In other words, he’s anti-Second Amendment and anti-First Amendment. Without those as they are now, you can kiss our freedoms goodbye.

Alex Jones and InfoWars are accused of violating ‘hate speech’ policies, but those determining exactly what those policies are, seem to be liberal fascists and Marxists. By Murphy’s own words, they plan on coming after a bunch more conservatives out there. This is every dystopian nightmare in regards to freedom rolled into one and the left is announcing their intention to shut us up for good once and for all. This is why the left must not be allowed to gain control over the U.S. again or we are through as a constitutional republic.

Earlier this year, Twitter announced it would start using an algorithm to crack down on “hate speech.” One of the key components of the algorithm would collapse abusive or potentially “low quality” tweets by detecting certain phrases and patterns. The algorithm would also tweak search results, to downgrade abusive tweets.

So far it appears that the new algorithm may be targeting conservatives. On Sunday, conservative commentator Candace Owens temporarily had her account suspended. Twitter later restored her account, claiming that it was an “error.” Last month, Vice News reported that several prominent Republican officials were not being featured in Twitter search results. This tactic has been referred to as “shadow banning.”

Twitter’s new algorithm has many conservatives leery where this may be going — their concern? Who gets to determine what constitutes hate speech?

And the real #2A isn’t absolute. It allows Congress to wake up to reality and ban these assault rifles that are designed for one purpose only – to kill as many people as fast as possible.

Murphy is calling for social media hit squads to take out conservatives who speak out of turn. ‘1984’ anyone? Improper thoughts and speech will not be tolerated and will be punished per those in control, which is pretty much the tech giants these days. Senator Murphy should have to answer exactly which websites he is referring to here. As Breitbart correctly put it: “In more ways than one way Alex Jones and InfoWars are the canary in the coalmine of free speech.”

I find it interesting that Antifa and Louis Farrakhan are still up on social media, but InfoWars is banned. I am for free speech period. It doesn’t matter what I or anyone else thinks of Alex Jones, he should have the right to have his voice heard. These may be private companies, but they are acting in concert to silence someone they don’t like. First, they came for InfoWars.

I think Brit Nigel Farage is on to something:

The most avowed First Amendment, free speech defenders must surely be on the side of those — like me — who believe it is not within the gift of corporations to decide what is acceptable speech or not, especially when they harvest and sell data about all of us en masse as the underlying business model.

This is no longer up to them. It is up to us. Are we going to stand idly by as friends, allies, or even political enemies have their speech curtailed or their lives threatened by these modern publishers? Or are we going to demand that they can only have it one way or another?

That they cannot profess to be neutral, open platforms while being illiberal, dictatorial, and hiding behind the visage of a private corporation (which are more often than not in bed with governments around the world at the very highest levels).

This isn’t “liberal democracy” as they keep pretending.

That’s why I believe we urgently need to prosecute this issue in the public square and campaign for a social media bill of rights in our respective countries. And for those that don’t take issue with the latest censorship of right-wingers by big social media — unless we take a stand now, who knows where it could end.

Conservatives need to stand up now before it is too late. As Benjamin Franklin stated: “We must all hang together, or assuredly we shall all hang separately.” That pretty much says it all concerning social media and having our voices silenced forever by leftists.

4 thoughts on “Democratic Senator Chris Murphy: ‘InfoWars Is Just The Tip Of A Giant Iceberg’”