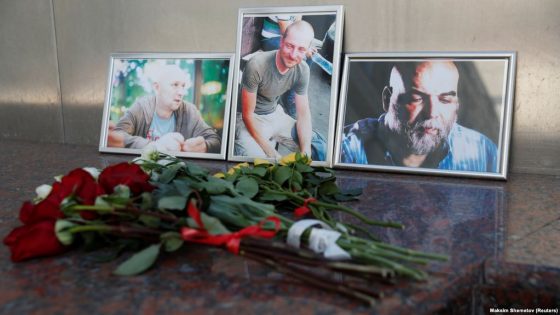 Photographs of journalists Orkhan Dzhemal (right), Kirill Radchenko (center) and Aleksandr Rastorguyev are seen at a small memorial to the slain jounalists outside the Central House of Journalists in Moscow.

Rather interesting that fellow journalists are not outraged and there is not full reporting on these murders. Jim Acosta? April Ryan? CNN? (snarky)

Mikhail Khodorkovsky, a Russian exile and Putin foe has a news organization called Investigation Control Center. Three investigative journalists were dispatched to (CAR) Central African Republic to determine why a Putin-connected militant group named Wagner is operating there. Sadly, it did not end well.

On the 31st of July news broke about the murder of the Russian journalists Orkhan Djemal, Alexander Rastorguev and Kirril Radchenko. They were working in the Rental African Republic on a joint project with Mikhail Khodorkovsky’s Investigation Control Center. In particular, they intended to visit the grounds of Berengo estate, where, it is alleged, the base of the mercenaries of the private military organization “Wenger” is situated.

The journalists arrived in Bangi, the capital of CAR, on Saturday. The next day they went to Berengo’s estate. However, they were denied access, requiring accreditation from CAR’s Ministry of Defense. Their details were noted down and they were promised that they would be given a pass after five days.

On Monday the group had to meet the fixer (a journalism consultant) from a UN delegation called Martin (he was the one who recommended the driver to the journalists). The journey ought to have taken about a day and a half because of roadblocks and poor-quality roads.

On Sunday evening the journalists were ambushed and shot in their vehicle at around 22:00 local time.

French media reported that the murders were motivated by theft – the journalists were carrying roughly 9,000 dollars and their equipment. Mikhail Khodorkovsky has promised to help find and identify the journalists’ killers.

Russian investigators said they have opened a criminal case to look into the deaths of the journalists. Russian Foreign Ministry spokeswoman Maria Zakharova said on August 1 that the stated purpose of their visit to the CAR was tourism, seeming to take them to task for allegedly misstating the intent of the trip.

That remark drew rare criticism of the ministry from a senior pro-Kremlin lawmaker. Leonid Slutsky, chairman of the Foreign Affairs Committee in the State Duma, the lower house of parliament, wrote on Telegram that issues such as the purpose of the trip were “not very important now.”

“What is important is that Russian citizens have been killed,” he wrote. “Here we should follow the example of our ‘strategic friends’ from across the ocean: the United States does not leave the death of any of its citizens without consequences. No matter what country they were in and what political views they adhered to.”

Henri Depele, the mayor of the town of Sibut, around 200 kilometers northeast of the capital, Bangui, said the journalists were killed late on July 30. Their driver survived the attack.

The investigative media outlet the journalists worked for is financed by Mikhail Khodorkovsky, a former oil tycoon who spent 10 years in prison following convictions in financial-crimes trials supporters contend were a Kremlin-orchestrated campaign to seize his company’s production assets and punish him for challenges to President Vladimir Putin.

He was pardoned by Putin, released, and flown out of Russia in 2010, and now lives in Europe, where he is one of Putin’s most vehement critics.

TsUR has published a number of investigations alleging corruption by senior members of Putin’s entourage.

Khodorkovsky called the three journalists who were killed “brave men who were not prepared simply to collect documentary material, but wanted to ‘feel’ it in the palms of their hands…. Rest in peace.”

Dzhemal, 51, was a respected Russian military correspondent who covered conflicts around the world. He was seriously injured in Libya in 2011 and published a book in 2008 giving a firsthand account of the five-day Russia-Georgia war.

Rastorguyev, 47, was a prominent documentary filmmaker and a contributor to RFE/RL. He was among the three directors of an award-winning 2013 film about leaders of the Russian opposition.

Radchenko, 33, started his career as a projectionist but had become a cameraman in recent years. He served as an election observer in Chechnya in March.

The Central African Republic has been riddled by violence, often fought along religious lines between predominantly Christian and Muslim militias, since a 2013 rebellion overthrew then-President Francois Bozize.

Most of the country is beyond the control of the Bangui government, and a 12,000-strong UN peacekeeping mission has struggled to keep a lid on the violence.