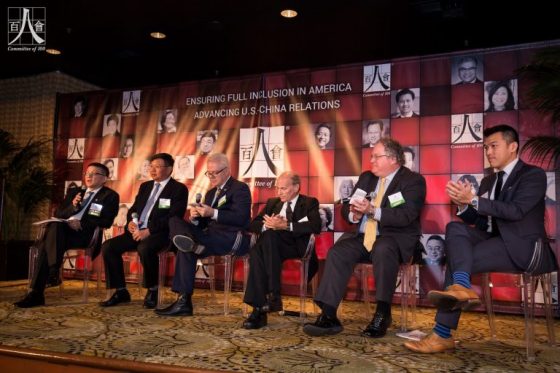 On May 7, 2010, “a good friend of the Committee of 100,” C.H. Tung, vice chairman of the Chinese People’s Consultative Conference — a “united front organization under the leadership of the Communist Party of China” — met with New York C-100 members to discuss U.S.–China relations. During his visit to the United States, Tung spoke to the Carnegie Endowment for International Peace about the importance of mutual understanding and trust. Tung’s China–U.S. Exchange Foundation was then formed with C-100 help to “support activities furthering such understanding.”

Former U.S. Secretary of State Henry Kissinger, who opened U.S. relations with Mao’s China under President Richard Nixon, helped conceive the idea of the C-100 and encouraged co-founders I.M. Pei and Henry Tang to establish the organization in 1989.

“The Committee of 100 was conceived in 1989 by famed architect I.M. Pei to fill the need for an organization of influential Chinese Americans who could speak with a unified voice to decision-makers at the highest levels in both the U.S. and China.

“Uniting them was the desire to expand the participation of Chinese Americans in all aspects of American life and to foster better U.S.–China relations.”

Today, the C-100 roster has expanded to more than 190 members — all top performers in their fields, and all seemingly friendly to the existing regime in China.

Gordon H. Chang, director of the Center for East Asian Studies at Stanford University (not to be confused with CCP critic Gordon G. Chang) joined C-100 in 2015. In the 1970s and ‘80s, he was a leader of the Maoist I Wor Kuen and the League of Revolutionary Struggle.

C-100 board of directors member Stewart Kwoh is the founding president and executive director of the Asian Pacific American Legal Center in Los Angeles. For many years, he was close to members of the Communist Workers Party, which is pro-CCP/North Korea. In 2008, Stewart Kwoh organized a leadership trip to Beijing, Xi’an, and Shanghai for 12 national Latino leaders, which was briefed by C-100 members, both before departure and in China.

The current C-100 chairman is Frank H. Wu, chancellor and dean of the University of California’s Hastings College of the Law.

A very important mission for the C-100 is the protection of Chinese spies from investigation and prosecution.

A 2017 white paper, “Prosecuting Chinese Spies: An Empirical Analysis of the Economic Espionage Act,” published by C-100 claimed to provide “empirical indications that Asians in America may be facing unfair and increasing racial prejudice in the U.S. government’s campaign to crack down on theft of economic trade secrets.”

The white paper continues: “Recent prosecutions of innocent Chinese Americans have raised concerns that U.S. Department of Justice investigations of suspected espionage have been influenced by racial prejudice. ‘This study shows that there is enough evidence to be concerned,’ said C-100 Chairman Frank H. Wu. ‘The growing number of false accusations towards American citizens of Asian descent and the factual similarities among the situations show an apparent pattern and practice of selective and discriminatory treatment. It deserves rigorous monitoring.’”

The Chinese intelligence service goal is to deter investigation of Chinese nationals by authorities, by pre-emptively accusing the authorities of “racism,” then protecting those actually arrested by claiming that the charges spring from bias, rather than a response to real criminal behavior.

This is a Chinese intelligence influence operation, and C-100 is doing the CCP’s dirty work for them.

The CCP is also using C-100 to regain some of the propaganda ground lost under the Trump administration. Neutralizing or seducing Trump’s key allies is high on the Chinese agenda.

In October 2017, C-100 announced the launch of the “C100 U.S.–China Fulbright Fund” in Washington. The $1 million fund was “initiated by Committee of 100 members” and would “operate under the government’s bi-national Fulbright program to expand U.S.–China educational exchanges.”

“We are grateful to the Committee of 100 [for their pledge of] $1 million to launch a C100 U.S.–China Fulbright Fund,” DeVos said in her remarks. “I look forward to continuing to work together on these vital programs.”

Wu, the C100 chairman, added: “Committee of 100 is honored to partner and contribute to furthering our nation’s goals to advance exchanges with China under the Fulbright program. We are also grateful to Secretary Rex Tillerson, Secretary Elaine Chao, Secretary Betsy DeVos, Madame Premier Liu Yandong, and the impressive delegation from China for their leadership and participation in the U.S.–China Social and Cultural Dialogue.”

“As an organization dedicated to the betterment of U.S.–China relations,” Wu continued, “C100 views these exchanges as a critical backbone for long-term constructive engagement between the U.S. and China, not only expanding people-to-people ties and developing future generation bridge-builders, but also establishing a positive springboard for cooperative government-to-government dialogue to address the expanding plethora of strategic issues facing our two nations.”

Were these donations made out of the kindness of their hearts, or at the bidding of the CCP?

In China, the lines between business and politics are very blurred. The C-100 seems to operate in the same way.

The Committee of 100 works to further CCP social, economic, and political goals in the United States. Why is this permitted? Why are C-100 leaders not at least required to officially register as foreign agents?