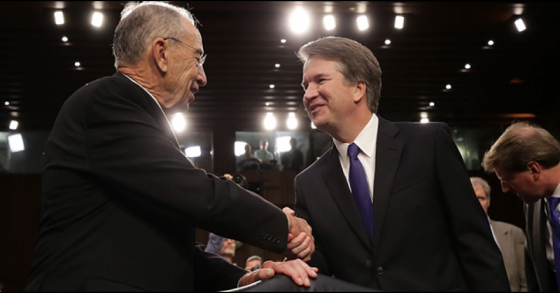 An FBI probe of Kavanaugh reinforces the false perception that the FBI can be trusted with personal data about Americans. What do they have on him? Sorry, but the report will stay secret.

Incredibly, based on their background investigations, one can argue that the FBI, which was used in the Foster cover-up, has the power to make or break this nominee.

Reflecting on his work on the Foster case and his discovery of the key witness, Evans-Pritchard said, “I had tracked down Mr. Knowlton and discovered that the Starr probe had never spoken to him, even though he had been the first person at the Fort Marcy death location and had highly-relevant information.” But an FBI interview had misrepresented what Knowlton told FBI agents. “Mr. Knowlton was stunned. It contradicted his express assertions. He said the FBI had tried repeatedly to badger him into changing his story on key facts. Each time he refused. Now it appeared they had written in what they wanted to hear. He agreed to go public and accused the FBI of falsifying his witness statement. This was to court trouble.”

After Knowlton received a subpoena signed by a young prosecutor in Starr’s office, Brett Kavanaugh, Knowlton “suffered two days of what appeared to be systematic intimidation by a large surveillance team,” Evans-Pritchard noted. “A deeply-shaken Mr. Knowlton contacted me from his home several times until his phone was cut off.”

Evans-Pritchard added that the systematic intimidation would be recognized by veteran intelligence agents as a “softening-up operation” to frighten Knowlton before his grand jury appearance and “smacked of police state behavior.”

Evans-Pritchard adds, “I informed Mr. Starr’s office that their grand jury witness was being intimidated. So did Mr. Knowlton’s lawyer, who asked for witness protection. Nothing was done. Mr. Kavanaugh brushed it off, saying the Telegraph was behind all this mischief in order to ‘sell newspapers.’ When Mr. Knowlton appeared at the grand jury – thinking he was doing his civic duty – he says he was subjected to two and a half hours of character assassination by Mr. Kavanaugh. There was little attempt to find out what he knew about the Foster death scene.”

The character assassination included efforts by Kavanaugh to portray Knowlton as a pervert.

While Knowlton and his lawyer John H. Clarke later filed a federal lawsuit against two FBI agents and others involved in the harassment campaign, it was dismissed by the courts. Similarly, a Freedom of Information Act lawsuit for the Foster crime scene photos was dismissed by the Supreme Court in a ruling delivered by Justice Anthony Kennedy. The photos could have helped prove that it was murder.

Because of what happened to Knowlton, the new Evans-Pritchard article, which appeared on Monday, concludes that Kavanaugh “lacks judicial character and is unfit to serve on the U.S. Supreme Court…” That’s an extraordinary verdict, and it’s an interesting development that we have to depend on a British journalist for this critical information. Of course, Knowlton and Foster researcher Hugh Turley had already submitted a letter and documents to the Senate Judiciary committee about the case.

The Evans-Pritchard article was featured on the Drudge Report, usually a reliable source of news and information for a conservative audience. But other major conservatives in the media carefully avoided it.

My own articles and videos about the case over the last several weeks have been censored by conservative websites usually anxious to publish my material. One prominent conservative leader told me in a note that I’ve “gone off the deep end.”

Instead, liberals have lined up against conservatives, and Democrats are fighting Republicans, in a sideshow that has all the earmarks of a dialectical maneuver designed to get our attention off the main issue – Kavanaugh’s debt to the Deep State. Kavanaugh replaced a prosecutor, Miguel Rodriguez, who was forced out after he had developed evidence of homicide.

There was a time when smoking marijuana was enough to force Judge Douglas H. Ginsburg to withdraw his name from the confirmation process. Today, a “conservative” nominee brags about his drinking habits, even to the shock and surprise of President Trump, and he vows to fight on. Kavanaugh clearly has some dedicated backers, most of them in the conservative legal establishment. Curiously, some of them come from the Never-Trump wing of the Republican Party.

In the current climate, for ordinary grass-roots conservatives, Kavanaugh has become “our guy,” as the liberal attacks have made him seem more conservative than he really is. It’s an understandable knee-jerk reaction.

Hence, investigative journalist Jim Simpson has written an article, The Kavanaugh Allegations Are Psychological Terrorism, And It’s Time They End, ripping the tactics of the Democrats. The Republicans are fighting back, claiming a “Brett Bounce” because Republicans are now energized about the midterm elections.

But if this partisanship allows us to escape a thorough examination of what happened to Grand Jury witness Patrick Knowlton, then we really don’t understand what justice and law are all about. Truth has become a secondary concern and corruption in the justice system continues to grind away at accountability, even at the highest levels of the judiciary.

The Foster case, which I have been working on for 25 years, represents what Evans-Pritchard calls “the electric third rail of U.S. politics.” So much time and energy are wasted on political posturing that enables these bipartisan cover-ups to continue.

Back in 2004, when I was working full-time for Accuracy in Media chairman Reed Irvine, I wrote about this problem in a column entitled, “Bipartisan Cover-Ups – From Vince Foster to Anthrax.” In the case of the post-9/11 anthrax attacks, the FBI kept scientist Stephen Hatfill, an innocent person, under 24-hour surveillance and followed him around Washington in a car, even running over his foot on one occasion. Eventually, FBI intimidation would lead to the death of another falsely accused U.S. government scientist, Dr. Bruce Ivins.

In another case, that of whistleblower Notra Trulock, who uncovered Chinese espionage at U.S. labs, the FBI botched the case and tried to smear Trulock. FBI agents came into Trulock’s townhouse, without a search warrant, and seized his computer. They were supposedly looking for classified information that Trulock had taken with him, but no charges were ever filed. The raid was part of the FBI smear campaign against him. Trulock, former Energy Department intelligence chief, was eventually forced out of the department for exposing the espionage problem.

In his provocative book, By the People: Rebuilding Liberty Without Permission, Charles Murray writes about our “Lawless Legal System,” which “increasingly functions in ways indistinguishable from lawlessness, for reasons that are authorized by judges and Congress.” Murray’s book, published in 2015, targets the growth of the federal government but I believe it is an accurate description of what happened in the Foster murder case and what is unfolding in the Kavanaugh confirmation process. We are losing sight of what matters most – liberty and accountability.

Too many journalists are eager to pick sides, in order to generate “clicks” or get an article “trending” on a particular website.  The truth is left behind.

For my part, I will continue to go off the deep end in search of the Deep State.

As I argued many months ago, putting “America First” cannot be done without purging the Deep State operatives who protected the Clintons and the networks that spawned the Obama presidency. Soviet/Russian moles in the CIA and FBI have included Aldrich Ames, Harold Nicholson, and Robert Hanssen. Attempts at internal reform of the FBI have been largely unsuccessful.

So here we are today, contemplating the fate of Brett Kavanaugh’s Supreme Court nomination, and everybody is wondering what is in a secret FBI report about his character. What about the character of the FBI, which employed anti-Trump operatives having an extramarital affair? What about the “rogue operations at the heart of the U.S. federal system?” Kavanaugh’s predecessor, Miguel Rodriguez, had called them the “ultimate power.”

Brett Kavanaugh understands some of these forces because he was right in the middle of their efforts to protect Deep State secrets. In some forum, he must be asked to explain why the harassment of Knowlton occurred and who ordered it. Until that is done, his career will forever be tainted.

In victory or defeat, the fight over his nomination will confirm the existence of what Charles Murray calls our “broken” constitution.  It’s broken because the people who have promised to obey and enforce it have been compromised, and our media have taken sides in a manner that leaves the Deep State untouched. The institutional corruption of the FBI must be addressed and fixed.

Muscling Kavanaugh into Kennedy’s seat on the Supreme Court doesn’t solve any of President Trump’s problems with the Deep State and may actually accelerate them. And the nominee, if confirmed, figures to disappoint Trump’s conservative backers with his rulings on social and cultural matters. But that will come later.