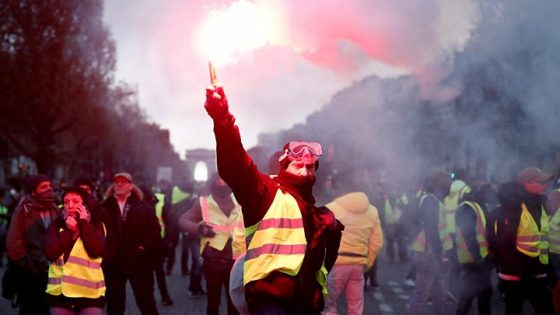 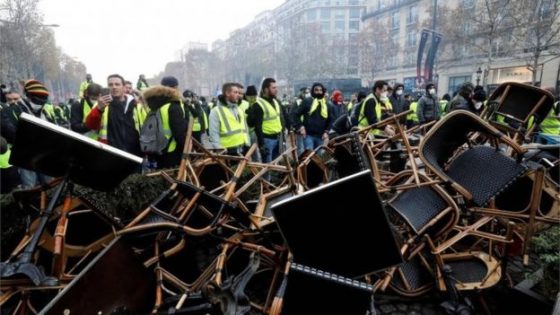 About 5,000 protesters marched down the Champs-Élysées.

Interior Minister Christophe Castaner accused the demonstrators of being influenced by the leader of the far-right National Rally party, Marine Le Pen. That’s deflection. Le Pen called him dishonest. I could have thought of a better descriptor albeit crasser.

The number of protesters attending was huge. 81,000 showed up by mid-afternoon – although accounts vary and some claim it was more like 23,000. Even at that, it was less than the first day of Yellow Jacket protests, which drew some 280,000 people a week ago.

Diesel, which is the most common fuel in French cars, has jumped 23% over the last year. Fuel is at its highest point since the early 2000s. With oil prices falling, you have to wonder why. Well, just ask Macron. He slapped French fuel with a hydrocarbon tax this year of 7.6 cents per liter on diesel and 3.9 cents on petrol, as part of a campaign for cleaner cars and fuel. Yep, he’s a progressive socialist elitist who just can’t understand why the French are so up in arms over this. The last straw was his decision to impose a further increase of 6.5 cents on diesel and 2.9 cents on petrol on January 1st, 2019. 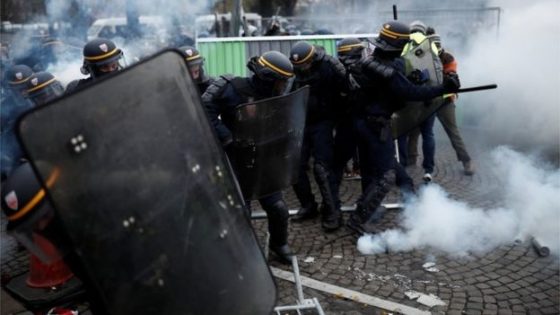 Organisers billed the latest protests as “act two” in a rolling campaign.

Macron, like any good socialist, was quick to blame world oil prices for three-quarters of the price rise. That makes no sense. He also said more tax on fossil fuels was needed to fund renewable energy investments. It’s the old ‘climate change’ scam that President Trump appropriately dumped.

More fun and games ensued when a man was arrested on Friday in eastern France after threatening to blow himself up with a grenade unless he was granted a meeting with President Macron. The 45-year-old, wearing a yellow jacket, was cornered in a car wash in the town of Angers but surrendered to police after several hours of negotiations.

The protesters take their name from the hideous yellow jackets that all drivers in France have to carry in their cars as part of safety equipment for use in a breakdown. Along with the familiar red reflective triangle which must be placed behind a broken-down vehicle on the side of a road, the high-visibility jacket – or “gilet jaune” – must be worn by the driver outside the car. Gee, I wonder if they are told where and how to relieve themselves as well? Failure to wear the jacket after a breakdown or accident can result in a large fine under a law introduced in 2008. 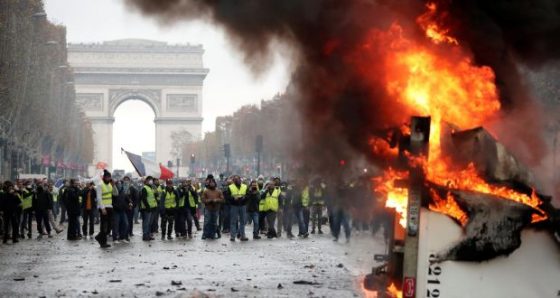 A truck burns during a “Yellow Vest” protest against higher fuel prices during clashes on the Champs-Elysees in Paris, on Saturday. Photograph: Benoit Tessier/Reuters.

The protests are organized and carried out via social media which has the elites upset. Thousands of police showed up to battle the protesters. At the foot of the Champs-Elysees, protesters wielded placards reading “Death to Taxes” and overturned a large vehicle. Six were arrested for throwing projectiles. And tell me if this sounds familiar: “It’s going to trigger a civil war and me, like most other citizens, we’re all ready,” said Benjamin Vrignaud, a 21-year-old protester from Chartres.

And it’s not just fuel that has the French up in arms.

From the Gatestone Institute:

US President Donald Trump and French President Emmanuel Macron engaged in a public diplomatic clash just days before Trump visited France this month. The spat began when, in a radio interview, Macron suggested that Europe needed an army to protect itself from the US. “We have to protect ourselves with respect to China, Russia and even the United States of America,” said Macron.

Protecting France from the United States? In a November 11 speech commemorating World War I, Macron in a diplomatic welcome to his guest, attacked “nationalism”. President Trump had proudly called himself a “nationalist”less than three weeks before.

Macron, it seems, was using the armistice signed in 1918 to forget what is going on in France in 2018.

Gérard Collomb, France’s Interior Minister until last month and currently Mayor of Lyon, is apparently pessimistic about the situation in his country, according to comments reported by Valeurs Actuelles. “People do not want to live together,” Collomb lamented, continuing that the responsibility for security during the recent immigration has been “huge.” Collomb also warned that there is only a “little time” to improve the situation. “It’s difficult to estimate but I would say that in five years the situation could become irreversible. Yes, we have five, six years to avoid the worst,” he added.

And the worst will be a “secession“, or as Gilles Kepel, the French specialist on Islam, called it: “La fracture.”

Macron could perhaps be France’s last president before Europe succumbs to Islamic immigrant hordes. All I can say is the embattled Macron better hope the French don’t resurrect the guillotine.