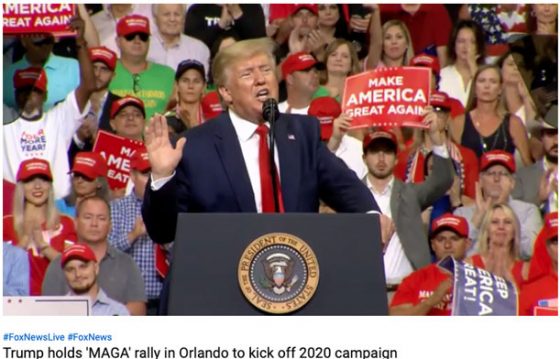 While I watched Trump’s speech, I chuckled thinking about the reaction of Democrats, fake news media, and the deep state. Trump exposed their lies, hypocrisy, and illegal silent coup to reverse the 2016 election. I wonder how many of them have to replace their TV after throwing a brick through it.

I suspect many Republicans were uncomfortable watching Trump’s speech. He simply does not play by standard so-called “dignified” Washington D.C. rules. Trump is one of a kind. He follows his instincts; a man of and for the people. Only an outsider like Trump could break through the D.C. walls of insider corruption to stack up unprecedented wins for We the People.

Born in 1927, Sidney Poitier was the first black actor to win an Academy Award for Best Actor. When he went to Hollywood, Poitier’s brain was not infected with limitations on what blacks were allowed to do. Poitier simply pursued his dream. I see Trump in a similar light. Trump arrived in Washington not limited by how he as a Republican was expected to behave. Trump simply set out to fulfill his campaign promise to make America great again.

Thank God that despite all of his advisers and despite deep state, Democrat and fake news media political assassins laser-focused on undermining his presidency, Trump has remained Trump. He is the same guy we sent to the Oval Office. Folks, that is incredible.

Trump’s speech revealed a far more ideologically conservative Trump than he was is 2016. When Trump ran for the presidency, he was not ideological. His leanings appeared to be towards the left. He probably thought conservatives were a bit paranoid and over-the-top sounding the alarm about how Democrats seek to undermine our country’s best interests. But when the American left responded with furious wrath and anger against Trump for his “Make America Great Again” campaign slogan, Trump’s eyes were opened. Incredibly, the American left’s vitriolic, insane 24/7 relentless rebuke and hatred for everything Trump does for America has pushed Trump further to the right.

Leftists meant their ever-increasing deranged hatred for Trump and attempts to stop him for evil. God meant it for good. Trump is closer to the ideals and values of the American people than ever.

Trump’s speech included a few other things which had Democrats and fake news media falling to the floor, groaning in pain, like Dracula shown the cross. In defense of the unborn, Trump boldly said Republicans believe every life is a sacred gift from God. Trump unapologetically proclaimed that we will live by the words of our national motto, “In God We Trust.” Remember when Obama decreed that America is not a Christian nation? Democrats and fake news media are relentless in their mission to remove the God of Christianity from our government and culture. Democrats’ latest attempt to make God illegal is their falsely titled, “Equality Act.”

Concluding his speech, Trump said, “A vote for any Democrat in 2020 is a vote for the rise of radical socialism and the destruction of the American dream.” I say, “Amen brother!”

Brother and sister Americans, we absolutely must reelect President Donald J. Trump in 2020.