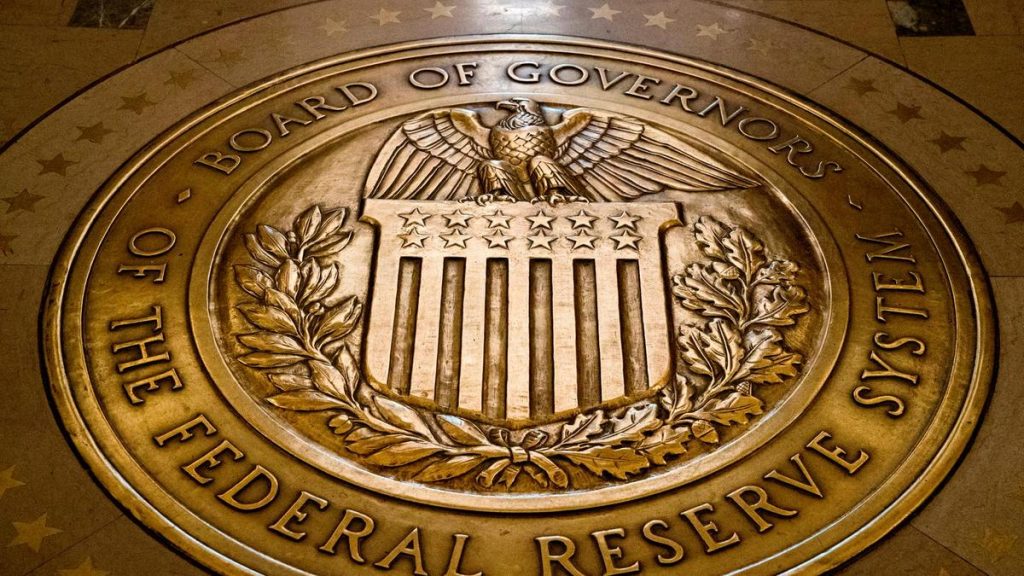 Yes he does.  The Federal Reserve System is collapsing due to the inherent instability of a monetary system, not based on gold & silver, but on the Fed’s “right” to create “money” out of thin air1 which it then lends to the US Treasury (and is added to the national debt),2 in order to fund the federal government’s massive, grotesquely unconstitutional, and out of control spending.

This process of allowing the Fed to create “money” out of thin air with nothing behind it has been going on since 1933, when the promise (set forth in §16 of the Federal Reserve Act of 1913) to redeem Federal Reserve Notes in gold was revoked as to domestic holders;3 and culminated during 1971, when redemption of the Notes in gold to international holders was also suspended.4

Once the statutory promise to back Federal Reserve Notes with gold was rescinded, the sky was the limit on how much fiat “money” the Fed could create, lend to the US Treasury (and be added to the national debt), in order to fund still more massive, grotesquely unconstitutional, and out of control spending by the federal government.

Now we have reached the point where the federal deficits are so huge and increasing at such a furious pace that our entire fiat “money” financial system is coming apart.5

So what are we going to do about it?  Does Trump want to get rid of the Fed so we can return to the constitutional money system described in Point 2 below?

Trump may say that he wants to return to the gold standard;6 but the USMCA “Trade Agreement” he signed doesn’t do that.  The Globalists’ Plan, which is advanced by USMCA, is to ratchet up the fiat “money” system created by the Federal Reserve Act of 1913, from a national to a global level with a central bank and the International Monetary Fund (IMF) managing and enforcing an international monetary system.  And as Edwin Vieira, Ph.D., J.D., warned 8 years ago [here]:

“The true perversity of the present situation lies in the indication … that this scheme for a new supra-national monetary order will be sold to a doubting world by attaching some sort of “gold standard” to it….”

The IMF is an institution in the United Nations system.

The IMF has already created (it was done during 1969), out of thin air, an international fiat currency called “special drawing right” (SDR).  The stated purpose of SDRs was to increase liquidity in settling international accounts by making short term loans to member countries to cover their balance of payments, and other temporary financial problems.

USMCA Art. 33.1 shows that the IMF is to monitor our compliance with the IMF’s Articles of Agreement (please let that sink in).

USMCA Chapter 17. Financial Services harmonizes the Banking, Insurance, and Investment Practices of Canada, the United States, and Mexico.  This harmonization removes previously existing barriers to global regulation of those areas and to merging regional currencies into a global currency.7

As anyone who reads USMCA can see, the purpose of USMCA is to remove barriers to global regulation of all the areas covered by USMCA, and to advance development of a new global “money” system which will replace our collapsing Federal Reserve System.

Look at the Table of Contents for USMCA:  All those areas:  agriculture, textiles and apparel goods, customs administration, sanitary and phytosanitary measures, telecommunications, intellectual property (patents), labor (which includes immigration and gender & sexual orientation discrimination in the workplace), the environment,  etc., are to be made subject to global regulation.

Trump may give grand speeches before the United Nations saying he opposes globalism and supports nationalism, but the USMCA “Trade Agreement” he signed moves us into global government.8

And the claim that USMCA is about getting favorable tariff agreements for the United States is the Biggest Lie since the Garden of Eden.

Our Framers created a Constitution which delegates only “few and defined” powers to the federal government.  This one page chart lists those powers.

Accordingly, except for national defense, our federal government doesn’t need much money to fund its constitutional powers.  So our Framers created a taxing system wherein the funds needed to operate the federal government were raised by the import tariffs and excise taxes authorized at Article I, §8, cl. 1, and by the apportioned direct assessments on the States authorized at Article I, §2, cl. 3.9

Congress is also authorized at Article I, §8, cl. 2, to borrow money on the credit of the United States; but our Framers intended borrowing money to be restricted to funding national defense.10

Our Framers also established a money system based on gold & silver:

A money system based on gold & silver and a limited taxing system were perfect for a federal government of “few and defined” powers.  Furthermore, such systems – if adhered to – would have prevented the emergence of the totalitarian socialist regulatory welfare state we have today.

“…A rage for paper money, for an abolition of debts, for an equal division of property, or for any other improper or wicked project…” James Madison, Federalist No. 10.

Why does Madison refer to paper money as an “improper or wicked project”?  Because, among other evils, paper money provides governments with access to unlimited amounts of credit – and that is what was needed to finance the totalitarian socialist regulatory welfare state we have today.

When the Progressives12 took over our Country during the early 1900’s, they needed lots of “money” to fund their unconstitutional regulatory and “welfare” schemes.  But the federal government didn’t have enough gold and silver coins to fund the regulatory welfare state they wanted.  So the Federal Reserve System was created in 1913 to set up a central bank – the “Fed” – which (thanks to fractional reserve banking) would have the power to supply the federal government with the “money” it wanted.13

So it was access to this credit which enabled the federal government to exceed its constitutional limits.

With this easy credit, the federal government was enabled to “buy” the States by giving them fiat “money” to implement unconstitutional federal programs:  State governments literally sold the retained powers of the States and the People to the federal government.  A particularly malignant example is U.S. Senator Marco Rubio’s “Extreme Risk Protection Order and Violence Prevention Act of 2019” (“red flag” law), which appropriates $20 Million for each of FY 2019-2023 to pay to States and Indian Tribes which pass the “red flag” legislation set forth in Rubio’s bill.  If a Respondent, whose arms have been taken from him in an ex parte hearing [i.e., a hearing Respondent wasn’t notified about until after the Order had been issued to seize his arms], wants his arms back, he must prove, by clear and convincing evidence, that he does not pose a significant danger of causing personal injury to himself or others by having arms in his possession.

Rubio’s bill puts the burden of proof on the Respondent.  For eons in Anglo/American Jurisprudence, it has been the task of the government to PROVE GUILT.  But Rubio would reverse that and require Respondents to PROVE THEIR INNOCENCE. This is evil.

Rubio’s bill is also unconstitutional as outside the scope of powers delegated to the federal government; and it violates the “Privileges and Immunities clause of Article IV, §2; violates the 2nd Amendment; and violates the “due process” clauses of the 5th Amendment and §1 of the 14th Amendment.

How many States and Indian Tribes will surrender their Citizen’s Right to THE PRESUMPTION OF INNOCENCE by passing Rubio’s “red flag” law in order to get the “money” from the fed gov’t?14

If we had preserved the monetary system set up by our Constitution, the federal government wouldn’t have been able to become the totalitarian monster it is today.  If you want a limited government, don’t give it unlimited “money”.

In Part 4 of his “A CROSS OF GOLD” series at sub point [3] and in Part 5, Dr. Edwin Vieira shows how States can protect their Citizens from disaster by setting up an alternative gold currency.

The Tenth Amendment Center has model legislation for States to take some steps in the right direction:  See THIS under the heading, “End the Fed from the Bottom Up”.

Open your eyes, Americans.  Time is running out.

1 See excerpt from testimony before Congress on Sep. 30, 1941 by the then Governor of the Fed.

2 Robert P. Murphy, Is Our Money Based on Debt?

5 The Fed Has Lost Control

“Globalization is the process of breaking through the protective barriers designed to separate the nation-states from the world system. Between 1944 and 2008 [Bretton Woods I & Bretton Woods II] all the nation-state barriers have been removed with exception of the national regulatory laws governing financial institutions, insurance companies, mortgages, and Wall Street. The real purpose of BWII is to establish the framework for a global regulatory system.  This also presents the possibility of merging all regional currencies into a global currency.”  [italics added]  You can also see her video HERE.

8 See:  USMCA and the Quest for a North American Union  and The USMCA “Trade Agreement” violates our Constitution and sets up Global Government.

9 HERE is the Act of 1813 where Congress laid a direct tax of $3 Million upon the United States.  It shows how Congress apportioned the tax (based on population) as required by Art. I, Sec. 2, cl. 3.  (See page 93 of the linked pdf edition.)

“The power of levying and borrowing money, being the sinew of that which is to be exerted in the national defense, is properly thrown into the same class with it. This power, also, has been examined already with much attention, and has, I trust, been clearly shown to be necessary, both in the extent and form given to it by the Constitution. …”

11 Congress is not authorized to create paper money.  In “A CROSS OF GOLD”, Dr. Edwin Vieira says:

[at Part 2]: “…America’s Founding Fathers, realists all, denominated redeemable paper currency as “bills of credit”. They knew that such bills’ values in gold or silver always depended upon the issuers’ credit—that is, ultimately, the issuers’ honesty and ability to manage their financial affairs.…” [boldface added]

[at Part 3]: “…every form of “redeemable currency” put out through the Federal Reserve System is, by definition, a governmental “bill of credit”, which Congress has no authority to emit, directly or indirectly.” [boldface added]

When, in 1933, the promise to redeem Federal Reserve Notes in gold was repudiated, the federal government dishonored their “bills of credit”.  We should have listened to our Founding Fathers.

12 In the 1880’s, the Fabian Society was founded in England.  Fabians advocate a gradual transition to socialism [as opposed to violent revolution].  They also hold that the elite – and they are the elite – should run everything [as opposed to the Dictatorship of the Proletariat.]  In the early 1900’s, Fabians took over our Country – here they went by the name, “Progressives”.  Teddy Roosevelt & Woodrow Wilson were Progressives; and the Fabian socialist ideology has dominated our Country ever since.

13 For an education in the basics of the Fed, fractional reserve banking, and the creation of “money”, see Robert P. Murphy’s article at end notes 1 & 2; and Dr. Edwin Vieira’s fascinating explanations of these issues in his “A CROSS OF GOLD” series HERE.  Dr. Vieira also shows why we must not accept a new global fiat currency and central bank to replace the collapsing Federal Reserve System.

14 And all that money used to bribe States and Indian Tribes to pass Rubio’s “red flag” law, will be added to the national debt.

One thought on “So you think Trump wants to get rid of the Fed?”