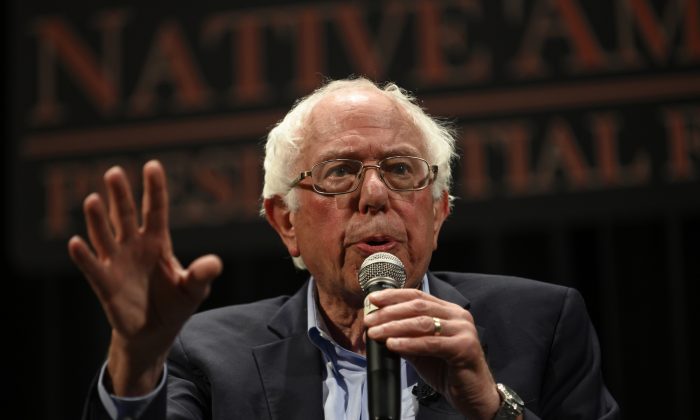 “Our Revolution” and “People for Bernie,” two key elements of the Bernie Sanders for President movement, have developed a close relationship with a militant Norwegian communist party.

The party in question, Rodt (Red Party), was formerly known as the Arbeidernes Kommunistparti (AKP or Workers’ Communist Party) and was notorious in Norway for its open support of Cambodian communist leader and mass murderer Pol Pot.

The Sanders movement’s ties to one of the most extreme communist parties of Europe gives the lie to Sanders’ often-repeated claim that his “democratic socialism” has nothing to do with communism.

The AKP was founded in 1973 as a Maoist competitor to the pro-Soviet Norwegian Communist Party. The AKP, in common with many other Maoist parties of the era, openly supported mass-murderers Joseph Stalin and Pol Pot.

According to the “Black Book of Communism,” Pol Pot’s Beijing-backed Communist Party of Kampuchea,  or “Khmer Rouge,” was responsible for the deaths of approximately 2 million of Cambodia’s 6 million people in its bloody three-year reign. Approximately 1.3 million of these victims were deliberately executed by the regime and buried in about 23,000 mass graves.

The AKP openly called for armed revolution before 1990 and kept the possibility of having to “defend the revolution with arms” open for some time after.

In 2007, the AKP re-branded itself as “Rodt” and turned its focus more toward electoral politics. The party claims to no longer support violence but does state that its goal is still a “classless society” or “what Karl Marx called communism.”

This has been mirrored in the United States by the backbone of the Sanders movement, the Democratic Socialists of America (DSA), which includes in its rank Trotskyists from “Solidarity” and Maoists from Liberation Road, the new name for FRSO.

After developing deep ties with FRSO over several years, Rodt began to build links with the wider Sanders movement during the 2016 election cycle. In October 2016, the New York City branch of FRSO sponsored a small get-together of “local labor activists, Sandernistas and other lefties” to meet Reidar Strisland—former youth leader of the Oslo section of Rodt. Strisland was in the United States for two months gathering material for a book on the Sanders movement.

Strisland visited comrades in Detroit and Lansing, Michigan, and Toledo, Ohio, as well as in Chicago, Seattle, San Francisco, Los Angeles, and at the Dakota Access Pipeline protests in South Dakota. Strisland was back during the 2018 U.S. midterm elections, scoring photo-ops with several DSA-supported candidates, including Senate candidate Beto O’Rourke in Texas and congressional candidate James Thompson in Kansas.

According to Wong and Sandberg: “We spent hours in trainings and breakout strategy sessions with Rodt party organizers digging into the nuts and bolts of digital and social media best practices, barnstorms, peer-to-peer text messaging, dank memes, and more.”

The training seems to have worked. In the 2017 elections, Rodt leader Bjornar Moxnes was elected as the sole representative of the party in the Norwegian Parliament.

In a play on the Sanders slogan “Feel the Bern,” Rodt campaigners wore “Feel the Bjorn” T-shirts as they campaigned in Oslo.

Is it legal for American Marxists to involve themselves in Norwegian elections?

In February 2018, Larry Cohen, chairman of the Sanders support network Our Revolution, traveled to Oslo to address a special Rodt strategy conference.

The leader of a Sanders support organization claiming more than 200,000 members and 600 groups across the United States gave a keynote speech at a high-level planning conference with one of Europe’s most militant communist parties—with zero media scrutiny.

Key operatives in the movement to elect Sanders to the U.S. presidency are working with a European communist party that once openly supported Pol Pot. Senior American Sanders supporters seem to have played a role in electing a revolutionary Marxist to the Norwegian parliament.

Nothing to see here, folks.