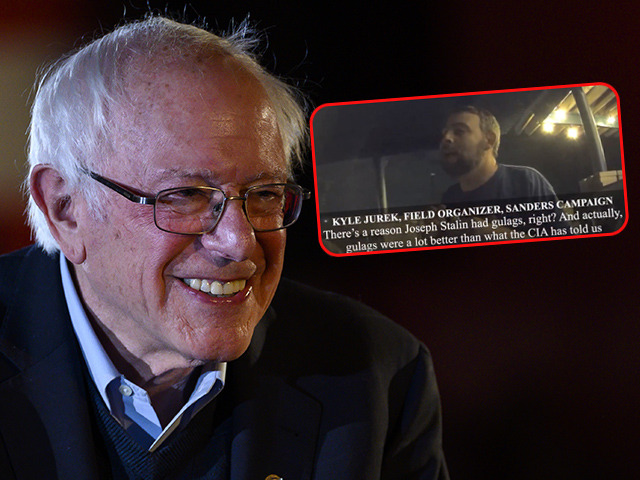 I don’t know how anyone can be surprised by this or even in the least shocked. Bernie Sanders isn’t really a socialist, he’s a communist and of course, he’s going to hire people like this useful idiot. Project Veritas dropped a bombshell today exposing a field organizer for Sen. Bernie Sanders’ 2020 campaign saying Soviet gulags were actually a positive phenomenon, suggesting that some similar program could re-educate Trump supporters and billionaires. Yes, they really, really think like this.

In the released video, a Project Veritas journalist is seen asking an individual identified as Sanders’ organizer Kyle Jurek if “MAGA people” could be re-educated if Sanders wins the White House. “We gotta try,” Jurek replies. “In Nazi Germany, after the fall of the Nazi Party, there was a shit-ton of the populace that was fucking Nazified.” And he was just getting warmed up. Hard to believe that Sanders doesn’t see things this way as well and in fact, knew this guy would spout this. This was after he said cities will burn if Trump is reelected. That would not surprise me either.

BREAKING: @BernieSanders “free education” policies to “teach you how to not be a f**king nazi.”; 'There is a reason Stalin had Gulags'; 'Expect violent reaction' for speech. If Bernie doesn't get nomination "Milwaukee will burn"

Not only is this terrifying and revealing… it is also deeply evil. And this is who those such as Alexandria Ocasio-Cortez and many Millenials are coalescing around. It’s beyond disturbing. They do not know history and they are self-entitled morons who think they will get everything for free and bring social justice to those who have more than they do. In the end, if history teaches us anything, their bodies will simply add to the heap of the dead as the communists rampage through the countryside. People never learn.

“Germany had to spend billions of dollars re-educating their fucking people to not be Nazis,” Jurek states. “We’re probably going to have to do the same fucking thing here.” Or, they’ll just slaughter those who do not agree with them. “That’s kind of what all Bernie’s whole fucking like, ‘hey, free education for everybody’ because we’re going to have to teach you to not be a fucking Nazi,” he added.

Sanders leads the Democratic field right now. The Dems don’t want him but their base certainly does and it should be ringing alarm bells from coast to coast. This isn’t hyperbole… this is what they really think and believe. It’s communism in its truest form.

“In another part of the video, Jurek is seen discussing Soviet Union dictator Joseph Stalin’s use of gulags, where he claims that the CIA was overly critical of them. “People were actually paid a living wage in the gulags. They have conjugal visits in gulags. Gulags were meant for re-education,” he says.

Watch this very closely for clues as to what is about to drop.

Watch until the very end…#Expose2020

“Jurek is then seen suggesting that the most effective way to re-educate the billionaire class is to order them to “break rocks for 12 hours a day.”

“[The] greatest way to break a fucking billionaire of their privilege and their idea that they’re superior, go and break rocks for 12 hours a day. You’re now a working class person, and you’re going to fucking learn what the means, right?”

“The video also shows Jurek warning that Milwaukee, host of this year’s Democratic National Convention, will “burn” if Sanders fails to win the party’s nomination. “If Bernie doesn’t get the nomination or it goes to a second round at the DNC convention, fucking Milwaukee will burn,” says Jurek. “It’ll start in Milwaukee and then when the police push back on that, other sites will fucking [explode].”

“The footage concludes with Jurek issuing the chilling prediction that Milwaukee could see riots akin to the 1968 convention in Chicago, where left-wing activists engaged in violent riots in the streets. “Be ready to be in Milwaukee for the DNC convention. We’re going to make [1968] look like a fucking girl’s scout fucking cookout,” warns the Sanders field organizer. “The cops are going to be the ones fucking beaten in Milwaukee.”

“The undercover video’s emergence comes as 2020 Democrats are slated to debate Tuesday evening — their final meeting before Iowa holds the nation’s first caucus on February 3. Project Veritas founder James O’Keefe has teased that Tuesday’s footage is one of several upcoming videos to be released as part of the group’s “Expose2020” campaign.”

Bernie the Red and his field organizer https://t.co/b1b8IVmdS1

Not only does Jurek, who has been paid $11,000 so far by Sanders’ campaign, advocate for putting Americans in gulags… he also talks about plans to shoot Americans who don’t fight for the “revolution.” Nice guy. I believe him without a doubt. Most people have no idea what an actual gulag was like. See the video at the end of this post for a reality check.

In a sane world, this would finish Bolshevik Bernie off. Sadly, we do not live in sane times and Sanders is the leading contender for now. Project Veritas will have more videos on this and I can’t wait to see them. However, they won’t tell me anything I don’t already know. Sanders and his followers are communists and/or useful idiots. Remember, those who don’t learn from bloody history are doomed to repeat it. And Bolshevik Bernie who was trained and married in the Soviet Union and cuddled with Fidel Castro can’t wait to repeat history.

I'm old enough to remember when

Gulags were a good thing? Wtf is going on here! Our education system failed those young man. They truly believe what they are saying and I believe Bernie is using this to his advantage. That’s sickening.

If you don’t see this as horrifying, then you’re blind.

What the ??? Beyond disturbing…