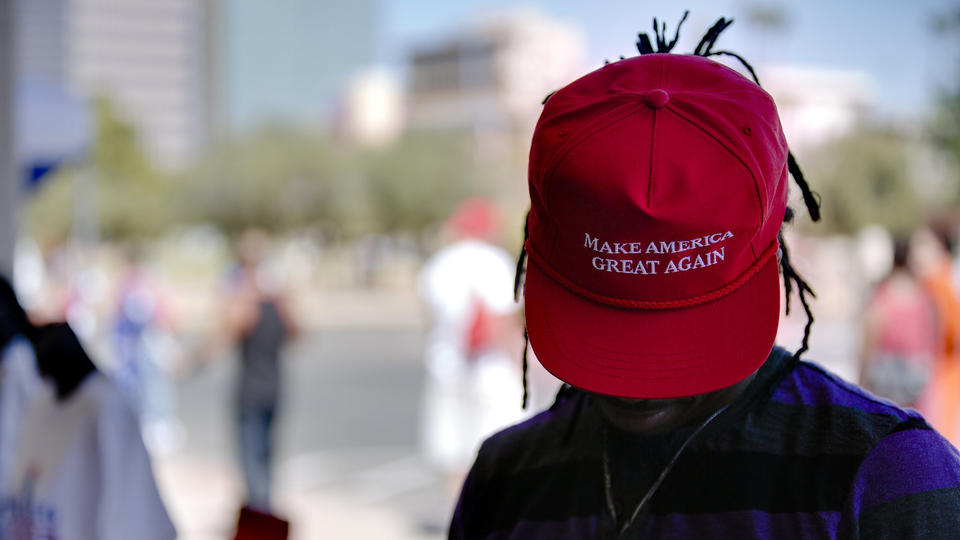 My wife Mary and I spent a wonderful weekend in California with fellow Trump supporters filming the music video for my Trump Train 2020 song.  We boarded our flight back home to the East Coast on Sunday at 8 P.M., arriving at BWI airport in Maryland on Monday at 10:30 am. We were exhausted.

The taxi driver taking us to our car was listening to NPR. A radio show host and his caller were lying about Trump, venomously declaring him a serial liar. Perhaps it was because I was so tired that I had zero tolerance. I spouted, “Those guys are lying jerks!” I launched into a rant defending my president.

The taxi driver pounced. In a heavy Middle-Eastern accent, with a smirk, he said, “You actually believe the president is not a liar? I have lived in this country for 40 years. I am not stupid. Bush left Obama a horrible economy. Obama made things better for everyone.”

My feisty wife jumped into the conversation, passionately educating the duped driver. I tapped Mary on the leg, signaling her to stop talking because as their exchange grew more heated, the driver began flailing, taking his hands off the wheel and eyes off the road. I wanted him to calm down and focus on driving. Clearly, our taxi driver was crazed with fake news media-induced Trump Derangement Syndrome. He was not open to hearing the truth. Some people are stuck-on-stupid.

Trump-deranged black family and friends believe I am a traitor to my race for not worshiping Obama and supporting Trump. They ignore the truth that blacks moved economically backward under Obama.

Blacks are thriving under Trump, enjoying the lowest black unemployment in U.S. history. And yet, my siblings are routinely asked by fellow blacks, “What is wrong with your brother who supports Trump and votes Republican?” Either these blacks are infected with Trump Derangement or stuck-on-stupid.

I’m a former Baltimorean. Several Baltimore blacks insist on remembering their Trump-hating late Congressman Elijah Cummings as a hero. Because Cummings was black, they accuse me of betraying my race for writing about Cummings’ corruption.

Cummings received over $15 billion in federal funds to clean up his rat-infested, record-breaking black-on-black homicide district which has endless blocks of rundown vacant houses. The federal funds magically disappeared without fulfilling their purpose. Cummings’ loyalists absurdly say I am the bad guy, an Uncle Tom tool of Trump and Republicans. These blacks are stuck-on-stupid.

The shocking truth is Elijah Cummings did not give a rat’s derriere about improving the lives of or empowering blacks. The same thing is true about the Democrat party, NAACP, Congressional Black Caucus, Jesse Jackson, Al Sharpton, fake news media, and other faux advocates for blacks. To these leftists, blacks are nothing more than a faithful monolithic voting-bloc of useful idiots.

It does not take a genius to recognize that everything good, liberating, and economically empowering for blacks is vehemently opposed by a coalition of leftist faux civil rights activists. The Evil Civil Rights Empire rolls out the red carpet, welcoming illegals who harm blacks economically.

By its bigotry of lowered expectations, the Evil Civil Rights Empire insinuates that blacks are inferior. It always insists that standards be lowered to make things fair for blacks. Remember the insulting Democrat lie that requiring a photo ID to vote disenfranchises black voters?

When Trump announced at the State of the Union that black unemployment was at a historic low, the members of the Congressional Black Caucus sat on their hands, stone-faced, while everyone else in the chamber applauded and cheered. The CBC does not care about blacks. The Evil Civil Rights Empire only cares about gaining the power to control every aspect of Americans’ lives to implement its socialist/progressive and anti-Christian agenda.

The disgusting dirty secret is the Evil Civil Rights Empire wants blacks solely dependent upon government and uneducated about their constitutional freedoms. It wants blacks believing the lie that a majority of Americans are white supremacists, obsessed with concocting ways to suppress blacks. Its bogus, divisive, destructive, and insidiously evil narrative is “vote for Democrats to keep rabidly racist white America at bay.”

That’s the bad news. But be of good cheer, folks. I am extremely pleased to announce great news. Shockingly, 34% of blacks say they support Trump.  Wow! That is awesome!

To blacks who have seen the light, welcome aboard the Trump Train!  To blacks who insist on staying on the Democrats’ government plantation, “You can’t fix stupid.”

Even though the taxi driver was annoying, we tipped him. 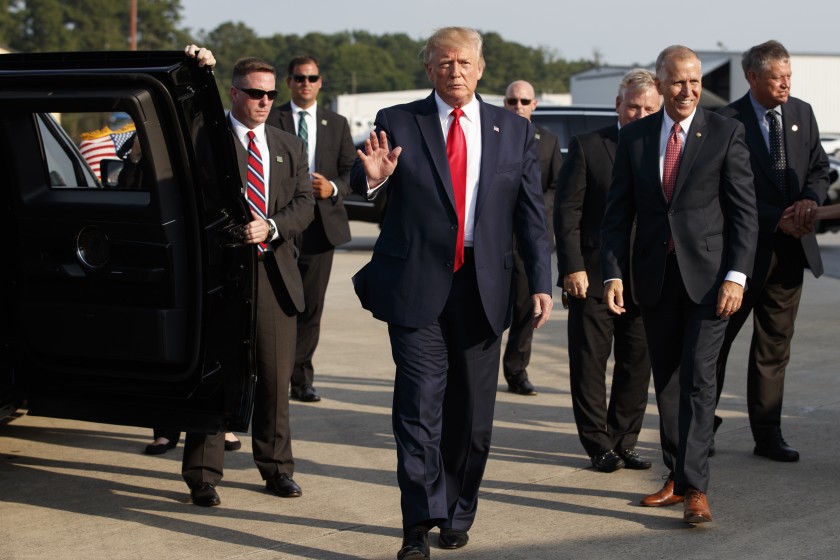 In one of the biggest blunders of the Trump presidency, it has been decided that two of Jeffrey Epstein’s lawyers should be on the team defending President Trump against impeachment. This time, the anti-Trump headlines can’t be blamed on liberal media bias.  “Alan Dershowitz, marred by ties to Jeffrey Epstein, will defend Trump at impeachment trial” was the Los Angeles Times headline.

Dershowitz, who is knowledgeable and media-savvy, is a Harvard Law Professor Emeritus. The Washington Post noted that he is a friend and supporter of Bill and Hillary Clinton who voted for her in 2016 and even contributed money to her campaign. He voted for Barack Hussein Obama twice before turning on him over his treatment of Israel. A more complete analysis of his donations, according to OpenSecrets.org, reveals thousands of dollars over the years to mostly Democratic Party candidates such as Ted Kennedy, Elizabeth Warren, John Kerry, and Al Franken.

There is no doubt that Trump has an excellent case to make against impeachment and that the Senate won’t convict him. The strange part of the story is why his defense team not only includes liberal Democrat Dershowitz but the “Republican” lawyer who botched the impeachment case against Bill Clinton, Kenneth Starr. He is a Fox News contributor who served as Independent Counsel investigating the Clintons from 1994 to 1999. He failed to pursue the most serious charges, including a cover-up surrounding the 1993 death of Deputy White House counsel Vincent Foster.

Strangely, both defended billionaire pedophile Epstein, a high-level friend of the rich and powerful whose alleged suicide in prison has been openly questioned and even ridiculed.  Asked why he defended Epstein, Starr replied, “I was very happy to respond to the needs of a client of the firm.” The comments were made after a 2015 National Press Club event on “the future of higher education and the calling of faith-based institutions.”

Starr served as president of Baylor University, a private Christian University, only to be fired for allegedly ignoring sexual assault issues on campus. Some stories refer to him as the “disgraced” former Baylor University president. But none of that bothered Fox News, which hired him as a legal analyst.

As Independent Counsel, Starr nailed Clinton on lying about his affair with former White House intern Monica Lewinsky. But he and his successor as Independent Counsel, Robert Ray, failed to bring charges against the Clintons on other more serious scandals. Ray, who changed his voter registration from Democrat to independent before taking the job, claimed that he didn’t have enough evidence to proceed with prosecution.

Ray, who is also on the Trump impeachment defense team, rubber-stamped Starr’s conclusion, in the face of overwhelming evidence to the contrary, that White House deputy counsel Vince Foster committed suicide where his body was found in Ft. Marcy Park. In Travelgate, he failed to hold Hillary Clinton responsible for ordering the unjustified firing of seven career White House travel office employees with unblemished reputations. Billy Dale, head of the travel office, commented, “I am disappointed by Robert Ray’s decision to not prosecute Hillary Clinton and others in the Travelgate affair. Bill and Hillary Clinton tried to have me thrown in jail to cover up their corrupt efforts to give the Travel Office’s business to their friends. Unsurprisingly, a jury found me innocent of all of Hillary Clinton’s charges in record time.”

In Filegate, the Clintons were not held accountable for the improper acquisition of more than nine hundred FBI files, mostly on Republicans of previous administrations.

Tom Fitton of Judicial Watch commented at the time, “Judicial Watch has serious differences with Independent Counsel Ray, who should have indicted Mrs. Clinton and others in both Travelgate and Filegate.”

Foster researcher Hugh Turley comments on the curious developments in the Trump impeachment case, as lawyers who failed to hold the Clintons accountable for serious wrong-doing are now supposed to be defending Trump. He notes, “Robert Ray, who replaced Starr as Independent Counsel, is also on the Trump team. Starr was also on the Jeffrey Epstein defense team.   And Dershowitz, another member of Trump’s defense, was associated with Epstein. As you know, Bill Clinton was linked to Epstein. Starr only appeared to be Clinton’s enemy while he actually covered up the murder of Vince Foster.”

This sounds like a “conspiracy theory” to those who have not bothered to investigate the curious circumstances surrounding Foster’s demise. But Turley, with John H. Clarke and Patrick Knowlton, co-authored the final 20 pages of Ken Starr’s report on Foster’s death. The U.S. Court of Appeals that appointed Starr as Independent Counsel ordered Starr, over his objection, to include their analysis in his report. That analysis, on their website, www.FBIcover-up.com, contradicts Starr’s suicide-in-the-park finding.

Foster, like Epstein, was the man who knew too much.

As we note in our special report, The Deep State Wears Black Robes, “He [Foster] had knowledge of various Clinton scandals, including Travelgate, the Waco tragedy, and possibly some illegal activities involving national security. His secretary testified he had access to mysterious binders associated with the NSA, the agency that conducts mass surveillance, ostensibly for the purpose of monitoring terrorists and foreign agents.”

Accuracy in Media founder Reed Irvine and I wrote at the time that while President Clinton was charged by Starr with perjury and obstruction of justice surrounding a sex scandal, there were much greater abuses of power and illegal activity for which he should have been removed from office. We were voices in the wilderness.

It’s mighty suspicious that Trump has been maneuvered into hiring people who either voted for Hillary or failed to hold her and her husband responsible for serious misdeeds. It not only looks bad but suggests that defending Trump may be useful to some in preventing the president from getting to the bottom of the Clinton scandals. After all, such an investigation could lead back to Trump’s attorneys.