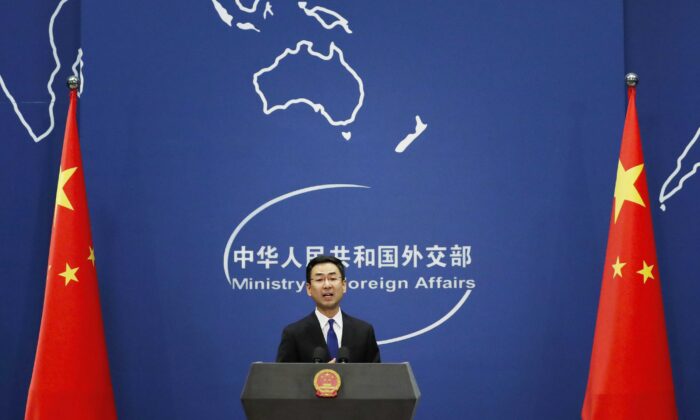 Chinese Foreign Ministry spokesman Geng Shuang speaks during a daily briefing at the Ministry of Foreign Affairs office in Beijing on March 18, 2020. American journalists were expelled from China in retaliation for a new limit imposed by the Trump administration on visas for Chinese state-owned media operating in the United States. (Andy Wong/AP Photo)

Several of this country’s many communist parties are loyal to the Chinese regime rather than to the United States of America. Consequently, it’s not surprising that some American communists are closely echoing the Chinese Communist Party (CCP) propaganda line over the coronavirus pandemic.

Firstly, deflect blame for the pandemic away from the CCP. Promote the lie that the CCP is leading the world in virus containment, even though the disease gained an international foothold precisely because the Chinese regime covered up and lied about the seriousness of the outbreak—and is probably still doing so.

Secondly, hew to the “line” that socialist health care systems and planned economies are far superior at containing epidemics than is heartless “capitalism.” The rich are profiting off the poor and the middle class and only socialism can bring justice.

Thirdly, defend the CCP at all costs from any accountability or shame for its negligence (or worse). Paint “China” as a victim of U.S. aggression and prepare to defend Beijing from Western sanctions or even U.S. military attack. Divert as much blame as possible onto President Donald Trump and the U.S. government.

“As the number of confirmed cases of the viral illness COVID-19 approaches 200,000 worldwide, we can already see how differently issues of public health and human needs are treated in socialist countries vs. capitalist countries.

“COVID-19 was first detected in Wuhan, a major city in the People’s Republic of China. Local officials took three to four weeks to recognize its significance. Once the threat was clear, the whole of the country and vast resources were mobilized. Everything was shut down to stop the virus in its tracks. People were quarantined at home as new hospitals were constructed, some in as little as ten day’s time, to manage the large numbers of sick people.

“Because there is a cradle-to-grave social safety net in socialist China, people could be quarantined at home, with neighbors assigned to check on each home, identify needs and find solutions. China shut down the country for eight weeks for the singular purpose of saving lives.

“As of today, most of the deaths from COVID-19 are outside China, and the epidemic in China is essentially under control. All those wealthy countries, even those with national health systems, have not been as effective as China in combatting the disease. This shows the superiority of a socialist society, where serving the wealthy is not the first priority of the government.”

In a March 17, FightBack! report, an unnamed FRSO cadre wrote from Guangdong, China, on the situation on the ground there. He or she makes some very unflattering and completely untruthful comparisons between the CCP response to the pandemic and that of President Trump and the U.S. government.

“There is chaos in America right now surrounding COVID-19. Americans are receiving conflicting information every day about the virus, with no direction from the Trump administration. The Trump administration has decided that the best course of action is to do nothing, with Trump himself declaring ‘I don’t take responsibility at all.’ …

“At the same point of the virus’s timeline that we’re now at in the United States, China already had entire cities under quarantine. … Trump has already said that even if a vaccine were to be released, our for-profit system wouldn’t guarantee it would be available to everyone. Without access to guaranteed sick leave, working-class people are forced to make the difficult choice between remaining at work and exposing themselves to the virus or staying at home with their families while earning no income. …

“The United States’ messy capitalist system has made it so that there is no such widespread and effective campaign designed to protect working-class people. As such, many are without guidance at the moment. In a return to an almost feudalistic society, states and cities are left to fend for themselves and make up their own public safety policies. …

“In China, its socialist system provided a meticulous, centrally planned response that completely suffocated the epidemic and protected its people. Things are finally returning to normal here only because of the carefully organized actions from the government. Meanwhile, in the U.S., its capitalist system continues to haphazardly and inefficiently combat the outbreak which is quickly spiraling out of control. The U.S. would be well served in following the shining example from China and developing a universal healthcare system that puts the needs of its people over the profits of wealthy corporations.”

C.J. Atkins is the managing editor of the CPUSA’s People’s World website. In a March 18 article, Atkin’s interviewed “Lupin,” a young man recently returned to Wuhan from working in Canada:

“Trump and his coronavirus point-man, Vice President Mike Pence, parade corporate CEOs at televised press conferences and present the private sector as savior. China has taken the opposite stance. ‘China nationalized this crisis from the beginning and made it the country’s priority above everything else,’ Lupin asserts. ‘With the solidarity of 1.4 billion people and the entire machinery of the Communist Party of China engaged, we came through the darkest moment.’ …

“Lupin says he has ‘witnessed the extent of efforts the Chinese government and its citizens have made.’ Looking West, he believes ‘the things the U.S. and Canada are doing so far are nowhere close to it yet.’ …

“‘A month ago, many countries mocked the situation in China as if it will never become a “First World” countries issue. Now, these same countries are hoping China will come to their rescue’—which is precisely what is happening in Italy, where teams of Chinese experts have arrived to help.”

Ian Goodrum is a CPUSA member working as a writer and digital editor for China Daily in Beijing. He is upset with President Trump for quite rightly pinning the blame for the pandemic on the CCP. Writing in the People’s World:

“Previous presidents were more sophisticated in their efforts against China, ‘pivoting to Asia’ and drafting trade agreements to box the country out; Trump uses the blunt instrument of tariffs and calls COVID-19 the ‘Chinese virus.’

“This serves several purposes. First, it creates a distraction from the abysmal U.S. response to the outbreak, which has left tens of thousands of probable cases untested, likely more. The population isn’t ready to weather this imminent calamity, despite the time afforded them by the control measures taken by China and other countries months ago. That is criminal negligence. …

“Second, it makes the virus someone else’s problem. If COVID-19 can be successfully branded a uniquely Chinese phenomenon, then the blame doesn’t fall to him. Never mind that the intense focus on China during the early weeks of the epidemic minimized the threat the virus posed to the rest of the world and made many in other countries complacent—shifting responsibility and rescuing what’s left of his image is all that matters to an egotist like Trump.

“Finally, and most troubling of all, it opens a new front in the ongoing anti-China offensive waged by the U.S. government and media. The rest of the planet is waking up to the fact China has done its best in a difficult moment and come out the other side with valuable experience. They’re asking for help in handling their own outbreaks after seeing what China has been able to accomplish, and China has been happy to provide it. The U.S. sees this as a loss of ground and is wildly striking wherever it can to win back terrain in an imagined battle for hegemony.

“Trump thinks this will help the U.S. back to the top in an influence game only he is playing.

“He couldn’t be more wrong. If the U.S. wanted to win some global goodwill, it could put aside these petty squabbles and get to work solving a crisis—not a ‘Chinese crisis’—that puts the whole world at risk.”

Chicago activist Tobita Chow is more closely affiliated with Democratic Socialists of America (DSA), but he wrote a March 18 article for the Liberation Road-linked website Organizing Upgrade. Chow explicitly called on American leftists to protect “China” from American sanctions or even military action.

“The current progressive response to the coronavirus has focused on solutions to the coronavirus like Medicare For All and paid sick leave and solutions to the recession like a Green New Deal stimulus package. While this is part of what we need, it is not sufficient to counter this emerging rightwing nationalist strategy and the militarism that it is leading us towards. A race-neutral response focused only on the domestic economy will leave untouched the racism, xenophobia, and nationalism that are coming at us. Antiracism and internationalism must play a much more central role in our counter-narratives than they have so far. …

“The antiwar movement must prepare for potential escalation with China, and the rest of the progressive movement infrastructure must get ready to back them up, in a way that we weren’t when we were on the brink of war with Iran less than three months ago. And we need to pick and escalate our own fights that demonstrate to the whole country where the real battle lines lie, fights that clarify that the greatest threat to us is not any other country, but our own unaccountable elites within the Trump administration and the corporations that seek to profit off of this crisis.”

America’s pro-CCP communists are propagandizing for an enemy nation on U.S. soil. They are effectively soldiers in an international information war designed to move U.S. public opinion toward socialism and to disguise and obscure CCP responsibility for this hugely damaging pandemic.

While these groups are clearly acting in line with CCP policy, it’s unclear whether any of them are registered as Chinese government agents under the Foreign Agents Registration Act (FARA).

Is the State Department investigating any of these organizations for possible FARA violations? If not why not?