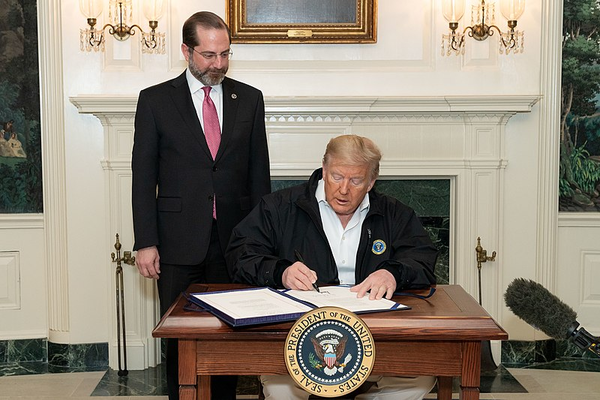 My brother who lives in Baltimore is a fellow black Christian conservative Republican. He phoned to warn me not to mention Trump to a senior relative. Fake news media’s corona-madness has driven her hatred to the extreme. Now, she wants him dead!

Our relative’s irrational hatred for Trump is exactly what Democrats/fake news media still strive to create since the day he was elected.

However, whenever Trump speaks directly to the American people, they believe him, gravitate to him, and love his America first agenda.

This is why Democrats/fake news media continuously seek to block Trump from communicating directly to We the People. Absurdly, they claim his tweeting is an impeachable crime. The Democrats’/fake news media was thrilled when coronavirus hit our shores, giving them an opportunity to demand that Trump stop holding rallies. The mega thousands who attend Trump rallies include a growing number of Democrats eager to jump aboard the Trump Train.

Fear not, folks. Every sinister scheme against Trump has failed and corona-madness will fail also. Millions are praying for our president. “No weapon formed against you shall prosper.” Isaiah 54:17

Laser-focused on the emotional and financial well-being of each and every American, Trump is seeking to get relief funds into their hands ASAP.

Insidiously evil Nancy Pelosi held up the process. She is callously exploiting the suffering of Americans to force Trump to sign a relief bill with funding for unrelated radical leftist agenda items. Pelosi wants wind and solar tax credits, mandates on corporate board diversity, advancing abortion, mandating the LGBTQ agenda, the Green New Deal and much more. Sen. Ted Cruz’s response was, “What in the hell does that have to do with this crisis?!”

I pray that Democrat party loyalists will finally realize that their party as they knew it is gone. It has morphed into an anti-Christian and anti-American enemy within, driven by a spirit of anti-Christ. The only thing, I repeat, the only thing Democrats care about is transforming America into their socialist/communist dream. Our economy, healthcare, emotional well-being and the loss of American lives are deemed acceptable collateral damage on the road to creating their anything goes sexually and totally government-controlled new America. Therefore, Pelosi and her minions do not give a rat’s derriere about you.

Remember that song, “A Little Good News”? I would like to thank businesses across America who are stepping up, producing hand sanitizer, masks, and providing much-needed goods and services. This is who we are folks. We are Americans.

My buddy alerted me to this good news that you will not hear reported by fake news media. Dennis Prager reported that a few weeks ago, Neil Ferguson of the UK’s Imperial College said that half a million would die of coronavirus in the UK and two to three million in the U.S. These scary numbers empowered leftists to demand that everything close down. Now, the scientist is saying 20,000 will die in the UK, not 500,000.

More good news is seeing commercials for Christian programming during secular TV shows. The Bible tells Christians to be salt. Salt makes a difference. I have criticized churches for behaving in a cowardly manner, not adding salt to our culture. During the corona crisis, more and more pastors are speaking out about how our culture has gone down the wrong road. It is funny how trouble always brings us back to God and on our knees.

It is good news that God has blessed us with Donald J. Trump in the Oval Office. Democrats/fake news media believe no cost is too high to end Trump’s presidency. This includes collapsing the U.S. economy and destroying and even ending American lives.

Despite Democrats/fake news media launching a tidal wave of false reporting, claiming he is willing to murder Americans to profit his big-business buddies, Trump is remarkably unaffected. Behaviorally, Trump says, “Screw their false reporting! I’m going to do what is best for the American people. They want to get back to work. They want their lives back.”

Our courageous president has announced plans to cautiously begin reopening America in various sectors ASAP. Optimism is contagious. Trump believes our economy will bounce back stronger than ever. I agree.

We are witnessing a slight “right turn” in America, back to God, family, patriotism, principles, and values which have made America great. I say, “Praise the Lord!”