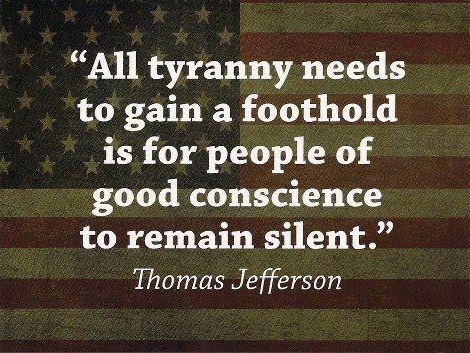 For those that are not students of history and not knowledgeable about the U.S. Constitution and our country’s founding, the general public view on most political issues tends to be dependent on one’s personal experiences or world view. Many people have a hard time relating to political issues that do not have a direct effect on them or their immediate family.

A disconnect seems to be present when there is no pain to reinforce the reality of the issue at hand. Let’s use the surveillance state that has been established in America piece by piece since 9/11. How many times have you heard someone say that they didn’t care if the government is spying on citizens because they haven’t done anything wrong? To those of us that pay attention, this is an obvious one-way ticket to serfdom. What would it take for this person to change their tune?

Remember that right and wrong in this era of big government is relative.  White is black, and black is white. What is good is evil and vice versa. The ideological force that is behind a local/state/federal government determines the extreme nature of the law and enforcement of that law. An example would be California, as they have criminal charges that coincide with a person using the wrong gender pronoun and offending someone. This was a result of legislation signed by former Governor Jerry Brown, and yes, it is real.

Let’s go back to the person that thinks that they are a model citizen and that government surveillance doesn’t affect them. Let’s say that this individual lives in a state that uses this surveillance technology and the state government decided that this individual was doing something that they do not condone in the confines of their own home and they responded with a 4 AM no-knock raid, that results in this person’s arrest and the death of his dog.  For the sake of this discussion, let’s say that this raid was a direct result of the state’s surveillance program as a drone was frequently left hovering outside this individual’s window documenting the said, “violation.” How do you think this will change this citizen’s opinion on the surveillance issue?

People seem to be OK with government snooping until the consequences of that snooping affect them directly.  It is sad that an otherwise reasonable person, with the ability to observe and think, cannot see the societal consequences of this government overreach. Have we become so collectively narcissistic, that we will sit and watch our neighbor suffer because we are doing fine and not suffering with them?

The reason why we are not sitting by and allowing this abuse that is on the table now, is because everyone seems to be directly affected by what is going on.  Millions of people are losing their jobs every week and not many people can say that they are not feeling the pinch.  That is one of the main reasons why we have such unity at this time. Almost everyone is feeling this one.

A great example of this is a post-war confession written by German Lutheran pastor Martin Niemöller.  This powerful piece demonstrates just how apt we are to stand by and allow terrible things to happen around us, as long as it doesn’t affect our world.

What makes this COVID-19 pandemic a significant event? It is not the virus itself and I don’t think it is the response, even though a global shutdown is unprecedented. In this particular case, it has been the American people coming together to stand against a common threat to our constitutional republic.

Seeing all of the protests in states that have revoked constitutional rights in the name of safety is reassuring and it has brought people together. We came together on 9/11 for a short time, but I feel this breeds a deeper connection between average people. A connection that is free of political posturing and shows just how we are different from the rest of the world.

Most people in the world would love the opportunity to stay home from work and get a government check to accommodate their needs.  Here in America, we take pride in a hard day’s work and we appreciate the fact that we have an opportunity to contribute part of ourselves to society.  Not with our money, but with our blood sweat and tears. This is American exceptionalism at its best.