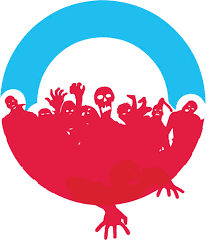 Mary and I live in a tiny town in West Virginia. Our grocery shopping options are 26 miles away in Maryland and 45 miles away in Virginia. Maryland stores refused to allow us to enter because we did not have masks. We drove to Virginia. It was refreshing seeing Virginians free to wear masks or not. I noticed that the majority of shoppers wearing masks were young people. Do they believe fake news media more than we older Americans?

Stopping for gas, the gas-pump TV monitor showed the propaganda commercial we see plastered all over TV. “Stay home. Stay Alive.” With fake news media promoting their lie 24/7 that going outside means death, it is not surprising that many Americans remain willing to surrender their constitutional freedoms to Democrat/RINO, anti-Trump, and anti-American scammers.

Every day we are seeing more studies that confirm that COVID-19 is not deadlier than the flu. Numerous health experts say social distancing is not the correct solution. The total shutdown of America was not necessary.

Meanwhile, Democrat and RINO governors continue to decree absurd overreaching restrictions to supposedly “protect us.” The Raleigh N.C. police declared “protesting is a non-essential activity” and arrested a woman. Michigan gov. Gretchen Whitmer decreed, “All public gatherings of any size are prohibited.” Bam! There goes our foundational right to “peaceably assemble.”

In some states, residents are not allowed to visit friends or relatives. People with more than one home are banned from traveling between them. Big box stores cannot sell carpet, seeds, U.S. flags, and paint. A paddle-boarder out on the water far from anyone was arrested at Malibu Beach. In California, police gave $1,000 tickets to people watching the sunset in their cars. In various states, the freedom to worship God in your car in parking lots is banned.

A threat by the city of Los Angeles scared the crap out of me, as it should every American. The city will cut off water and power of those who do not comply with its outrageous restrictions. Wow! Are we no longer living in America?

The U.S. Constitution is a sacred document that has protected our freedoms since our founding. It is intolerable that governors can decree it null and void by simply saying they are doing it for our good. As my late momma would say, “Help us, Lord Jesus!”

Recently in my tiny West Virginia town, we enjoyed a beautiful sunny day. Two moms walked side by side pushing their babies in strollers. I heard laughter and yells from kids at the schoolyard playing games and basketball. Six motorcyclists had lunch beside the main road through town. People were thrilled to be outside interacting.

Governors insisting on keeping Americans in cages is unsustainable. But the greater question is why are Democrat governors so hellbent on doing it? Clearly, the lockdown is no longer about protecting us from COVID-19. They relish having total control of every aspect of our lives. Let us not forget that HillaryCare would have denied healthcare to gun owners.

Ponder what your life would be like if Democrats gained control of the White House, the House, and the Senate. Kiss all your constitutional freedoms good-bye.

I repeatedly find myself asking, “What is wrong with Democrats and the American left?” Why is everything they want harmful to American citizens? Why is their thinking so dramatically different from that of average Americans? I realize they have globalist and progressive agendas. But still, why are they obsessed with killing as many American babies as possible even after they are born?

Democrats and the American left claim to be advocates for LGBTQ. Why do they praise Islam which advocates killing homosexuals and despise Christianity which courts them with love?

Fake news media and Democrats scared America into a total shutdown. Then, Democrats in Congress refused to sign on to coronavirus relief checks for suffering Americans unless they were allowed to include funding for their pet projects unrelated to the shutdown or virus.

Why have Democrats used the coronavirus to release felons who are harming citizens? Twenty-six million and counting Americans have lost their jobs due to the shutdown. Why are Democrats pushing for illegal aliens to be allowed to enter our country to take jobs?

Do you see a pattern? Folks, I could go on and on with things Democrats want which harm Americans. Again, I ask. What is wrong with these people?

I am extremely grateful that Americans are rising up across our great nation, demanding the return of our freedoms. God is on our side. Please join the rebellion.

The mission is for the United States to have the ability to inoculate 300m people by January 2021. In a collaboration between Health and Human Services, the FDA and the Department of Defense, the DOD has a unique division known as The Research Regulatory Oversight Office (R2O2) which is the P&R component level oversight office for the authorities and responsibilities under Department of Defense (DoD) Instruction 3216.01, “Use of Animals in DoD Programs.” The R2O2 manages animal care and use review and oversight processes for research conducted and supported by the Uniformed Services University of the Health Sciences and the Armed Forces Radiobiology Research Institute, both of which are accredited by AAALAC as is required for all DoD institutions housing animals for Research, Development, Testing and Evaluation or training.

The Trump administration is organizing a Manhattan Project-style effort to drastically cut the time needed to develop a coronavirus vaccine, with a goal of making enough doses for most Americans by year’s end.

Called “Operation Warp Speed,” the program will pull together private pharmaceutical companies, government agencies and the military to try to cut the development time for a vaccine by as much as eight months, according to two people familiar with the matter.

As part of the arrangement, taxpayers will shoulder much of the financial risk that vaccine candidates may fail, instead of drug companies.

The project’s goal is to have 300 million doses of vaccine available by January, according to one administration official. There is no precedent for such rapid development of a vaccine.
Last month, Trump directed Health and Human Services Secretary Alex Azar to speed development of a vaccine, and administration officials have been meeting on the effort for three to four weeks, one of the people said. A meeting on the project was scheduled at the White House on Wednesday.

The people familiar with the project and the administration officials asked not to be identified because it hasn’t yet been publicly announced.

A spokesman for the Department of Health and Human Services, Michael Caputo, said the president refused to accept the timeline for standard vaccine development and encouraged a breakthrough process.
Speeding Up

Vaccine development is typically slow and high risk. The project’s goal is to cut out the slow part, the people said. Operation Warp Speed will use government resources to quickly test the world’s most promising experimental vaccines in animals, then launch coordinated human clinical trials to winnow down the candidates.
The group is discussing which Americans might be vaccinated first, as the medicines would likely roll off production lines in batches, one of the people said. The project would be funded from money already available to the government and won’t require new authority from Congress, one of the people said.

There are at least 70 different coronavirus vaccines in development by drugmakers and research groups, according to the World Health Organization. But drugmakers have not coordinated their efforts to the extent they could through the Warp Speed project, one of the people said.
Under the effort, the Defense Department would make its animal research resources available for pre-clinical work on vaccines.

The group is also discussing the use of what’s known as a master protocol to test the vaccines. Instead of multiple clinical trials run by each drugmaker, competing for patients and resources, the government would organize one large trial to test several vaccines at once and advance the most promising ones.
Oxford Vaccine

The Trump administration isn’t alone in trying to fast-track a vaccine. One of the world’s most promising vaccine candidates has been developed by a team at Oxford University in London. Last month, scientists at the U.S. National Institutes of Health innoculated six rhesus macaques with the Oxford vaccine and then exposed them to the coronavirus, the New York Times reported.

All six were healthy more than four weeks later, according to the Times. The researchers are currently testing their vaccine in 1,000 patients and plan to expand to stage two and three clinical trials next month involving about 5,000 more people.

The Oxford group told the Times they could have several million doses of their vaccine produced and approved by regulators as early as September.

In the U.S., the Bill & Melinda Gates Foundation has meanwhile shifted much of its research effort to the coronavirus virus.

More than 1 million cases of coronavirus have been confirmed in the U.S., and at least 58,000 people have died from the illness it causes in the last two months. Widespread social-distancing measures have helped slow the spread, but at the cost of millions of jobs and losses to the economy that experts fear will take years to recover.

Along with wider diagnostic testing for the virus and an effective therapeutic drug, a vaccine is one of the key tools for reducing long-term risk from the virus. Testing can help contain an outbreak in its early stages, or after it’s been curbed enough to manage. A therapy can help those who get sick, reducing the risk of death and the burden on hospitals.