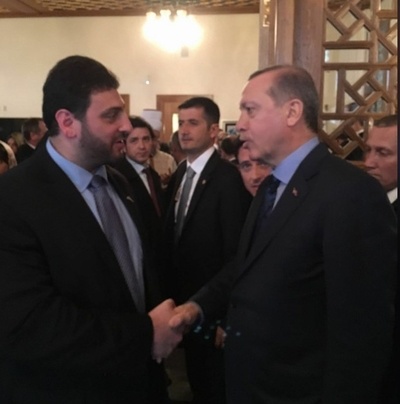 He’s a saber-rattling authoritarian who jails journalists and opponents, threatens neighbors, and wants to rebuild an Islamist empire.

But to Osama Abuirshaid, executive director of the anti-Israel group American Muslims for Palestine, Turkey’s president is “a leader in the meaning of the word and a legitimate ruler, and he is above this and is humble in manners.”

Abuirshaid raced onto Facebook Monday with Ed Grimley-like excitement to tell the Arabic-speaking world about his latest meeting with his newest, bestest pal, Recep Tayyip Erdogan.

That prompted a rebuke from the U.S. State Department against the head of its NATO ally.

“President Erdogan’s continued outreach to this terrorist organization only serves to isolate Turkey from the international community, harms the interests of the Palestinian people, and undercuts global efforts to prevent terrorist attacks launched from Gaza,” the State Department said. “We continue to raise our concerns about the Turkish government’s relationship with Hamas at the highest levels. This is the second time President Erdogan has welcomed Hamas leadership to Turkey this year with the first meeting occurring February 1.”

Erdogan’s support for Hamas, however, runs much deeper than a meeting.

“Turkey has given passports to a dozen Hamas members in Istanbul,” Reuters reported Wednesday, citing a senior Israeli diplomat.

“These are not foot soldiers but the most senior Hamas operatives outside of Gaza,” an unnamed source told the Telegraph earlier this month. “[They] are actively raising funds and directing operatives to carry out attacks in the present day.”

Those tasks are made easier for Hamas operatives carrying Turkish passports, who can travel more freely throughout the world.

And that support might help explain Abuirshaid’s giddiness about meeting with Erdogan. A dossier published last month by the Investigative Project on Terrorism (IPT) chronicled Erdogan’s connections to two groups which were part of a U.S.-based Hamas support network, and how his organization, AMP continues to engage in similar fundraising, propaganda and lobbying today.

Abuirshaid’s embrace of Erdogan’s Turkey dates back years. In 2016, for example, he posted a picture of himself shaking Erdogan’s hand. Erdogan’s foes, Abuirshaid wrote, “hate him because he stands with the ambitions of Arab peoples with freedom and dignity…They hate him because he said no to Israel and stepped on decades of Turkey’s collusion with the time of ′secularists′ rule …”

Last February, Abuirshaid spoke in Istanbul at the Popular Conference for Palestinians Abroad. “America,” he said, “represents the umbilical cord to the existence of that state [Israel] and the endurance of its power and to remain the dominant power in the region, which enjoys all of the American support that practically made it the number one power in the entire region.”

When tearing down Israel is your life, face time with a stalwart Hamas supporter like Erdogan does seem like a big deal.

Monday’s meeting wasn’t planned, Abuirshaid explained. He was among a group U.S. Council of Muslim Organizations (USCMO) members en route to Lebanon to see the damage done by the Aug. 4 ammonium nitrate explosion at Beirut’s port – a flight that stops in Istanbul – so they thought, ‘Why not see if Tayyip is around?’

Okay, we’re embellishing. Abuirshaid didn’t write it like that. But he did note that they received an immediate response and the meeting was on. But our snark is justified as the following extended excerpt of Abuirshaid’s fawning post, translated by the IPT, shows:

I was asked to read a certain topic, and I was honored. I addressed him: ′′Mr. President,” and he addressed me with ′′Osama,” “Mr. Osama,” and sometimes he addresses us all with ′′my brothers.”

After we finished he gave us a group of gifts of high symbolic value, one of which is his vision for new Turkey, and the book below is signed in my name.

Don’t blame people for their love of Erdogan, as he is the maker of the renaissance of his country, and the supporter of many oppressed people, in Palestine, Syria, Libya… etc.

Some will claim that he only cares about Turkey’s interests, although this is half the truth, he also cares about the pride of Muslims, I reply by saying, I wish many of our leaders would be like him and also care about their country’s interests. 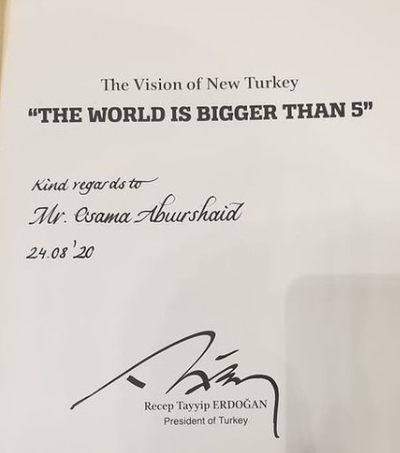 Abuirshaid posted this image from the autographed book Erdogan gave him.

Turkey’s economy has suffered greatly under Erdogan and may be on the brink of collapse. He has fighters in Libya, Syria, and Iraq and is widely believed to harbor aspirations to be seen as the leader of the Sunni world. But he’s hostile toward Israel and supportive of Hamas. To Abuirshaid, that’s all that matters. 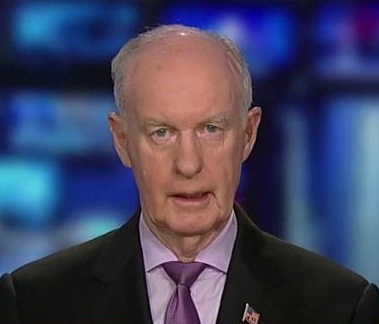 Lt. Gen. Tom McInerney (Ret.) with Audrey Russo of REELTalk with an update on the John Durham investigation, the truth about the pandemic, and the latest on the presidential election. 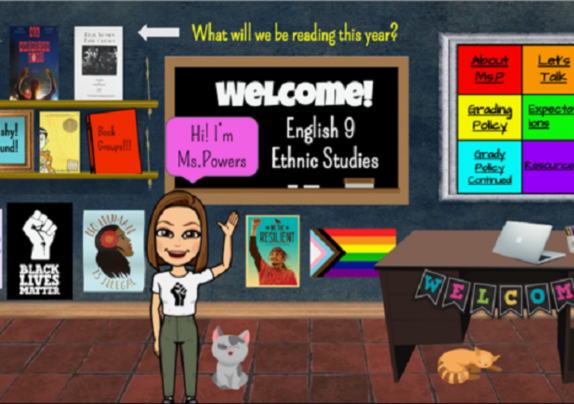 A glance at the hatred being force-fed to American kids.

The fall semester has just begun in California. It’s pretty much all online, distance learning. This has been enormously helpful – in an awakening kind of way – for parents, also still stuck at home, to observe the increasingly anti-American, antisemitic, and frankly, Marxist curricula being force-fed to their children. The flagship courses for that indoctrination go under the label of “ethnic studies”. Governor Gavin Newsom just signed a bill into law on 17 August 2020 that makes an ethnic studies course a requirement for graduation from any California State University, beginning with the 2021-2022 academic year. Lest anyone think that ethnic studies in California will be just a broad-based neutral overview of American diversity (the E Pluribus Unum kind), a look at what is actually contained in such curricula already this year will be instructive.

Let us begin by recalling what former FBI agent W. Cleon Skousen told us about Communist Goals for America back in 1958, the year he published “The Naked Communist”. The content of that book, and especially those 45 Goals found in Chapter 13, were compiled from testimony by former Communists before Senator Joseph McCarthy’s Subcommittee and the counterpart House on Unamerican Activities Committee in the 1950s. Number 17 of that list of Communist Goals for America stated: “Get control of the schools. Use them as transmission belts for socialism and current Communist propaganda. Soften the curriculum. Get control of teachers’ associations. Put the party line in textbooks.”

Now, fast forward to the English 9 Ethnic Studies curriculum for the Santa Barbara Unified School District (SBUSD) at the high school level. The colorful syllabus for the course was sent to students as a PowerPoint in mid-August 2020. In the first slide, an image of a cheerful “Ms. Powers,” who wears sneakers and a T-shirt with the black power-communist fist salute, waves to the students in front of a backdrop that features the Black Lives Matter logo and a rainbow flag. In the next slide, she tells the students a bit about herself: “My name is Nicole Powers. I am a bi-racial, Asian-American cisgender female who uses she/her/ella pronouns.”

Below the introductory slide are listed the “Units of Study” for the August-December 2020 semester. Week One is devoted to “Community Building”. Weeks 2-5 are about “My Place in the Community.” Weeks 6-9 are dedicated to “Protest.” (The syllabus doesn’t specify if that will include extracurricular activities on-site in Chicago, Portland, or other field trip location.) Weeks 10-12 are for “Intersectionality,” and Weeks 13-15 are about “Stereotypes and Internalized Racism.” Yes, this is an English class. But don’t be too sure about any actual “English language” content.

The Conference on College Composition and Communication, which is part of the National Council of Teachers of English, released a document in July 2020 that demands something called “Black Linguistic Justice.” Its rallying cry, apparently in its preferred style of “English” states: “This Ain’t Another Statement! This is a DEMAND for Black Linguistic Justice! PeriodT!” [sic]. Among its demands are that “teachers stop using academic language and standard English as the accepted communicative norm, which reflects White Mainstream English!” and “…teach Black students about anti-Black linguistic racism and white linguistic supremacy instead!”.

Back in Santa Barbara, it seems they have taken that cri de coeur to heart (as it were) with images of several books the English 9 Ethnic Studies class will be reading. One of them is entitled “If I Was [sic] Your Girl”, by Meredith Russo. It’s about a “girl” who used to be a boy at her old school. “Moby Dick,” “The Deerslayer”, and “Wuthering Heights” are not to be seen. But “A Young People’s History of the United States,” by the communist Howard Zinn is there. So is “A Queer History of the United States for Young People” by Michael Bronski. The Fall 2020 Semester Course Outline delves into topics like “beneficiaries of privilege” in society, the “role of protest in society,” “Intersectionality”, “Stereotypes,” and “Social Justice.” A student writing guide instructs them to describe ways they are privileged or oppressed; concepts of race, and cultural and social identity; and, what it means to be an American and whether there is an American culture.

So, where did all this come from?

A good place to look is the online Black Lives Matter Resource Guide as published at the website of a group called “The Peahce Project.” (No, that’s not a typo.) Its list of resource categories includes: “White Privilege,” “Police Brutality,” “Intersectionality,” “Feminism,” “LGBTQ+,” “History of Slavery/Racism,” “Asian Allyship,” “Anti-Racism,” “How Media Affects Our Perspective,” and “White Privilege.” If it sounds familiar, it should. There are articles, books, and videos listed for each category.

And just to be sure that everyone understands under whose domination our schools now operate, there’s this. The Vermont Essex Westford School District Board voted unanimously in early August 2020 that all of its schools will fly a Black Lives Matter (BLM) flag throughout the 2020-2021 school year. The BLM flag will fly alongside LGBTQ flags. No mention of whether an American flag or Vermont State flag will also be flown.

Parents and other community members in Vermont as well as the Santa Barbara Unified School District are none too pleased. A group called “Fair Education Santa Barbara” that was formed in 2019 to counter this sort of Critical Race Theory, divisive identity politics, and implicit-bias training has argued in a series of court declarations that such training is not only divisive, but “discriminatory toward white people, men, and Christians.” The group, with growing support from Santa Barbara families, argues that this curriculum has been promoted under contract with the SBUSD by an organization called Just Communities. Unfortunately, an Ethnic Studies Community Forum that was planned for 4 August 2020, and would have given a platform for families’ concerns to be heard, was postponed indefinitely.

One set of parents summed up their dismay this way: “We were horrified to see a dangerously deceptive, radical political agenda disguised as an English + Ethnic Studies class.  The SBUSD is deceitfully and purposefully recruiting our children behind our backs with symbols of communist hate.  We are in disbelief that four weeks of this class focuses on “Protest” followed by three weeks of “Intersectionality.”  Clearly, they are recruiting our sweet, innocent children for radical rioting like we see it Seattle and Portland and grooming them for lawlessness behind portals made accessible only to the students.”

Now, multiply that many times over for those parents who are likewise concerned but do not (yet) speak out. Until then, others must be their voices.